President Trump previewed his heavily anticipated Friday showdown with Russian counterpart Vladimir Putin with a series of early morning tweets, promising to "represent our country well" and ambiguously adding the two larger-than-life leaders had "much to discuss."

Trump and Putin were set to participate later Friday morning in a bilateral talk at the G-20 summit in Hamburg, Germany. Given the controversy surrounding alleged Russian meddling in the U.S. presidential election and Democrats' efforts to tie Trump to Putin, the first meeting between the men is being closely watched. The men quickly greeted each other early Friday, with Trump shaking Putin's hand and patting him on the back.

"I look forward to all meetings today with world leaders, including my meeting with Vladimir Putin. Much to discuss," Trump tweeted.

He added: "I will represent our country well and fight for its interests! Fake News Media will never cover me accurately but who cares! We will [Make America Great Again]!"

The Trump-Putin powwow comes amid shifting Trump rhetoric, as the president has begun taking a harder line with Russia. Trump was complimentary of Putin as recently as the October presidential debates, and during the election he often said he hoped the U.S. and Russia could improve relations.

But since assuming office Trump's optimism has waned, and he's criticized Russia for its unflinching support of Syrian leader Bashar Assad, even as he used chemical weapons. The U.S. also incurred Russian ire by agreeing to sell patriot missiles to Poland, and in a highly praised speech in Warsaw on Thursday, Trump specifically called out Russia for its subversive activities worldwide.

"We urge Russia to cease its destabilizing activities in Ukraine and elsewhere and its support for hostile regimes including Syria and Iran, and to instead join the community of responsible nations in our fight against common enemies and the defense of civilization itself," Trump said.

Still, the change in tone has not been enough for some U.S. lawmakers, who are also urging Trump to confront Putin face-to-face over the alleged election meddling. It remained unclear Friday what Trump's agenda was for his meeting with Putin, but he did offer an odd Twitter aside Friday that hinted at the issue.

"Everyone here is talking about why John Podesta refused to give the DNC server to the FBI and the CIA. Disgraceful!" Trump said. 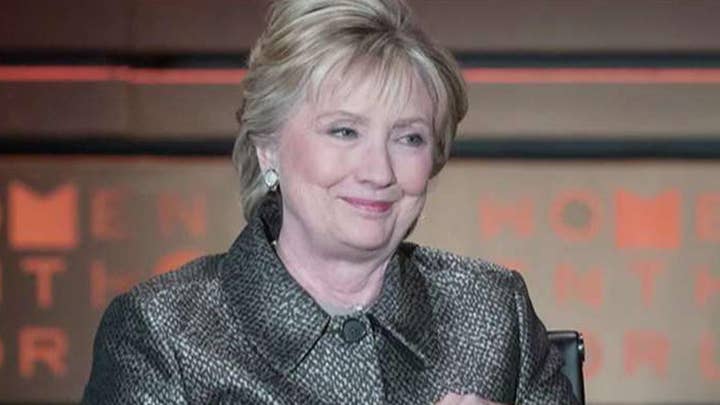 Though the critique appeared to be aimed more at his Democratic opponents, the Russians are accused of being behind the scheme to obtain Podesta's emails via a phishing scam and leak the contents to antisecrecy website WikiLeaks. Podesta served as the chairman of Democratic presidential nominee Hillary Clinton's campaign.

Asked on Thursday about the election meddling, however, Trump conceded he believed Russia was probably responsible -- but was quick to add the Kremlin may not have been the lone foreign entity trying to sew discord in American politics.

The meeting between Trump and Putin is scheduled to last 35 minutes and will take place during the G-20 summit. Sources told Fox News that only Trump, Secretary of State Tillerson, an interpreter and Putin will be in the room.

The two world leaders are famous for their alpha-male personas. Putin is known as a skilled statesman, while Trump defines himself as a great businessman and world-class negotiator.

The Putin meeting is the highlight of a hectic, four-day European visit for Trump, who addressed thousands of Poles in an outdoor speech in Warsaw, Poland, on Thursday. He met in Germany with Chancellor Angela Merkel, the summit host, and had dinner with two Asian allies -- Japanese Prime Minister Shinzo Abe and South Korean President Moon Jae-in -- to discuss North Korea's aggression.