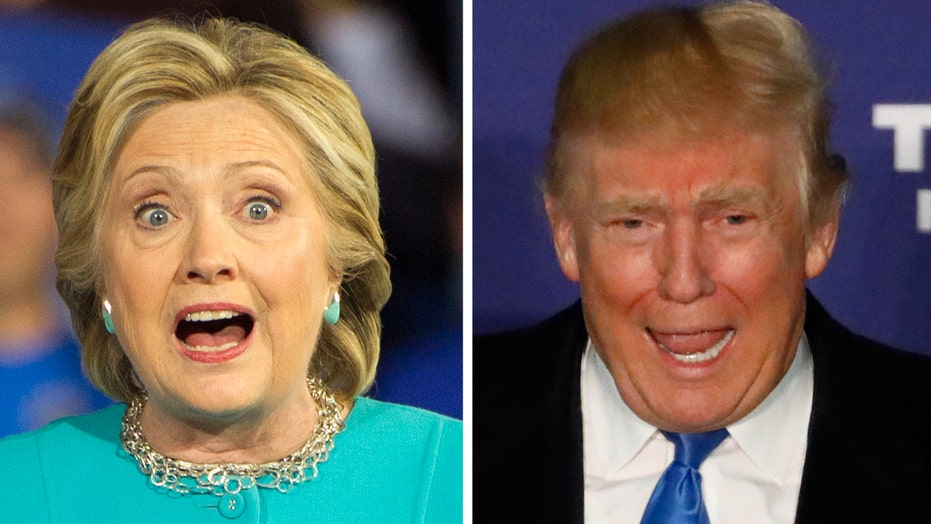 Donald Trump is moving into Democratic territory in the final days of his improbable White House bid, hoping forays into Minnesota and Michigan on Sunday and Monday will give him enough support from still-undecided voters for a come-from-behind victory against Democratic rival Hillary Clinton.

“Hillary doesn’t come here. … Don’t vote for her,” Trump said at a rally Sunday in Minneapolis, Minnesota, which has not voted for a Republican presidential nominee in 44 years.

Beyond his attacks on Clinton, Trump made his larger case in Minnesota by warming residents about the spread of radical Islamic terrorism and the rising costs of ObamaCare, which Clinton supports and that Trump has vowed, if elected, to repeal and replace.

“We will not allow what has been happening to the great state of Minnesota to happen any longer,” Trump said. “We will make America great again.”

Polls show Trump closing Clinton’s lead in the final days of the race and having some momentum going into Election Day, on Tuesday.

The announcement by FBI Director James Comey on Sunday that the agency has concluded without charges a 10-day probe into recently-discovered Clinton emails while she was secretary of state was a blow to the Trump argument that Clinton, if elected, would assume the White House under federal investigation.

The Minnesota event was one of five that Trump would host Sunday.

However, she was in Michigan on Friday and will return Monday.

President Obama will also be in Michigan on Monday, to headline a rally at the University of Michigan, Ann Arbor.

Clinton was up by nearly 12 percentage points in the state in late-October, but her lead has been cut to less than 5 points over the past 16 days, according to the RealClearPolitics polls average.

A Fox News national poll released Friday shows Clinton leading Trump by 2 percentage points, 45-to-43 percent, after being ahead by double-digits in some polls just a few weeks ago.

Trump has led only once since winning the GOP primary this spring -- by 1 percentage point, in late-July, after the Republican National Convention.

Top Clinton strategist Joel Benenson disagreed Sunday with the argument that the campaign has had to redouble its efforts in states like Colorado, Michigan, New Mexico and Virginia.

“We’re playing offense in every state,” he told Fox News.

Benenson also said that returning to Michigan was always in the plans, describing it as a “game day” state because it has no early voting.

“We have to make sure we get there in the last few days, keep people ginned up, getting them out to vote,” he said. “That's what you're seeing in some of these states.”

Benenson also suggests that a late fundraising surge has allowed for the final-hour TV ads in those states.

Trump, a first-time and outsider candidate, started Sunday in Iowa, then flew to Minnesota and Michigan before finishing in battleground states Pennsylvania and Virginia.

Michigan, which Trump will visit again Monday, has not elected a Republican nominee since the 1988 election.

The Virginia race appeared all but lost to Washington Republicans, considering that last month they began reallocating resources. However, Trump and running-mate Mike Pence have returned in the closing days, as the race with Clinton tightens.

Estranged from much of the Republican establishment that he has vowed to dismantle if elected, Trump, with the exception of Pence, has essentially campaigned alone, though Trump’s children where active in get-out-the vote efforts this weekend.

“I don’t mind being an outsider,” Trump said Sunday in Iowa, another battleground state.

Comey said Sunday in a letter to Congress that there is no evidence in the newly discovered emails to warrant criminal charges against the Democratic presidential nominee.

As of late Sunday, Clinton had yet to mention the issue on the campaign trail.

He made no direct mention of the FBI's decision and continued to insist --without evidence -- that Clinton would be under investigation during her potential presidency.

Pence said at a rally in North Carolina: “The FBI last summer concluded that Hillary Clinton having classified documents on that private server was extremely careless.  And I guess today, I don’t know if you heard, today they announced that they had not changed that conclusion. But you know, mishandling classified information is a crime.”

While Comey was vague in his initial description of the inquiry, he said Sunday that the FBI reviewed communications "to or from Hillary Clinton while she was secretary of state."

As the campaign's final weekend drew to a close, more than 41 million Americans had already cast their ballots in early voting.

During remarks at a black church in Philadelphia on Sunday morning, Clinton urged voters to choose "unity over division" as she sought to close a caustic presidential campaign on an uplifting note. She warned that President Obama's legacy is on the line, part of her strategy to shore up black voters who may be less enthusiastic about her than the president.

"If we come together with the common vision, common faith, we will find common ground," Clinton declared.

Clinton then headed to New Hampshire with Khizr Khan, the Gold Star father who delivered a stinging indictment of Trump at the Democratic convention. Her high-wattage allies also fanned out across the country, including Obama, who was joined by musical icon Stevie Wonder at a rally in Florida. NBA star LeBron James joined Clinton in Cleveland, Ohio.