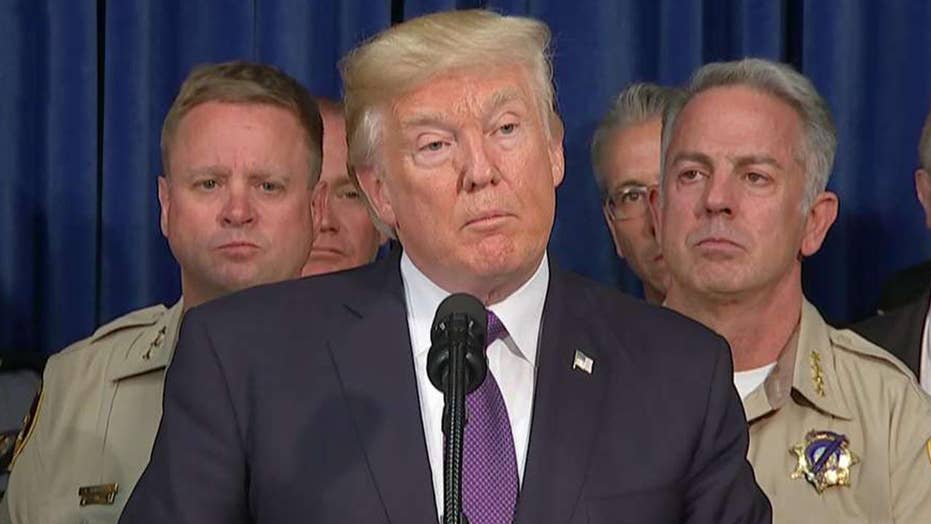 President Trump: America is a nation in mourning

President Trump, visiting Las Vegas in the wake of the country's deadliest mass shooting, lauded the heroic first responders for their “bravery,” thanked the nurses and doctors for their “incredible” efforts and consoled survivors by telling them “we’re there for you.”

“Words cannot the describe the bravery that the whole world witnessed on Sunday night," the president said Wednesday, during a brief speech at the Las Vegas Police Department Command Center. "Americans defied death and hatred with love and with courage.”

Trump told first responders: “A grateful nation thanks you.”

Fifty-eight people were killed and more than 480 injured in the attack when a deranged sniper fired from the 32nd floor of a casino.

The president’s motorcade passed the scene of the shooting on the way to University Medical Center, where he met earlier with victims, families and medical professionals.

The president said his message to the victims is “we have a great country, and we’re there for you.” Trump said he invited some of the patients to come to Washington to visit the White House.

“And believe me, I’ll be there for them,” he said.

Trump praised the doctors and nurses for their “professionalism,” telling them “it’s incredible what you’ve done.”

Las Vegas is a city the president knows well: Trump International Hotel Las Vegas is only a few miles down the road from Mandalay Bay Resort and Casino, where police say a man named Stephen Paddock smashed two windows in his suite overlooking a country music festival on Sunday night and opened gunfire on concertgoers.

In recent days, Democrats have called for new gun control measures in the wake of the massacre. Both Trump and congressional Republicans have said it’s too early to discuss any legislative actions that could be taken.

A reporter asked Trump about the issue of gun violence during his hospital visit, but the president said: “We’re not going to talk about that today.”

“There's a time and place for a political debate, but now is the time to unite as a country,” Sanders said. “There is currently an open and ongoing law enforcement investigation. A motive is yet to be determined.”

On Tuesday, Mitch McConnell, the Senate majority leader, called it both “inappropriate” and “premature” to discuss whether Congress should consider gun control legislation.

“Look the investigation has not even been completed, and I think it’s premature to be discussing legislative solutions, if there are any,” McConnell told reporters, when asked if he could support new gun restrictions in response to the country’s deadliest mass shooting.

On Monday morning, just hours after the shooting, 2016 Democratic presidential nominee Hillary Clinton called for the defeat of a National Rifle Association-backed bill in Congress that would ease regulations on gun silencers.

“The crowd fled at the sound of gunshots,” Clinton tweeted. “Imagine the deaths if the shooter had a silencer, which the NRA wants to make easier to get. Our grief isn't enough. We can and must put politics aside, stand up to the NRA, and work together to try to stop this from happening again.”

Likewise, Connecticut Democratic Sen. Chris Murphy, an ardent proponent of gun control, blasted what he referred to as “legislative indifference” on guns.

“It's time for Congress to get off its ass and do something," he said.