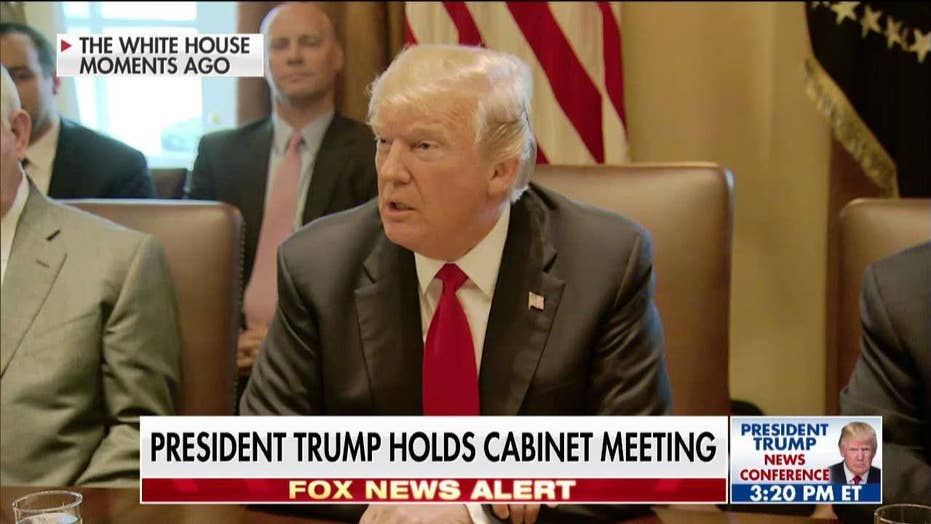 Trump: 'We Are Going to Take a Strong Look at Our Country's Libel Laws'

President Trump said Wednesday he wants to toughen the country’s libel laws, a week after accusing the author of an unflattering book about his presidency of publishing defamatory information about him and his family.

“Our current libel laws are a sham and a disgrace and do not represent American values or American fairness,” the president told reporters at the White House, as he met with his Cabinet for the first time in 2018.

Trump said those who have been libeled should have “meaningful recourse.”

“So we're going to take a strong look at that,” Trump said. “We want fairness. You can't say things that are false, knowingly false, and be able to smile as money pours into your bank account.”

In a letter to Wolff and the book’s publisher, Trump’s lawyers demanded the halting of the book's publication and "a full and complete retraction and apology."

“Mr. Trump hereby demands that you immediately cease and desist from any further publication, release or dissemination of the book,” the attorney, Charles J. Harder, wrote in a letter obtained by Fox News.

Trump’s attorney didn't cite specific passages, but he argued the book includes “false/baseless statements” that could be “defamation by libel.”

“In the near future, you should expect to hear from this office in greater detail on all of the foregoing issues,” he wrote.

The publisher rejected Trump’s demands, and instead sped up the release of the book.

The book also caused a dramatic falling out between Trump and his former adviser Stephen Bannon, who was quoted speaking ill of members of the president’s family.