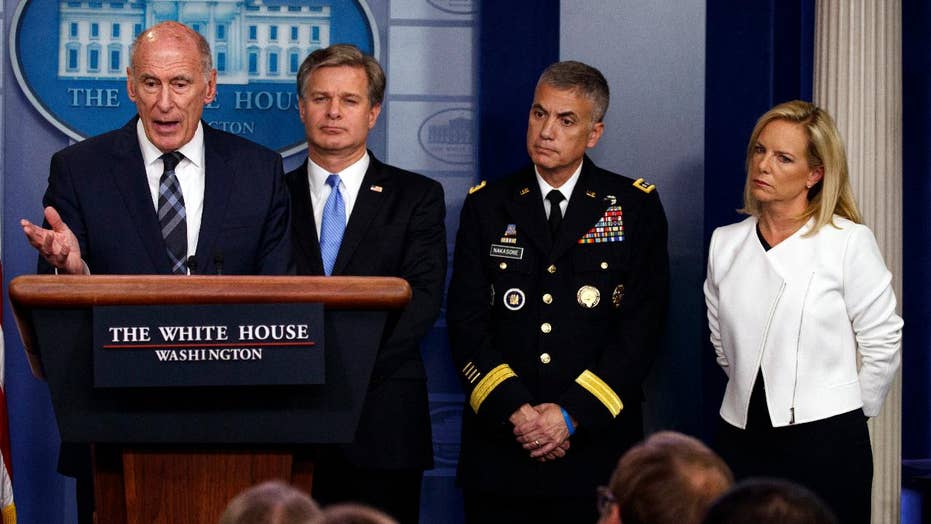 The heads of different national security and intelligence agencies spoke out from the White House about Russian election meddling. They detailed some of the efforts being made to combat it including sharing classified information with social media executives and tech companies so they can help monitor their platforms.

Top Trump administration officials warned Thursday that Russia is posing a sustained threat to American elections with its influence operations, saying “democracy itself is in the crosshairs.”

Top national security and intelligence officials sounded the alarm during a high-powered White House press briefing, raising concern about foreign operations that pose a threat to the 2018 midterms and even the 2020 election.

“We continue to see a pervasive messaging campaign by Russia to try to weaken and divide the United States,” Director of National Intelligence Dan Coats said.

The briefing showed the administration renewing its public commitment to combating the Russian threat, just weeks after President Trump faced broad and bipartisan criticism for initially appearing to accept Russian President Vladimir Putin’s denial of meddling during their summit in Helsinki.

"A single attack can have widespread and cascading consequences. ... It's not just risk to prosperity, privacy, and infrastructure," Homeland Security Secretary Kirstjen Nielsen said. "Our democracy itself is in the crosshairs."

Coats said the threat is "real" and "continuing" and "we're throwing everything at it."

“Our focus today is simply to tell the American people we acknowledge the threat,” Coats said. “It is real. It is continuing. And we’re doing everything we can to have a legitimate election.”

While the upcoming midterm elections are certainly a target for Russia and other nations with influence capabilities, FBI Director Christopher Wray stressed that “this is not just an election cycle threat.”

“Our adversaries are trying to undermine our country—whether it’s election season or not,” Wray said, noting that the intelligence community has met with top social media and technology companies to provide classified briefings so they can better monitor their platforms. “It’s going to take all of us working together—this threat is not going away.”

Wray added: “As I’ve said consistently, Russia attempted to interfere in the last election and continues to engage in malign influence operations … and this needs to be taken extremely seriously.”

Coats said that current Russian efforts are not as “robust” as during the 2016 election cycle, but that Moscow has taken on “numerous” other strategies to influence public opinion -- through media, social media, bots and proxies -- “with the intent to ... drive a wedge and undermine our democratic values.”

Earlier this week, Facebook uncovered “sophisticated” efforts, possibly linked to Russia, to influence American politics in advance of the midterms. The social media giant said in a blog post that it removed 32 accounts from Facebook and Instagram because they were involved in “coordinated” political behavior and appeared to be fake.

Facebook did not say the effort was explicitly aimed at the midterm elections, but said the timing could be a sign of an attempt.

Other methods of cyber influence were revealed last week, when a report surfaced that Russian hackers allegedly targeted staff employed by Sen. Claire McCaskill, D-Mo., using a sophisticated password-stealing scheme. The hack was apparently unsuccessful, but an example of Russian meddling practices.

Other U.S. officials and lawmakers have been targeted by foreign actors. Coats told reporters Wednesday that the intelligence community processed that type of information through House or Senate leadership, and then disseminated the findings down to the individual lawmakers targeted. Coats, though, said he could not release any other names.

"The Russians are looking for every opportunity, regardless of party, whether it applies to the election, to continue pervasive efforts to undermine our fundamental values," Coats said.

And last month, Maria Butina, a Russian national accused of working as a covert spy while in the U.S. on a student visa, was arrested. Butina is accused of attempting to infiltrate multiple organizations in the U.S. at the direction of an unnamed senior Kremlin official. She has pleaded not guilty to the allegations, but remains in jail as prosecutors argued she could be a flight risk.

Fox News' Christopher Carbone, Gregg Re and The Associated Press contributed to this report.