In televised remarks from the East Room of the White House, the president praised what he called Kavanaugh's "impeccable credentials, unsurpassed qualifications and a proven commitment to equal justice under the law."

"There is no one in America more qualified for this position, and no one more deserving," Trump said.

Kavanaugh had been considered a front-runner ever since Kennedy's June 27 retirement announcement. Trump conducted a swift and decisive vetting process, eager to push for confirmation of his second Supreme Court pick in less than two years.

Though the president said Monday his nominee deserves "robust bipartisan support," many Democratic lawmakers had vowed even before the announcement to oppose Trump's choice. In his own remarks, Kavanaugh looked ahead to what's expected to be a bruising confirmation fight: "I will tell each senator that I revere the Constitution. I believe that an independent judiciary is the crown jewel of our constitutional republic.

"If confirmed by the Senate, I will keep an open mind in every case, and I will always strive to preserve the Constitution of the United States and the American rule of law."

He said a judge "must interpret the law, not make the law."

A clue to Kavanaugh’s nomination emerged hours before the announcement when the D.C. Circuit Court of Appeals issued a written opinion in which the judge sided with the majority. The D.C. court does not typically issue opinions on Mondays except in response to emergency petitions, suggesting the case had to be disposed of before Kavanaugh was nominated for the high court. 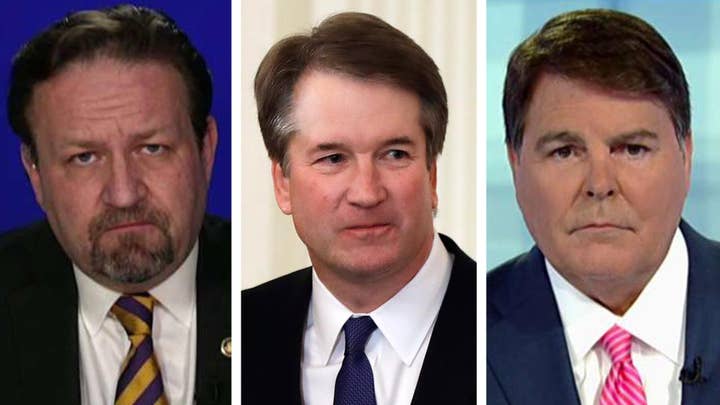 In the hours leading up to Trump's announcement, crowds of pro-choice and pro-life protesters gathered outside the Supreme Court building. Some chanted "Kavanaugh has got to go" as news of the nomination spread through the crowd. Sen. Kirsten Gillibrand, D-N.Y., spoke to the crowd and led an anti-Kavanaugh chant, though her own words were drowned out by protesters.

The protests were a snapshot of the intense battle to come, on Capitol Hill and in midterm races across the country where the nomination will factor heavily.

Kavanaugh has a deep judicial record, having written about 300 opinions.

A former law clerk to Kennedy in 1993, he was elevated to the powerful federal appeals court in the District of Columbia by President George W. Bush, under whom he had served as a White House lawyer and staff secretary. Kavanaugh, 53, also won the confidence of key players in the Bush circle such as strategist Karl Rove.

Kavanaugh was nominated to the D.C. Circuit Court of Appeals by his former boss, George W. Bush, in 2006. (Copyright 2018 The Associated Press. All rights reserved.)

This, however, had risked being something of a double-edged sword for Kavanaugh in the Trump era, raising concerns among some Trump supporters that he was too much of a D.C. insider and too closely associated with the Bush circle.

In a statement, Bush said Trump had made an "outstanding decision" in nominating Kavanaugh.

"Brett is a brilliant jurist who has faithfully applied the Constitution and laws throughout his 12 years on the D.C. Circuit. He is a fine husband, father, and friend – and a man of the highest integrity. He will make a superb Justice of the Supreme Court of the United States."

Trump may have been swayed in part because of Kavanaugh’s record of being a reliable conservative on the court – and reining in dozens of administrative decisions of the Obama White House. There are some question marks for conservatives, particularly an ObamaCare ruling years ago.

In a 2011 case, Kavanaugh acknowledged in his dissent that the Affordable Care Act’s “individual mandate provision” could fit “comfortably within Congress’ Taxing Clause power.” His detractors say that language helped provide the road map for the Supreme Court to uphold the mandate a year later.

However, supporters of Kavanaugh have pushed back against that argument. Justin Walker, a former Kavanaugh clerk, argued that the judge’s “hypothetical discussion” about the Taxing Clause has been misinterpreted and is actually “a road map to the conclusion reached by the dissenters—that the individual mandate is unconstitutional under the Taxing Clause.”

It’s also unclear how Kavanaugh would rule on abortion, as he has never directly confronted the issue as a judge. Last year, Kavanaugh dissented from a decision allowing an illegal immigrant to receive an abortion, but pro-life conservatives have criticized him for not going far enough. Specifically, they have expressed concern about language where Kavanaugh wrote “the unlawful immigrant minor is assumed to have a right under precedent to an abortion.”

Protesters gathered outside the Supreme Court in Washington before and after Trump's pick was announced.

The administration announced earlier Monday that former Sen. Jon Kyl of Arizona would guide the nominee through the Senate confirmation process. Before retiring in 2013, Kyl was a member of the Senate Judiciary Committee, which will be the first to consider the nomination. The White House hopes Kyl's close ties to Senate Republicans will help smooth the path for Kavanaugh.

In addition, the conservative group Judicial Crisis Network will launch a $1.4 million ad buy in support of Kavanaugh, running advertisements in Alabama, Indiana, North Dakota, and West Virginia – states with Democratic senators on the fence about supporting Trump’s nominee.

Senate Democratic Leader Chuck Schumer vowed Monday to oppose Kavanaugh's nomination "with everything I have," saying that Trump had "has put reproductive rights and freedoms and health care protections for millions of Americans on the judicial chopping block."

"If Americans believe in a woman's right to make her own reproductive choices, and that health insurance companies shouldn't be able to charge people more based on pre-existing conditions, now is the time to fight," Schumer said. "Im calling on Americans from all walks of life to make their voices heard from now until the end of this battle."

Of the five, Donnelly, Heitkamp and Manchin voted to confirm Gorsuch last year -- and are up for re-election. Jones, who was elected to the Senate in a December 2017 special election after Gorsuch was confirmed, is not up for re-election until 2020. He told CNN on Sunday that he was “not an automatic, knee-jerk no” on any of the potential nominees.

Republican Sens. Susan Collins of Maine and Lisa Murkowski of Alaska, seen as most likely among Republicans to consider voting against a Trump nomination, also declined invitations to attend.