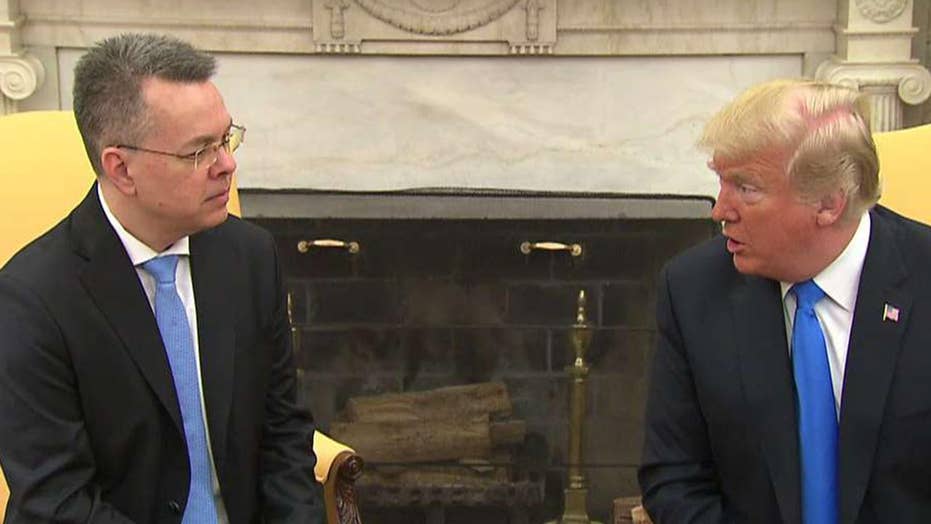 Freed American pastor Andrew Brunson met and prayed with President Trump in the Oval Office Saturday, thanking him for having "really fought for us" -- a day after his release from house arrest in Turkey.

Brunson, from North Carolina, arrived in the U.S. earlier Saturday after stopping in Germany on Friday. Brunson was imprisoned in October 2016 due to his alleged ties to an outlawed group as part of a crackdown on a failed coup in Turkey against President Recep Erdogan’s government. A Turkish judge on Friday ordered him freed from house arrest on Friday after sentencing him to time served on terror and treason charges.

Brunson thanked Trump in the Oval Office, saying "you really fought for us, unusually so, from the time you took office." He also thanked members of Congress on both sides of the aisle who had worked for his release.

"We're so grateful to so many people in Congress who stood with us, who prayed for us, who fought for us," he said.

In a dramatic moment, Brunson knelt down and prayed with the President -- asking God for "supernatural wisdom to accomplish all the plans you have for this country and for him."

In his remarks, Trump said it was a "great honor" to have Brunson in the White House and thanked a number of lawmakers and members of the Cabinet for their assistance in securing Bunson's release.

"If ever there was a bipartisan effort, this was it," he said. A number of senators, as well as Secretary of State Mike Pompeo and National Security Advisor John Bolton, were in attendance in the Oval Office. Trump also appeared to take something of a swipe at the previous administration when he said: "We do not pay ransom in this country, at least any longer."

Brunson said he and his wife looked forward to spending time with children and praying to see what God wants next from him.

Trump, who had thanked Turkish President Erdogan "for his help" earlier in the day, expressed hope that Brunson's release would mark the start of better relations between the two countries. Trump said on Twitter that while there was “great appreciation” and a hope of good relations between the U.S. and Turkey, but there was “no deal” made for Brunson’s return.

“There was NO DEAL made with Turkey for the release and return of Pastor Andrew Brunson. I don’t make deals for hostages,” he tweeted. “There was, however, great appreciation on behalf of the United States, which will lead to good, perhaps great, relations between the United States & Turkey!”

The Trump administration advocated persistently for Brunson's release, leading to an intense economic showdown between the two NATO allies. In August, the U.S. slapped sanctions on an array of Turkish officials and on some goods, sending Turkish currency into freefall. Brunson's release still leaves Turkey frustrated by the Trump administration's refusal to extradite Fethullah Gulen, a Pennsylvania-based Muslim cleric accused by Turkey of engineering the failed coup.

Brunson was accused of committing crimes on behalf of Gulen and Kurdish militants who have been fighting the Turkish state for decades. He faced up to 35 years in jail if convicted of all the charges against him.