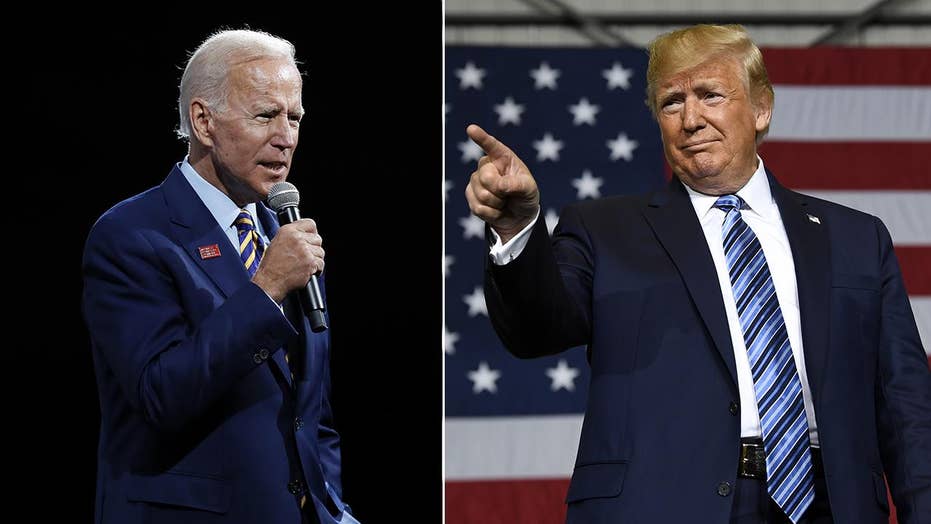 MANCHESTER, N.H. – Donald Trump is returning to where it all started.

Trump’s crushing victory over his GOP rivals in New Hampshire’s first-in-the-nation presidential primary in February of 2016 launched him toward winning the Republican presidential nomination and eventually the White House.

On Thursday evening, the president returns to the crucial general election battleground state, as he holds his first campaign rally in New Hampshire since the eve of the 2016 election.

“We’re going to have a tremendous time,” Trump said in an interview on one of the state’s top news-talk radio programs hours before arriving in the state. “You remember in the primaries when I won New Hampshire, that was really something special.”

But his rally is much more than just a nostalgic trip down memory lane.

The Southern New Hampshire University Arena in downtown Manchester, NH fills up with Donald Trump supporters ahead of the president's rally, on Thursday August 15, 2019

With concerns that Trump may not be able to keep crucial Rust Belt states like Michigan, Wisconsin and Pennsylvania red, the president and his campaign are aiming to try and flip several swing states – New Hampshire, Minnesota, Colorado, Nevada and New Mexico – that Democratic nominee Hillary Clinton carried in the 2016 election.

Trump narrowly lost New Hampshire to Clinton in the last presidential election by less than 3,000 votes. And this time around, he’s looking to take the state.

The Trump campaign is expecting a sold-out event at the arena in downtown Manchester where the rally will be held, but there will also be counter-demonstrations. The state Democratic Party and progressive groups are planning a protest across the street from the Trump event.

Anti-Donald Trump protests outside of the Southern New Hampshire University Arena in Manchester, NH, ahead of the president's rally, on Thursday August 15, 2019

Some of the New Hampshire campaigns of the Democratic presidential candidates are also countering the president. Among them are staff, volunteers and supporters of former Vice President Joe Biden, who will hold a “response rally” called “Stand Up to Hate” at a restaurant a few blocks from the arena.

Trump’s rally is his first since the recent mass shootings in El Paso, Texas and Dayton, Ohio that left at least 32 people dead. Democrats -- and even some Republicans -- have sought to blame the president’s divisive rhetoric on race and immigration that he uses on Twitter and at campaign rallies as a contributing factor in the El Paso massacre.

On Thursday morning, Trump dismissed such criticism, saying in the radio interview that “it’s become a soundbite. That’s what they want to do.”

Previewing his event, the president said on "New Hampshire Today with Jack Heath" that ”we’ll be talking about the economy. The economy is phenomenal right now.”

That’s especially the case in New Hampshire, which has one of the lowest state unemployment rates in the country.

Corey Lewandowski -- who managed Trump’s presidential campaign from its start in 2015 through the 2016 primaries and who remains a close outside adviser to the president – pointed to the economy as a key reason why “I think he wins New Hampshire” this time around.

The D.C. consultant and lobbyist who’s long lived in New Hampshire is considering a run for the Senate in the state and will join the president at Thursday’s rally. He told Fox News “the economy’s going to be different this time around. It’s much stronger than it was three and a half years ago.”

But while the state’s unemployment level was at just 2.5 percent in June, wage growth was significantly below national gains, according to the Bureau of Labor Statistics.

“He’s been too busy tweeting to get anything done. He’s broken promise after promise. On all accounts, the Trump presidency is a failure. Under his watch, Washington has been taken over by his rich and powerful friends and their lobbyists,” Buckley told reporters.

Trump’s approval rating remains underwater in the state. A University of New Hampshire poll released earlier this week indicated the president had 42 percent approval and 53 percent disapproval in the state. More importantly, he stood at just 40 percent approval among independent or undeclared voters, who make up around two-fifths of the state’s electorate.

Buckley emphasized that “it’s very important that we send a message – especially to the national media that’s coming into the state – that the people of New Hampshire do not support Donald Trump. There’s not a single poll that doesn’t show him double-digits underwater.”

Buckley and other leading Democrats also argue that the president has done little to remedy the health care crisis and combat the state’s acute opioid addiction epidemic, two top issues in New Hampshire.

While the president remains divisive and polarizing in New Hampshire, he has consolidated the state’s GOP base. The new chairman of the New Hampshire Republican Party is one of Trump’s co-chairs in the state from his 2016 campaign.

The UNH survey indicated Trump with an 82 percent approval rating among Granite State Republicans. And his sole primary challenger – former Massachusetts Gov. Bill Weld – remains in the single digits in recent polling, despite making near-weekly stops in New Hampshire the past six months.

“His consolidation of support in the Republican Party is much stronger than it was,” Lewandowski said.