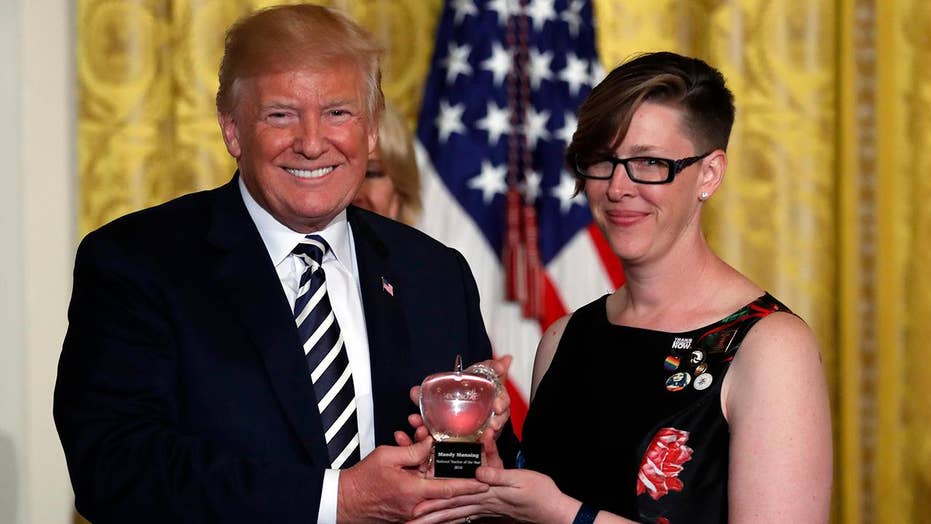 President Trump makes remarks at the National Teacher of the Year event.

A Washington state educator who leads a classroom for teenage refugees was awarded the National Teacher of the Year by President Donald Trump at The White House Wednesday.

Mandy Manning teaches English to new refugee and immigrant students at the Newcomer Center at Joel E. Ferris High School in Spokane. Manning previously worked as a teacher in the Peace Corps in Armenia, and she also taught in Japan and in other parts of the U.S., according to The Hill.

At the Newcomer Center where Manning teaches, students spend five hours a day working to set up a base of academic knowledge so that the teens ultimately can join their peers in general education classes. Manning also helps them adjust to American culture — from navigating the cafeteria and reading body language to understanding classroom etiquette, like taking turns when speaking.

Manning’s students come from all over the world, many escaping chaotic, conflict-torn homelands across the Middle East, Africa, Asia and the Americas.

“Teachers like Mandy play a vital role in the well-being of our children, the strength of our communities and the success of our nation,” Trump said during a White House ceremony held to honor her and other winners. “The job of a teacher is not only to instruct the next generation of workers but the next generations of citizens to teach our children to care for others, to think for themselves, to love their country, to be proud of our history and to be true pillars of their families and their communities.”

President Donald Trump presenting the National Teacher of the Year award to Mandy Manning, a teacher at Newcomer Center at Joel E. Ferris High School in Spokane, Wash., in the East Room of the White House in Washington on Wednesday. (AP Photo/Carolyn Kaster)

Manning’s selection was announced Friday by the Council of Chief State School Officers.

“Mandy is a strong educator who believes in a great public education for every student and has a unique perspective on meeting the needs of some of our nation’s most vulnerable children,” the state superintendents’ group said in a statement, Q13 Fox reported.

The National Teacher of the Year Program began in 1952 and describes itself as the “oldest, most prestigious national honors program that focuses public attention on excellence in teaching.”

Every president since Harry Truman has honored its winners in a White House ceremony.