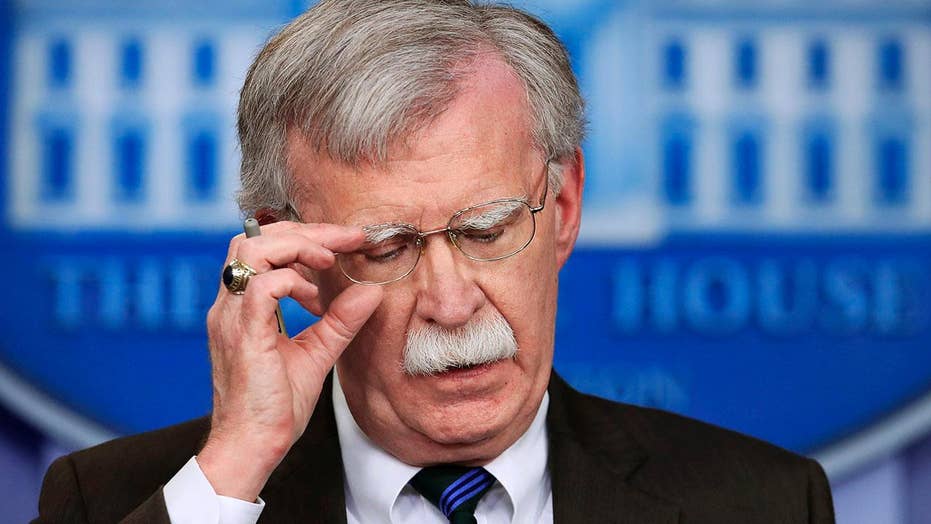 President Trump announced Tuesday that he has fired National Security Adviser John Bolton, saying he “disagreed strongly” with his suggestions on a range of issues.

“I informed John Bolton last night that his services are no longer needed at the White House,” Trump tweeted.

“I disagreed strongly with many of his suggestions, as did others in the Administration, and therefore I asked John for his resignation, which was given to me this morning,” he continued. “I thank John very much for his service. I will be naming a new National Security Advisor next week.”

While Bolton swiftly challenged Trump's version of events -- saying he offered to resign -- the two have had well-known disagreements on a range of hot-button national security issues, perhaps most significantly on plans for a troop drawdown in Afghanistan.

BOLTON: A 'LOT AT STAKE' IN VENEZUELA

Bolton's removal comes after the hawkish adviser was reportedly sidelined from high-level discussions about military involvement in Afghanistan, after opposing diplomatic efforts in the region.

“Simply put, many of Bolton’s policy priorities did not align with POTUS,” a White House official told Fox News on Tuesday.

While Trump announced a 4,000-troop increase in 2017 as part of an effort to break the stalemate in the country, he has been moving toward agreeing to a phased withdrawal of troops. Some 14,000 U.S. troops have remained in Afghanistan, advising and assisting Afghan forces and conducting counterterrorism operations.

Bolton fired back Tuesday, tweeting moments after the president's announcement that he offered his resignation on Monday evening, saying it was not immediately accepted by Trump.

Bolton also told Fox News on Tuesday that he and the president were discussing Afghanistan on Monday evening, when he offered to resign.

"I offered to resign last night," he told Fox News in a text message. "There was no request for a resignation."

The letter, obtained by Fox News, was dated Sept. 10, 2019, and stated: "Dear Mr, President: I hereby resign, effective immediately, as Assistant to the President for National Security Affairs. Thank you for having afforded me this opportunity to serve our country."

Bolton, who previously served as a Fox News contributor, worked in the administrations of former Presidents Ronald Reagan, George H.W. Bush and George W. Bush and served as a Bush's lawyer during the 2000 Florida recount. Bolton also served as a U.S. permanent representative to the United Nations from 2005 to 2006, and as an undersecretary of state for arms control and international security from 2001 to 2005.

One source told Fox News that many in the White House learned of Bolton's firing from the president's tweet Tuesday.

Prior to the president's tweets Tuesday morning, Bolton had been expected to join a national security briefing with Secretary of State Mike Pompeo and Treasury Secretary Steven Mnuchin.

At that briefing, meant to discuss a new executive order strengthening the government's ability to sanction those with terror ties, Pompeo and Mnuchin defended the president.

“The president is entitled to the staff he wants,” Pompeo said.

Pompeo went on to say there were “many times” he and Bolton disagreed but added “that’s true of a lot of people I interacted with.”

Asked if they had been blindsided by Bolton’s departure, Pompeo replied: “I am never surprised.”

Mnuchin reiterated that, while Bolton may be gone, the administration intends to keep going with its “maximum pressure” campaign against Iran. However, he also stated that Trump is prepared to meet with Iranian President Hassan Rouhani at this month’s U.N. General Assembly without preconditions.