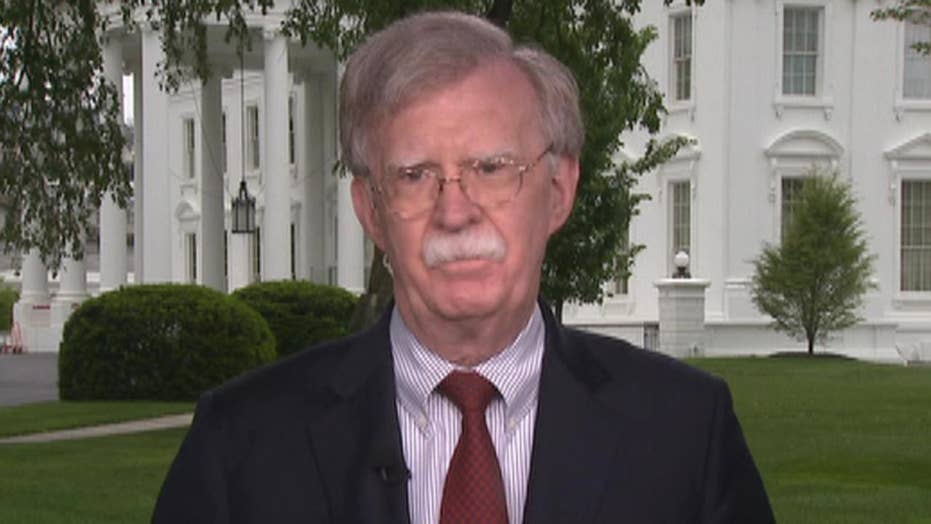 John Bolton on violent clashes in Venezuela: ‘There’s a lot at stake’ for ‘the hemisphere as a whole’

As the unrest&nbsp;continued in Venezuela on Wednesday, National Security Adviser&nbsp;John Bolton&nbsp;said on “Fox &amp; Friends,” “There’s a lot at stake here for the&nbsp;people of Venezuela but for the&nbsp;hemisphere as a whole.”

As the unrest continued in Venezuela on Wednesday, National Security Adviser John Bolton said that “there’s a lot at stake here for the people of Venezuela but for the hemisphere as a whole.”

Opposition leader Juan Guaidó has called for a new round of mass protests on Wednesday after a day of violent uprising in Venezuela against President Nicolas Maduro.

After being absent for most of the day, Maduro took to the airwaves to proclaim that Guaidó's rebellion had been defeated. However, that did not stop Guaidó, who is recognized by the U.S. and more than 50 other nations as Venezuela's rightful president, from calling for more protests.

“Honestly, our judgment is that the overwhelming number of military service members in Venezuela support Juan Guaidó and the opposition,” Bolton said on “Fox & Friends” Wednesday.

He added: “It’s just a matter of time before they come over to the opposition and some of that could happen today.”

Bolton went on to say that how Guaidó and the actions are being referenced in a serious problem.

"That's really a major part of the problem here. People incorrectly refer to what Juan Guaidó is doing as a coup. He’s the legitimate president. He’s trying to take control of the government,” Bolton said.

“The coup here has been by the Cubans and the Russians who have sort of grafted themselves on to Venezuela. I think they're running it in some sense more than Maduro is.”

Opposition forces hope that fed-up Venezuelans will be so angered by broadcast images of armored vehicles plowing into protesters that they will continue to riot in the streets.

“The main point to make here is that we're not going to see the Russians take over a country in the western hemisphere, not directly, not through their surrogates the Cubans and that’s why President Trump yesterday suggested that if the Cubans don't get off the body politic in Venezuela they’re going to face significant consequences on their own,” Bolton said.

He said the United States “already started” exerting pressure on Cuba to get their hands out of Venezuela and listed several examples: “We’ve restricted travel to Cuba, we've done a number of steps to stop the transfer of oil from Venezuela to Cuba at subsidized prices. That will put an enormous squeeze on the Cuban economy. I think the point about sending 20 to 25,000 Cuban security forces back to Cuba will have a big impact.”

“In parts of the hemisphere they call Venezuela Cuba-zuela, that’s how much influence the Cubans have.”

He then referenced President Trump’s tweets on a possible embargo if the Cubans don’t stop the violence.

Trump tweeted on Tuesday night, “If Cuban Troops and Militia do not immediately CEASE military and other operations for the purpose of causing death and destruction to the Constitution of Venezuela, a full and complete....

"....embargo, together with highest-level sanctions, will be placed on the island of Cuba. Hopefully, all Cuban soldiers will promptly and peacefully return to their island!”

Bolton said, “There’s a lot at stake here for the people of Venezuela but for the hemisphere as a whole, which is why the organization of American states, the Lima group (a coalition that includes more than a dozen Latin American countries) and others have been very clear, they support Juan Guaidó and the opposition. This is not made in Washington by any stretch of the imagination.”