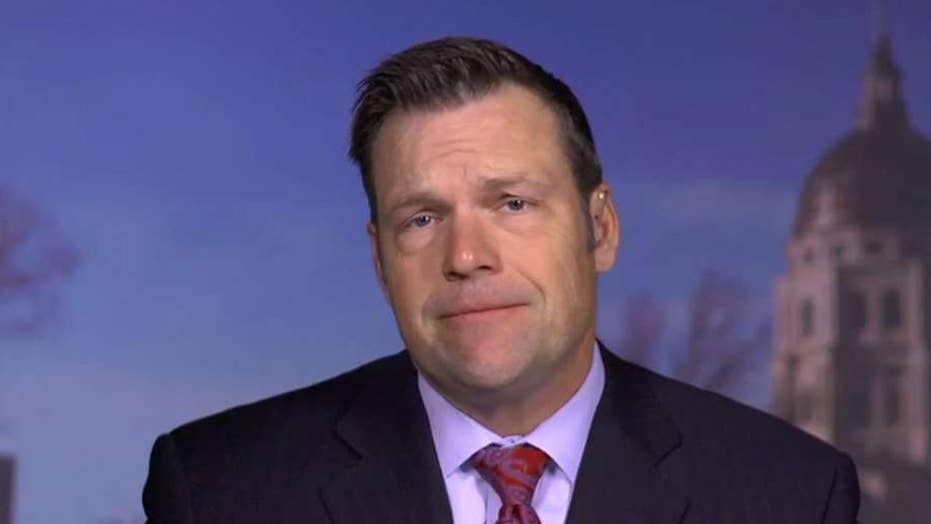 The Trump administration is facing a fresh wave of federal lawsuits in the wake of its controversial executive order on immigration – with challenges emerging so far from civil rights groups, Muslims barred from entering the U.S., and a state attorney general.

Washington Attorney General Bob Ferguson on Monday afternoon became the first state official to sue the president over the issue.

“We are a country based on the rule of law,” Ferguson, a Democrat, said at a news conference in Seattle. “In a courtroom, it is not the loudest voice that prevails. It’s the Constitution.”

Ferguson was among 16 state attorneys general who released a statement Sunday calling the president’s immigration order “un-American and unlawful.”

His lawsuit, along with several others, signal a protracted legal fight ahead over Friday's executive order, by far the most controversial measure President Trump has signed since taking office. As the White House voices confidence the measure will be upheld, critics are citing anti-discrimination laws and the Constitution in challenging the order.

The order signed Friday specifically suspends the refugee program for 120 days and suspends entry to the U.S. for travelers from seven terror hotspots (which also are Muslim-majority countries) for 90 days.

The rocky rollout of Trump’s order sparked confusion and chaos at the nation’s airports as customs agents struggled over how to interpret it. It also triggered protests coast to coast.

Since Friday, four federal judges have ordered various holds relating to travelers affected over the weekend. But judges have not yet ruled on the broader aspects of the order.

Trump and his team have adamantly defended the plan as critical for national security.

“The seven countries named in the Executive Order are the same countries previously identified by the Obama administration as sources of terror,” Trump said. “To be clear, this is not a Muslim ban, as the media is falsely reporting.”

Former President Barack Obama pushed back Monday on any comparison between their immigration policies as well as the “notion of discriminating against individuals because of their faith or religion."

He added, “This is a national security issue.”

But Nihad Awad, executive director of the Council on American-Islamic Relations, argued that the Trump administration has violated the law.

CAIR filed a lawsuit Monday in Virginia on behalf of 20 Muslims that claims Trump’s executive order violates due process and equal protection under the law.

Federal law gives Trump sweeping authority over immigration. He is legally allowed, under the Immigration and Nationality Act, to suspend entry for people or classes of people he believes would be harmful to the nation.

A 1965 update to the law says people should not be subjected to preferential treatment or discrimination based on their “race, sex, nationality, place of birth or place of residence.”

The White House argues that the executive order is not a Muslim ban and that it prohibits all people from specific countries that have an established terrorist network.

However, in an interview with the Christian Broadcasting Network on Friday, Trump indicated he would give preferential treatment to persecuted Christians from Syria and stated that Muslims were given priority under the previous administration.

“If you were a Muslim you could come in, but if you were a Christian, it was almost impossible,” Trump said. He added, “And I thought it was very, very unfair. So we are going to help them.”

The United States admitted 38,901 Muslim refugees in 2016 – nearly the same number of Christians, 37,521, were also admitted, according to a report by the nonpartisan Pew Research Center.

The CBN interview coupled with an admission from Trump adviser Rudy Giuliani on Fox News that Trump contacted him and others about how to legally craft a ban could be used as ammunition by immigration and civil liberty activists to prove the administration’s intent.

The American Civil Liberties Union, which has raised at least $24 million since Saturday morning and added 150,000 new members, also filed a class-action lawsuit on behalf of two Iraqis who were temporarily detained at John F. Kennedy Airport in New York on Saturday. The men were on their way to the U.S. on immigrant visas.

One of them, Hameed Khalid Darweesh, worked as an electrical engineer and contractor for the U.S. government from 2003-2010. He also worked as an interpreter during the invasion of Iraq. Brandon Friedman, who commanded the platoon during the invasion, tweeted Sunday that Darweesh “spent years keeping U.S. soldiers alive in combat in Iraq.”

The second man detained, Haider Sameer Abdulkhaleq Alshawi, had been granted a visa to join his wife and 7-year-old son who are legal permanent residents in Houston.

“President Trump's war on equality is already taking a terrible human toll,” Omar Jadwat, director of the ACLU’s Immigrants’ Rights Project, said in a written statement. “This ban cannot be allowed to continue.”

Ruthann Robson, professor of law at City University of New York School of Law, told The Washington Post that Trump’s order could be thrown out for violating the equal protection clause of the Constitution. She added that the courts have come down hard on governmental distinctions based on race or ancestry.