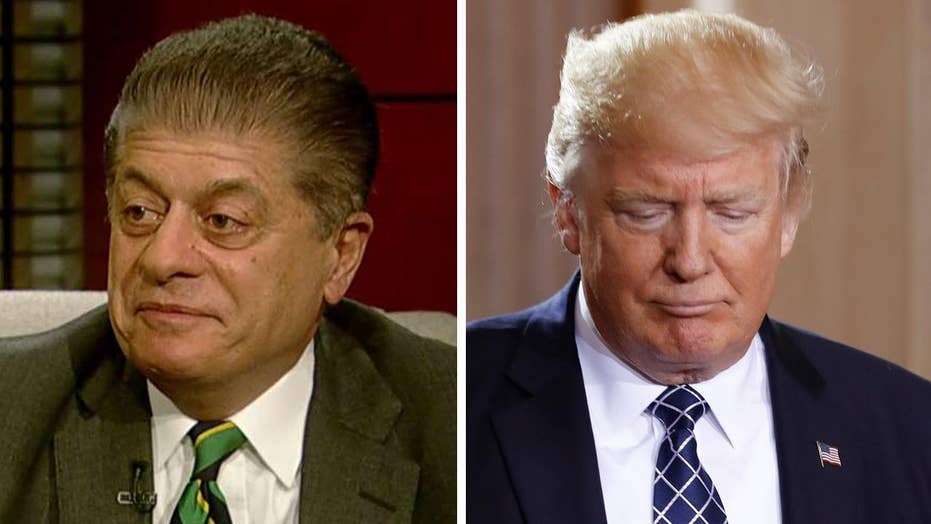 Judge Napolitano on if Trump can turn around 9th Circuit

President Trump upped his battle with the federal appeals court potentially standing in the way of his agenda, saying Wednesday he “absolutely” has considered proposals to break up the San Francisco-based 9th Circuit.

Trump made the comments in an interview with The Washington Examiner. His complaints came on the heels of the appeals court earlier this year helping block his controversial “travel ban” and a federal District Court judge in northern California on Tuesday blocking his bid to cut off sanctuary city funding.

That judge, William Orrick, is not on the 9th Circuit bench, but the case could hit that court if appealed.

Trump accused his opponents of “judge shopping,” and told the Examiner they “immediately run to the 9th Circuit.”

And he gave a nod to congressional proposals to split up the appeals court into smaller parts.

"There are many people that want to break up the 9th Circuit. It's outrageous," Trump said.

Republicans have long complained that the 9th Circuit is not only liberal-leaning but far too big – covering a sprawling amount of territory.

GOP Sens. Jeff Flake and John McCain of Arizona introduced legislation earlier this year to carve six states out of the court circuit and create a brand new 12th Circuit.

If they succeed, only California, Oregon, Hawaii and two island districts would remain in the 9th.

Congress created the court in 1891. At the time, the area was sparsely inhabited – only 4 percent of the U.S. population lived in the area compared to today’s 20 percent.

In 1998, Congress appointed a commission to re-examine the federal appeals courts’ structure. The commission ultimately recommended against splitting the 9th Circuit.

But carving up the large circuit isn’t out of the realm of possibility. In 1929, Congress split the 8th Circuit to accommodate a population boom and increased caseloads.

The Trump administration, meanwhile, is preparing to fight the latest sanctuary city ruling.

“The Department of Justice cannot accept such a result, and as the president has made clear, we will continue to litigate this case to vindicate the rule of law,” Attorney General Jeff Sessions said in a statement, citing the need to deport criminal illegal immigrants. “This is the Trump era. Progress is being made daily, and it will continue. This will be the administration that fully enforces our nation’s immigration laws.”

Orrick’s ruling to halt Trump’s order on sanctuary cities criticized the plan as too broad, saying it potentially threatens to cut off a wide range of federal grants to targeted cities.

"And if there was doubt about the scope of the order, the president and attorney general have erased it with their public comments," he wrote.