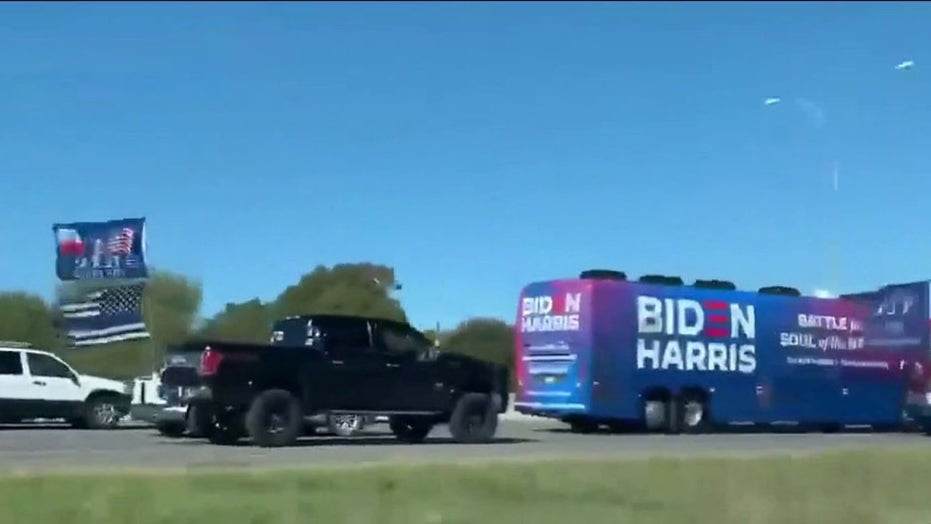 President Donald Trump is defending road rallies across the country, particularly the “Trump Train” in Texas that surrounded a Joe Biden campaign bus.

Trump tweeted on Monday about an FBI investigation into the Friday incident in which several trucks formed a so-called “Trump Train” around the bus as it traveled from San Antonio to Austin.

“This story is FALSE,” the president tweeted. “They did nothing wrong. But the ANTIFA Anarchists, Rioters and Looters, who have caused so much harm and destruction in Democrat run cities, are being seriously looked at!”

Trump’s tweet was a response to CNN anchor Ana Cabrera’s tweet in which she said that the FBI was investigating alleged harassment by the motorists.

Trump’s comments reiterate earlier comments the president made on Sunday, when he said that “In my opinion, these patriots did nothing wrong. Instead, the FBI & Justice should be investigating the terrorists, anarchists, and agitators of ANTIFA, who run around burning down our Democrat run cities and hurting our people!”

Trump had originally commented on the event when he tweeted a video of the incident, saying “I LOVE TEXAS!”

The incident led to the Biden/Harris campaign cancelling two events planned to be held in San Marcos and Austin. Neither Biden nor his running mate, Kamala Harris, were aboard the bus, which was not part of Harris’ separate visit to Texas that day.

The last few weeks have seen Trump supporters take to the road in an effort to show their support in what appears to be a tightly contested election. Reports indicate that even historically ruby red Texas may be in play for Democratic candidate Joe Biden.

The rallies blocked traffic on the two busy roadways for hours. Trump supporters stood on the bridge and parkway with flags raised as they chanted their support for the president.

New York has seen a number of car rallies throughout October, with one in New York City before the “Jews for Trump” rally earlier last week, as well as a number of “MAGA-gras” caravans organized by Loud Majority Long Island, which has claimed to have thousands of trucks and cars in its caravans.

“We’ve been the silent majority for a long time, and we decided that had to change,” Loud Majority leader and event organizer Shawn Farash of West Babylon said during one of the earlier rallies. “There are only so many times you can be falsely called a racist and a homophobe and misogynist and a fear monger."

The Trump truckers even appeared at a Biden stump stop in Minnesota on Friday night, honking throughout the candidate’s speech and appearing to get under the nominee’s skin.

“Dr. Fauci called for a mask mandate last week,” Biden said. “This isn’t a political statement like those ugly folks over there beeping the horns. This is a patriotic duty, for God’s sake.”