Democratic presidential nominee Joe Biden jabbed at a group of Trump supporters who honked their horns at a campaign stop in Minnesota, while he attempted to detail his plans to combat the coronavirus pandemic on Friday night.

Biden spoke over the noise throughout his speech at the drive-in rally in St. Paul. The former vice president ripped the Trump administration’s handling for the pandemic and appeared to grow irritated when the horn-honking interrupted his explanation for supporting a nationwide mask mandate.

“Dr. Fauci called for a mask mandate last week,” Biden said. “This isn’t a political statement like those ugly folks over there beeping the horns. This is a patriotic duty, for God’s sake.” 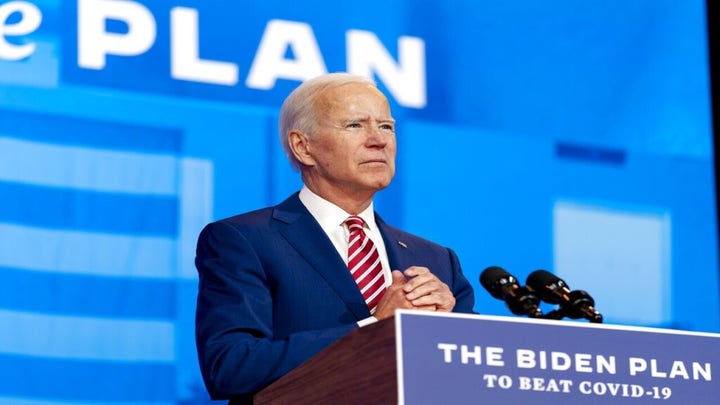 Biden argued that Trump has “simply given up” on containing the virus. He cited a surge in COVID-19 cases and a mounting death toll in Minnesota and other states.

The Democratic nominee said he would focus on “bringing the country together around testing, tracing and masking” to contain the pandemic.

Biden again referenced the horn-honking rally attendees while criticizing President Trump’s tax policies. If elected, Biden and his running mate Sen. Kamala Harris, D-Calif., have pledged to increase the corporate tax rate to 28% from 21% and raise taxes for people earning more than $400,000 a year.

“Why should a firefighter, an educator, even that guy blowing that horn, why should he pay?” Biden said. “Why should a nurse pay higher tax rates than the super-wealthy? Why should you pay more taxes than Donald Trump pays?”

The Trump and Biden campaigns stormed battleground states on Friday in a last-minute bid to rally support ahead of Election Day. Biden began the day with an event in Iowa and was slated to deliver another speech in Wisconsin later this evening.

An average of recent polls by Real Clear Politics showed Biden with 4.7 percentage point edge on Trump in Minnesota.