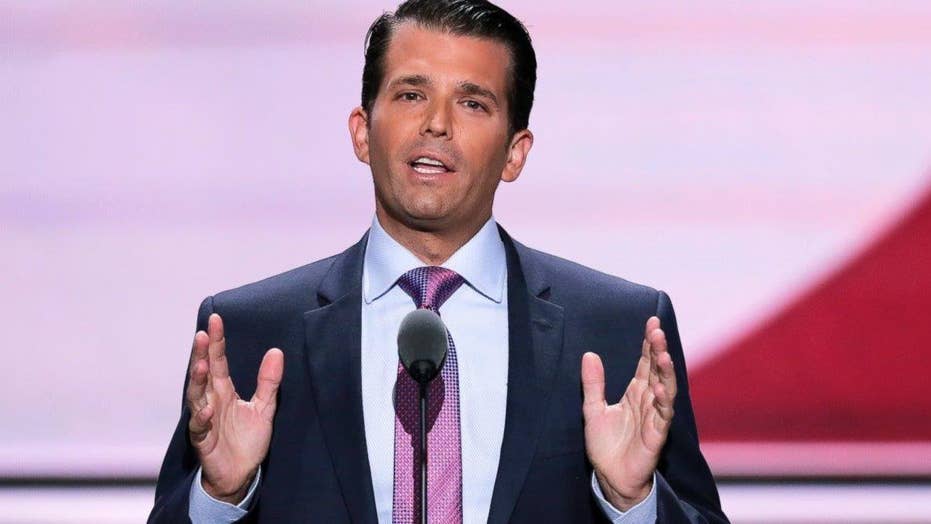 Did Donald Trump Jr. actually do anything wrong?

Press and pundits are split on Donald Trump Jr.'s meeting with a Russian attorney; reaction and analysis on 'The Five'

President Trump took to Twitter Monday morning defending his son anew over his controversial meeting with the Russian attorney who supposedly promised dirt on Hillary Clinton.

“Most politicians would have gone to a meeting like the one Don Jr. attended in order to get info on an opponent. That’s politics!” Trump tweeted Monday.

In recent days, the president has posted multiple Twitter defenses of his son, Donald Trump Jr., in the wake of new revelations surrounding his June 9, 2016 meeting at Trump Tower with Kremlin-linked attorney Natalia Veselnitskaya and other associates.

Trump Jr., his brother-in-law Jared Kushner and then-campaign chairman Paul Manafort were known to have attended the meeting with Veselnitskaya and music publicist Rob Goldstone, who brokered the get-together promising campaign dirt on Hillary Clinton.

But as of Friday, the number of people known to have attended the controversial meeting grew to eight, including Rinat Akhmetshin, a Russian-American lobbyist who confirmed his attendance, and two others.

The meeting lasted just 20 minutes, but caused a massive headache for the White House by reigniting claims that the Trump campaign colluded with Russia.

The president also tweeted on Sunday, slamming Clinton and questioning media coverage of the meeting.

“HillaryClinton can illegally get the questions to the Debate & delete 30,000 emails but my son Don is being scorned by the Fake News Media?” Trump tweeted, referring to CNN debate questions allegedly leaked by former CNN contributor and DNC official Donna Brazile.

Sunday’s tweet wasn’t the first directed at Clinton in an effort to shed light on a double standard in terms of media coverage of the former Democratic presidential nominee and his son.

Last week, Trump unloaded on Clinton and tweeted: “Why aren’t the same standards placed on the Democrats. Look what Hillary Clinton may have gotten away with. Disgraceful!”