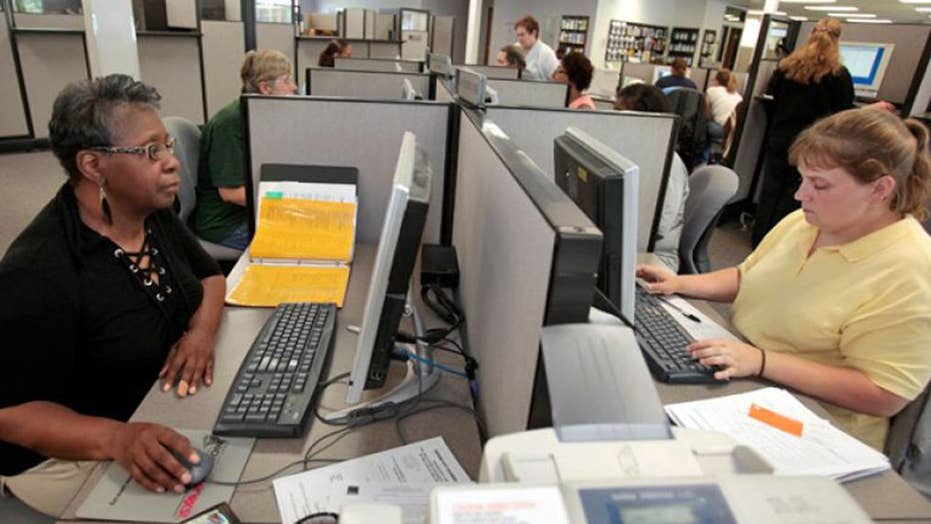 Unemployment rate dropped down to 3.8 percent.

A booming jobs report and signs the economy is expanding at a healthy pace despite global trade disputes proved too much for President Trump to keep quiet about Friday.

“Looking forward to seeing the employment numbers at 8:30 this morning,” the president tweeted he tweeted ahead of the official report.

Trump was foreshadowing a glowing unemployment report that showed the jobless rate dipped to an 18-year low of 3.8 percent. Although he and other key administration officials had been briefed a day earlier on the report, protocol calls for even the president to wait for the report's official release from the Labor Department.

Employers added 223,000 jobs, way up from the expected 188,000. Deep inside the report were other strong indicators that the nation's economy is on the upswing. Black and Hispanic unemployment, declining figures Trump regularly touts, plummeted to record lows. Average hourly pay rose 2.7 percent from a year earlier.

"President Trump’s policies are having a tremendous positive impact on the lives of Americans of all classes and backgrounds."

The unemployment and underemployment rates both ticked down, and reflect the continued tightening in the labor market," Sameer Samana, global quantitative and technical strategist with Wells Fargo Investment Institute told FOX Business.

The news comes even as Trump has announced new tariffs as high as 25 percent on imported steel and aluminum from the European Union, Canada and Mexico, triggering retaliation from U.S. allies and protests from American industry.

"The United States has been taken advantage of for many decades on trade," Trump said in a statement. "Those days are over. Earlier today, this message was conveyed to Prime Minister Justin Trudeau of Canada: The United State will agree to a fair deal, or there will be no deal at all."

Trump supporters say the president's economic plan and hard-bargaining with other countries is paying dividends for U.S. workers.

Kudlow said Trump's tweet didn't 'give anything away.' (Copyright 2018 The Associated Press. All rights reserved.)

"President Trump’s policies are having a tremendous positive impact on the lives of Americans of all classes and backgrounds," wrote Andy Puzder, the former CEO of CKE Restaurants who Trump nominated as U.S. labor secretary, in a recent column for FOX Business. "More people are working, there are more job openings, and fewer people are dependent on government.

While much of the business media wrung its hands over Trump's stealing the Labor Department's thunder, National Economic Council director Larry Kudlow said his boss didn't "give anything away."