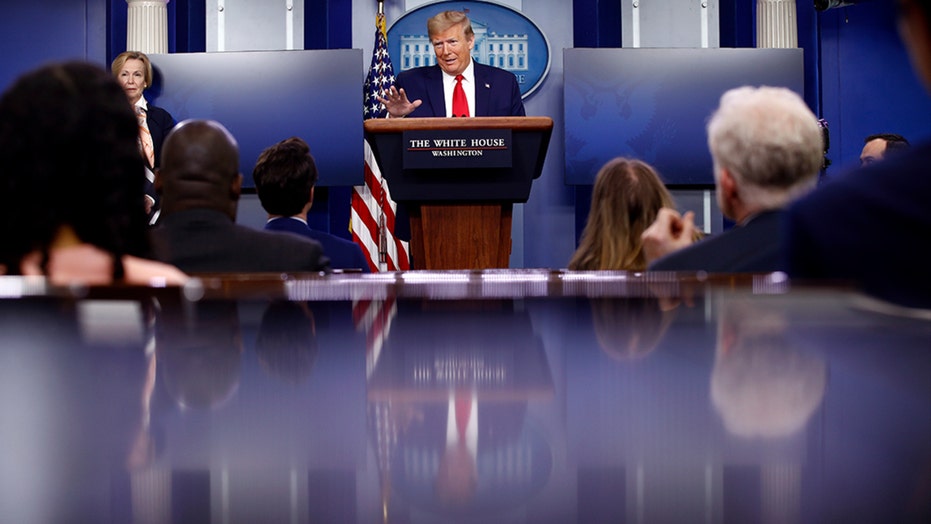 Trump on expansion of coronavirus testing in US

President Trump discusses the expansion of coronavirus testing in the U.S.

Speaking at the daily White House coronavirus briefing, the president unboxed a swab testing kit and touted the new testing technologies that could fight the pandemic, even as he cautioned that some states "don't know where they are."

Trump then read at length from a piece in The Wall Street Journal praising him for implementing new partnerships with the private sector, and "vivifying the American way in action, once reluctantly aroused."

"It was hard to get it aroused, and it is hard to get it aroused, but we got it aroused," Trump commented. He further indicated that he might cut funding for the National Institutes of Health (NIH), just two days after Fox News reported that the U.S. may have funded a Wuhan lab suspected in the coronavirus outbreak. Additonally, Fox News reported that the lead NIH coronavirus researcher had warned the virus might be a black "genocide" and reposted a tweet telling her superiors to check their "privilege."

Faced with criticisms that he had idled while the coronavirus spread, the president pointed out that Fox News' Bret Baier observed that Democrats' February 19 presidential debate had not mentioned coronavirus at all. Rhetoric on coronavirus from Democrats, Republicans, and the media has changed dramatically since January.

At the same time, Trump said Republicans were having "very good negotiations" with Democrats on expanding funding under the Paycheck Protection Program [PPP], and could have an agreement as soon as Monday. The stimulus legislation established a $350 billion fund for small businesses that was depleted last Thursday.

"We're looking to help hospitals, rural hospitals as part of the package," Trump said. "We could have an answer tomorrow."

Democrats have held up the passage of new funds for small businesses. House Speaker Nancy Pelosi, D-Calif., justified the delay on Sunday by saying she wanted more funding for testing and hospitals -- uncontroversial demands that even left-of-center commentators have pointed out that Republicans never opposed.

President Trump holdinng a swab that could be used in coronavirus testing, during the White House coronavirus briefing Sunday. (AP Photo/Patrick Semansky)

Earlier in the day, Trump spoke with Senate Majority Leader Mitch McConnell, R-Ky., and Treasury Secretary Steven Mnuchin. A source familiar with the call told Fox News that Mnuchin said the open items were limited to the testing portion of the aid package.

At the beginning of the call, McConnell and Mnuchin touted the additional funding for PPP and reiterated the additional state and local government funding and demands from Democrats regarding funding for the Supplemental Nutrition Assistance Program [SNAP], also known as food stamps, will not be in the final package.

During the briefing, Trump went on to tout what he called "bipartisan" efforts that have succeeded in blunting coronavirus deaths in the country -- as well as his Jan. 31 decision to block most travel from China, which Democrats, journalists, and some experts opposed at the time.

In a testy moment, CBS News reporter Weijia Jiang repeatedly interrupted the president and argued that he had implemented his Jan. 31 travel ban on China too late. Trump moved on from the question after the reporter admitted she didn't know how many coronavirus deaths had occurred in the U.S. at the time of the ban. (The answer is zero.)

Another reporter then asked about Trump supporters toting Nazi flags, in an apparent reference to a recently debunked viral photograph. Queried separately about the news that his former adviser Roger Stone may soon head to prison, Trump slammed what he called "human scum" at the FBI who repeatedly violated surveillance rules to monitor his campaign and pursue criminal charges.

"You people are so pathetic at CNN," Trump said, after reporter Jeremy Diamond pushed Trump on his previous praise for China's president amid the coronavirus outbreak, shortly after the U.S. inked a major trade deal with the country. "That's why your ratings are so bad. You're pathetic. Your ratings are terrible. You've got to get back to real news!"

On the whole, though, the briefing struck an optimistic tone.

"We are now the king of ventilators," Trump said, asserting that no American had been denied a ventilator who needed one. The U.S. has been sending a "pretty large quantity" of ventilators to other countries that have an urgent need for them, including Mexico, Trump said.

And, Seema Verma, the Centers for Medicare and Medicaid Services administrator, announced at the briefing that nursing homes must now report to patients and their families, as well as the Centers for Disease Control and Prevention [CDC], if each home had a case of coronavirus.

The president even introduced a video showing New York Gov. Andrew Cuomo, a Democrat, praising the Trump administration's response to the coronavirus, and the "extraordinary efforts and acts of mobilization" in which the "federal government stepped up and was a great partner."

"We needed help, and they were there," Cuomo said. "That is an undeniable fact." Cuomo also said that those who had died couldn't have been saved.

The daily coronavirus death toll in New York dropped again on Sunday, with Cuomo calling it a sign his state was "on the other side of the plateau," saying ongoing social-distancing practices were working to stem the spread of the virus. Cuomo said 507 people died on Saturday, down 33 from the previous day and by 271 since last Monday. Other indicators were going in the right direction, the governor said. Hospitalizations were down by more than 750, to 16,213.

Asked by a reporter what he would say to protesters, Trump remarked, "Some governors have gone too far. Some of the things that have happened are maybe not so appropriate. I think in the end, it's not going to matter, because we're going to open up our states."

He continued, "I'm with everybody."

Other governors, both Republicans and Democrats, have praised Trump in recent weeks over the virus response. Earlier this month, California Gov. Gavin Newsom, a Democrat, told CNN: "Let me just be candid with you. I'd be lying to you to say that [Trump] hasn't been responsive to our needs. He has. And so, as a sort of an offer of objectivity, I have to acknowledge that publicly."

At Sunday's briefing, Trump also drew larger lessons from the coronavirus pandemic, and recalled his winning 2016 presidential campaign platform. Over the weekend, former Vice President Joe Biden's presidential campaign released an advertisement accusing the president of taking a soft stance on China, although Biden and his advisers also had defended China.

"If one thing comes out of this more than anything else, it's that we should make product in the United States," Trump said. "I ran on that. I ran partially on that. ... I ran on China, and the way they were ripping us off."

"Globalists," Trump said, had conceived of the idea of yielding important U.S. supply chains to China, which the president asserted would lead to disaster in times of war or another catastrophe.

Trump fought back, "They'll own America, if Joe Biden got in there. Between China, Japan, Mexico and Canada -- they'd own America. You wouldn't have a country left if he got in."

Pressure to reopen the economy has increased amid skyrocketing jobless claims. Protesters worrying about their livelihoods and bucking infringements on their freedom have taken to the streets in some places. A few countries have been acting to ease restrictions, but most of the world has remained unified in insisting it's much too early to take more aggressive steps.

"To have an American president to encourage people to violate the law, I can’t remember any time during my time in America where we have seen such a thing," Inslee told ABC News' "This Week.'' He said it was "dangerous because it can inspire people to ignore things that actually can save their lives."

Trump supporters in several states have ignored social distancing and stay-at-home orders, gathering to demand that governors lift controls on public activity. The largest protest drew thousands to Lansing, Mich., last Wednesday, and others have featured hundreds in several states. The president has invoked their rallying cry, calling on multiple states to “LIBERATE.”

Shutdowns that began in China in late January and spread globally have disrupted economic, social, cultural and religious life and plunged the world into a deep economic slump unseen since the Great Depression. Tens of millions of workers have lost their jobs and millions more have worried they could be next.

With the arc of infection different in every nation and across U.S. states, proposals have differed for coping with the virus that has killed more than 165,000.

Restrictions have started to ease in some places, including Germany, which is still enforcing social distancing rules but on Monday intended to begin allowing some small stores, like those selling furniture and baby goods, to reopen.

Officials in Spain, which had some of Europe's strictest restrictions and a virus death toll only exceeded by the U.S. and Italy, said children will be allowed to leave their homes beginning April 27. Albania planned to let its mining and oil industries reopen Monday, along with hundreds of businesses including small retailers, food and fish factories, farmers and fishing boats.

The death toll in the U.S. climbed past 41,000 with more than 746,000 confirmed infections, while the global case count has passed 2.38 million, according to a tally by Johns Hopkins University of national health reports. The European Center for Disease Prevention and Control said the continent now has seen over 1 million confirmed cases and almost 100,000 deaths from the coronavirus.

Fox Business' Hillary Vaughn and The Associated Press contributed to this report.