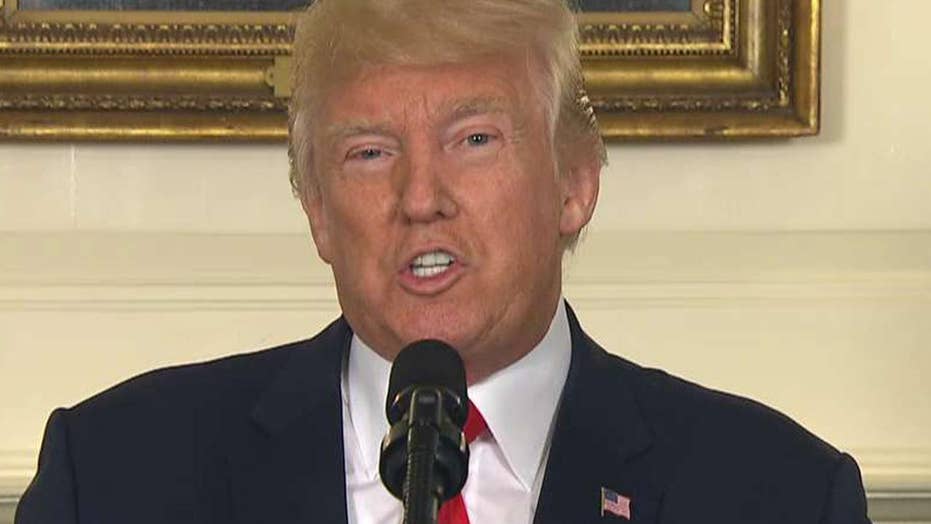 Trump: We must unite against hatred, bigotry and violence

President Trump on Monday specifically condemned “white supremacists” and “neo-Nazis” in the wake of deadly weekend clashes in Charlottesville, vowing “justice will be delivered” to the perpetrators of that "racist violence."

The president, after meeting with Attorney General Jeff Sessions and FBI Director Christopher Wray in Washington, said his Justice Department has opened a civil rights probe into the deadly car attack on Saturday.

After facing bipartisan criticism for his initial statement over the weekend, Trump was direct in his condemnation Monday.

“We condemn in the strongest possible terms this egregious display of hatred, bigotry and violence. It has no place in America,” Trump said.

He added, “Racism is evil, and those who cause violence in its name are criminals and thugs, including the KKK, neo-Nazis, white supremacists and other hate groups that are repugnant to everything we hold dear as Americans.”

The president's remarks at the White House had not been anticipated. He is in Washington for a day of meetings and work, interrupting his August vacation at his New Jersey golf club.

But he delivered the prepared statement on the heels of criticism, including from members of his own party, for not speaking out specifically or forcefully enough at first against the white supremacist groups involved in Saturday's clashes.

The president on Saturday had condemned violence and hatred on “many sides,” but faced swift criticism as video emerged from the scene in Charlottesville showing a car ramming into a crowd of counter-protesters. One person died in that attack; two state police also died in a chopper crash.

The president was again challenged, by a reporter, during a separate White House event later in the day Monday on why he did not condemn these hate groups from the start.

His remarks Monday, however, could ease some of the outcry, at least from his own party. Trump said Monday that anyone who acted criminally will be held "fully accountable."

"No matter the color of our skin, we all live under the same laws, we all salute the same great flag, and we are all made by the same almighty God," Trump said.