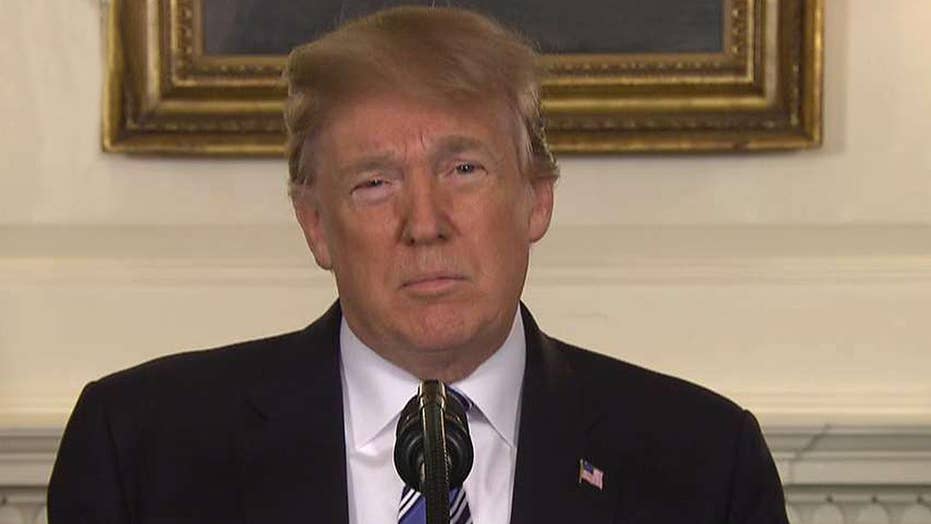 Trump says the American family is praying for the Parkland community, says no child or teacher should ever be in danger at school, thanks first responders for their courage.

President Trump on Thursday condemned the school shooting massacre in Florida as a “scene of terrible violence, hatred, and evil,” while vowing to address mental health issues amid a renewed debate in Washington over how to stop these recurring attacks.

“No child, no teacher should ever be in danger in an American school,” Trump said in the Diplomatic Room of the White House. “No parent should ever have to fear for their sons and daughters when they kiss them goodbye in the morning.”

Later in the day, the president issued a proclamation ordering all flags to be flown at half-staff in public areas and military posts until Monday, to honor the victims.

As the president focused in the aftermath of the tragedy on mental health, Democrats largely renewed their push for gun control measures -- pointing to reports the suspect had an AR-15. 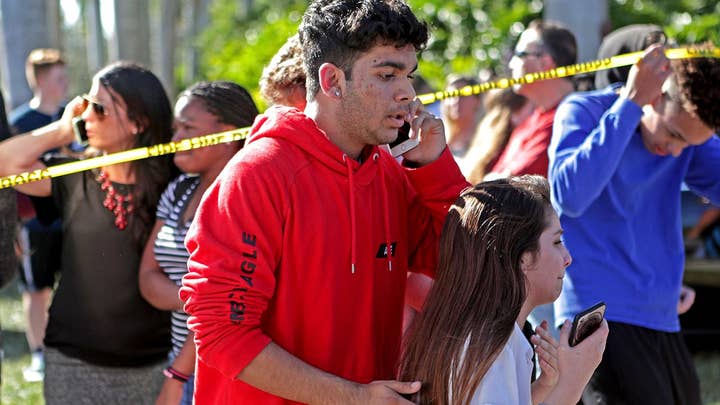 The president said Thursday he’s “committed” to working with state and local leaders to help “secure our schools and tackle the difficult issue of mental health.” Trump didn’t explicitly discuss gun control, but suggested he’s not supportive of reflexive measures.

“It is not enough to simply take actions that make us feel like we are making a difference,” Trump said. “We must actually make that difference.”

"No child, no teacher should ever be in danger in an American school"

Trump said he is making plans to visit Parkland, Fla., in the coming days to meet with families and local officials and to continue coordinating the federal response.

“We must also work together to create a culture in our country that embraces the dignity of life that creates deep and meaningful human connections and that turns classmates and colleagues into friends and neighbors,” he said.

At one point during his speech, the president directed his remarks toward “America's children, especially those who feel lost, alone, confused, or even scared.”

“I want you to know that you are never alone and you never will be,” he said. “You have people who care about you, who love you, and who will do anything at all to protect you. If you need help, turn to a teacher, a family member, a local police officer, or a faith leader. Answer hate with love. Answer cruelty with kindness.”

Nikolas Cruz, 19, was charged with multiple counts of premeditated murder after authorities said he went on the shooting spree Wednesday afternoon and killed 17 faculty and students at Marjory Stoneman Douglas High School in Parkland. Cruz is a former student of the school, police said.

Attorney General Jeff Sessions, speaking before a gathering of sheriffs in Washington on Thursday, said he has directed his office of legal policy to work with cabinet agencies to “study the intersection of mental health and criminality and identify how we can stop people capable of such heinous crimes.” 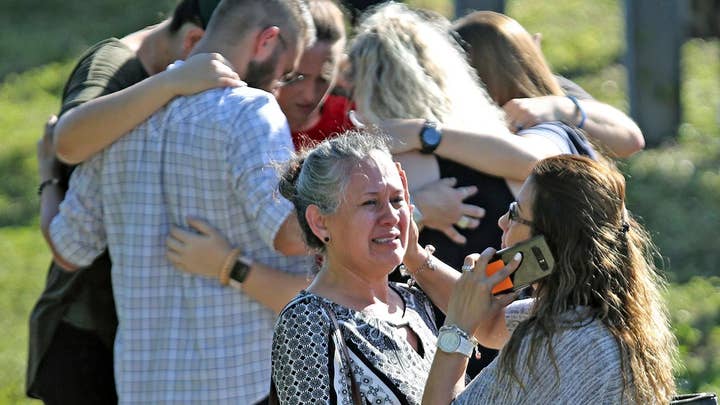 “We must confront this problem,” Sessions said.

Earlier Thursday, Trump tweeted there were so “many signs” the Florida suspect was “mentally disturbed” – suggesting more could have been done to report him to authorities.

“So many signs that the Florida shooter was mentally disturbed, even expelled from school for bad and erratic behavior. Neighbors and classmates knew he was a big problem. Must always report such instances to authorities, again and again!” Trump tweeted.

Cruz was taken into custody “without incident” Wednesday by Coconut Creek police in a Coral Springs neighborhood, located just a few miles from the high school itself. He allegedly had an AR-15 rifle and “countless magazines.”

Cruz had been expelled from the high school for “disciplinary reasons,” and math teacher Jim Gard told the Miami Herald that before Wednesday's fatal shooting, Cruz may have been identified as a potential threat.

In the aftermath of the shooting, Democrats immediately called on Congress to take up new gun legislation. Republican lawmakers are likely to push back on such calls, as they have after past shootings, focusing – as Trump did in Thursday’s tweet – on issues like mental illness.

"We are grieving with Parkland. But we are not powerless. Caring for our kids is our first job," tweeted former President Barack Obama. "And until we can honestly say that we're doing enough to keep them safe from harm, including long overdue, common-sense gun safety laws that most Americans want, then we have to change."

Sen. Dianne Feinstein, D-Calif., a prominent gun control advocate, tweeted, “Another mass shooting. Reportedly another AR-15. My bill to ban assault weapons is ready for a vote. How long will we accept weapons of war being used to slaughter our children.”

Full details of Cruz’s mental condition are not publicly known. Broward County Mayor Beam Furr told CNN he was getting treatment at a mental health clinic for a while, but hadn't been there for more than a year.