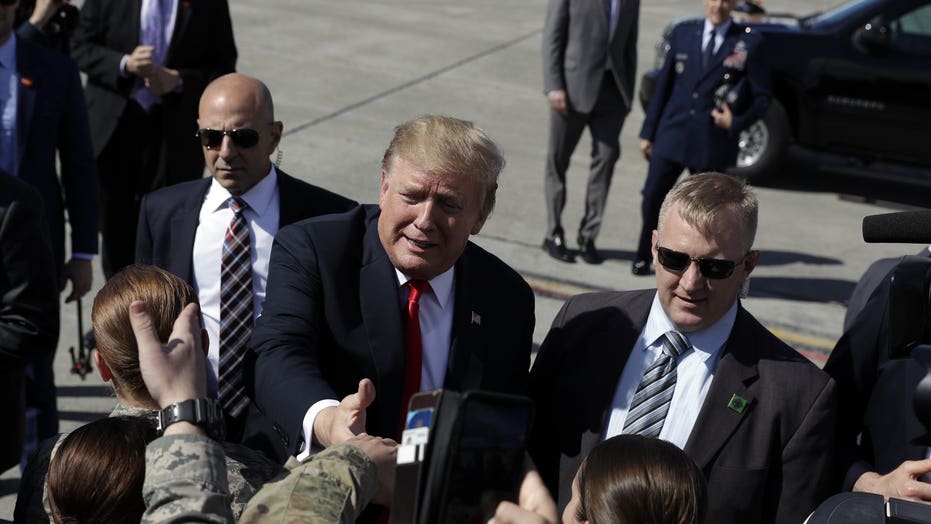 President Trump greeted military personnel in Alaska during a refueling stop on Friday while on his way to Japan for a state visit.

Trump talked with American troops on the tarmac at Joint Base Elmendorf-Richardson, posed for photos and signed caps.

“Nice stop,” he was heard saying while walking across the tarmac.

TRUMP'S JAPAN VISIT TO FOCUS ON PERSONAL TIES, NOT SUBSTANCE

“We’re here in Alaska, we’re on our way to Japan, we’re with our great military. These are great, great future leaders, right?” Trump said in a video posted on Twitter.

“We just got off the plane, I wanted to say hello, and these are tremendous people,” he continued, pointing at the troops. “So thank you very much.”

Trump was set to arrive in Japan on Saturday evening local time, with the president being the first foreign leader to meet Japan’s new emperor, Naruhito.

President Donald Trump greets troops after landing at Joint Base Elmendorf-Richardson for a refueling stop en route to Japan Friday, May 24, 2019, in Anchorage. (Associated Press)

The latest charm offensive from Japan comes amid fears among Japanese leaders that the potential U.S. tariffs on cars could be devastating to the economy.

Japanese Prime Minister Shinzo Abe likely to use his close relationship with Trump to make sure his country is spared of the tariffs.

To make that happen, the organizers of the state visit will show Trump the country’s traditions, including meeting the emperor and attending sumo wrestling matches.