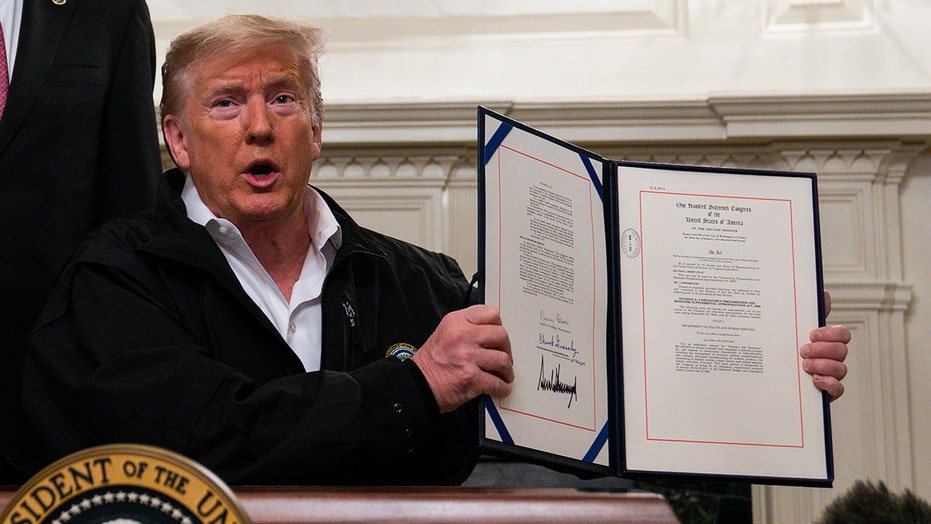 President Trump signs an $8.3 billion spending bill aiming to fight the coronavirus outbreak at the White House, says his team may still visit the CDC.

President Trump signed an $8.3 billion spending bill Friday aimed at fighting the coronavirus outbreak, the culmination of a bipartisan effort by Congress and the White House to provide funds to federal agencies, as well as state and local governments, to battle the disease.

“We’re doing well, but it’s an unforeseen problem,” the president said as he signed the legislation in the White House's Diplomatic Reception Room. He made the comments before departing for Tennessee to tour damage from tornadoes that struck the state earlier this week.

Trump also said he did not think Americans were too worried about the potential effects of the coronavirus.

"I don't think they're panicking," Trump said at the bill signing. "It'll go away."

But speaking to reporters, Trump said he still may go the CDC, saying the visit was canceled because of concerns someone at CDC may have been infected. Tests, though, have since come back negative, he said. By Friday morning, the trip to Atlanta had been added back to the president's schedule.

"They had one person who was potentially infected ... Because of the one person, at a high level," Trump said.

Vice President Mike Pence announced Thursday that Trump would sign the $8.3 billion spending bill to fund the fight against the coronavirus on Friday. The legislation passed overwhelmingly in both the House of Representatives and the Senate in a rare show of bipartisanship in a very polarized Congress.

The vice president said the efforts by health officials and lawmakers represented the “very best of D.C. coming together, putting the health and wellbeing of the American people first and making nearly $8 billion available not only to federal agencies but to state and local efforts as we confront coronavirus.”

The bill will fund the development of vaccines, medications to treat the disease and diagnostic tests all while helping state and local governments -- and foreign governments -- fight the coronavirus, which causes a disease officially known as COVID-19.

Also at the bill signing, Trump addressed a variety of other topics as he spoke with reporters, including stock market fluctuations, the Federal Reserve and Thursday's exit from the presidential race by Sen. Elizabeth Warren, D-Mass.

"I think financial markets will bounce back," Trump said as markets were down over 700 points already Friday morning. "They were up 70 percent so it's a relatively small piece. I don't like to see it happen because I was looking for 30,000 relatively soon."

On Warren, Trump said, "I think lack of talent was her problem," after a reporter asked him if he thought sexism played a role in the failure of Warren's presidential campaign. "She was a good debater, she destroyed Mike Bloomberg very quickly, like it was nothing... But people don't like her. She's a very mean person... People don't want that. They like a person like me, that's not mean."

Trump also slammed the Federal Reserve for not taking actions similar to what other central banks around the world have done.

"We're going to see whether or not the Fed wants to stimulate. In my opinion they should," Trump said. "Everybody is but us ... I have a Fed that is not exactly proactive, I'm being very nice when I say that."