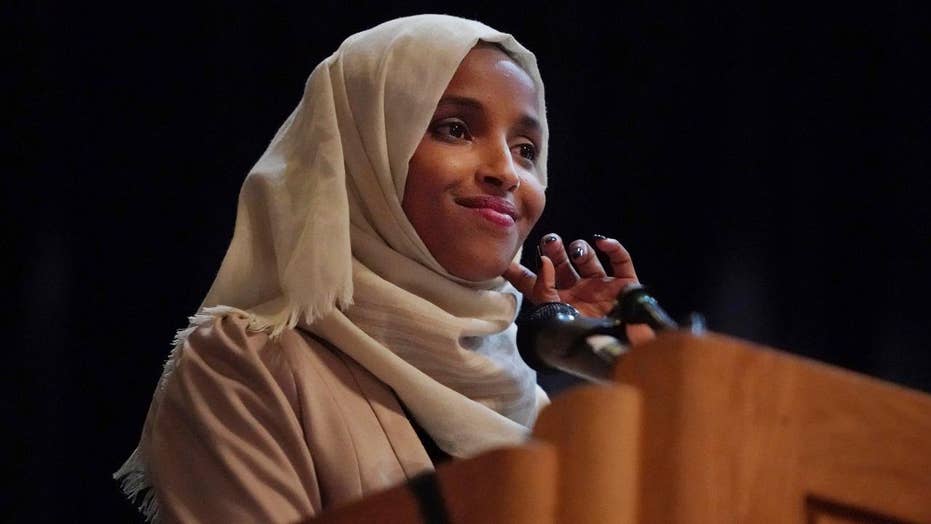 Rep. Ilhan Omar vows to 'be a nightmare' to President Trump

Democratic progressive 'Squad' member Congresswoman Ilhan Omar doubles down on her criticism of the president; reaction and analysis on 'Outnumbered.'

President Trump on Tuesday insisted he will add Minnesota to his win column in the 2020 presidential election because voters will side with him against the state’s far-left Democratic Rep. Ilhan Omar, one of the four members of the so-called “Squad” he has been feuding with for days.

“In 2016 I almost won Minnesota,” the president tweeted. “In 2020, because of America hating anti-Semite Rep. Omar, & the fact that Minnesota is having its best economic year ever, I will win the State!”

Nearly every day over the last week, the president has blasted four freshman progressive House lawmakers -- Reps. Omar, Alexandria Ocasio-Cortez, D-N.Y., Rashida Tlaib, D-Mich., and Ayanna Pressley, D-Mass. He has argued they should leave the United States if they don’t love America, provoking accusations of racism.

On Tuesday, he referenced Omar’s recent vow to be a “nightmare” for him and said: “No, AOC Plus 3 are a Nightmare for America!”

One Minnesota Democrat – Sen. Amy Klobuchar, who is running for president – hit back at Trump over his vow to win her state, which Democratic nominee Hillary Clinton narrowly won in 2016.

“You'll never win Minnesota, Donald Trump,” Klobuchar, who has struggled to gain traction in the polls, tweeted. “I'll make sure of it. Our state economy is strong because of our great workers and businesses. And the last time I checked, racist words and putting a congresswoman and her family in harm’s way aren’t very popular in our state.”

Trump, in his attacks on the progressives, has singled out Omar, who was born in Somalia but was granted asylum to the United States in 1995. The president repeatedly accuses her of anti-Semitic and anti-American views.

Omar has used inflammatory language as well in firing back at Trump. Over the weekend, she made the extraordinary claim that “this racist president wants every black/brown person deported and Muslims banned.”