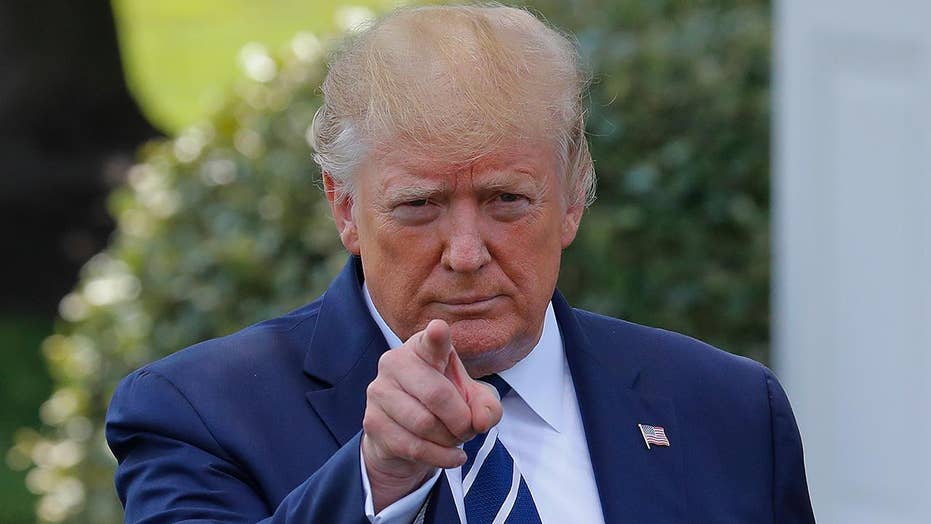 President Trump answers question from the press outside of the White House.

President Trump on Friday ripped into Democrats for their support of the four progressive lawmakers he has been feuding with this week, repeatedly claiming the so-called “Squad” of freshman Democratic congresswomen speak “garbage” about the United States.

Democrats have come to their defense over the president’s tweets, in which he declared that they should "go back" to the countries they came from -- this, though all but Omar are from the United States -- and then return to show everyone how to fix things.

Dems also condemned the attendees at a Trump rally this week over their Omar-focused chant, "Send her back.”

Speaking to reporters Friday afternoon, Trump did not back down from his criticism.

“I think what they say, and what they’ve said, is a disgrace to them, to the Democrats and frankly to our country,” he said.

Earlier this week, House Speaker Nancy Pelosi pushed back hard against Trump’s efforts to cast the quartet of congresswomen as the face of her party.

PELOSI RIPS TRUMP BID TO LINK DEMS TO ‘SQUAD,’ VOWS NOT TO ‘WASTE OUR TIME ON THAT’

"You have to give him credit, he’s a great distractor, that’s what this is about,” Pelosi said. “So let’s just take it to a better place: America.”

Trump's tweets on Tuesday were formally condemned by the House, 240-187.

During his comments at the White House Friday, Trump also confirmed that he’s asked Kentucky Sen. Rand Paul to help with the developing Iran situation. Politico reported earlier this week that Paul asked Trump if he could meet with Iranian Foreign Minister Mohammad Javad Zarif to reduce tensions between the two nations.

“Well, Rand is a friend of mine," Trump said. "And Rand asked me if he could get involved, and the answer is yes.”

The president also waded into efforts across the country to ban plastic straws, after his presidential campaign began selling branded plastic straws and declared that “liberal paper straws don’t work.”

“I do think we have bigger problems than plastic straws,” Trump said. “It's interesting about plastic straws. You have a little straw. What about the plates, the wrappers and everything else that are much bigger and they're made of the same material? So the straws are interesting. Everybody focuses on the straws. There is a lot of other things to focus on."