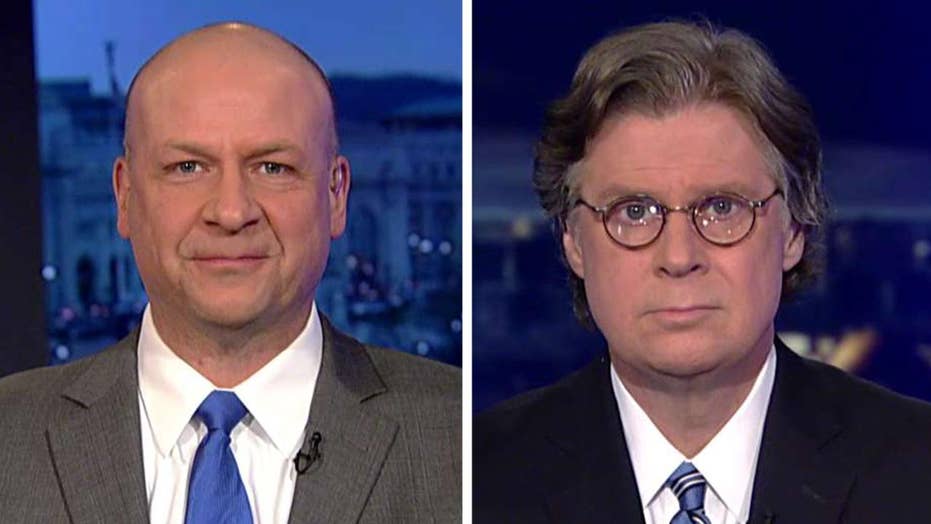 President Trump’s decision to sign the border funding bill and declare a national emergency in order to seek additional funding for his wall may be a “risky” one, Real Clear Politics co-founder Tom Bevan argued Thursday.

Earlier in the day, Senate Majority Leader Mitch McConnell, R-Ky., announced that the president would sign the spending bill, which passed both the Senate and House, and that he would also support the president’s pursuit of a national emergency declaration to get the full $5.7 billion that was not included in the bipartisan legislation. (Later, a source told Fox News that the president planned to allocate $8 billion for the wall.)

Bevan called the decision a “risky move” and listed the pros and cons President Trump faces.

“It does certainly shore up his base and he keeps the issue top of the line. I think the contrast that Trump likes is it’s a matter of opinion, He says this is a national emergency and Democrats are rushing to the barricades to say, ‘This is a complete fiction, it’s an invention.’ That’s a contrast he wants,” Bevan told the panel. “The downside is it puts the focus back on a split in the Republican caucus. The media will certainly cover the Republicans that are going to come out and say ‘This isn’t the proper way to go.’ So after Trump got a pretty significant bump in his job approval rating after the State of the Union speech in part because of the bipartisan message, I think. He’s back to brawling and so we’ll see how this works out for him, but it’s definitely a risky move on his part.”

York insisted that the president had to sign the bill because he caved during the partial government shutdown due to political pressure and that “his signature” was the only thing that would prevent the next shutdown.

Meanwhile, Page suggested that Democrats could vote to repeal Trump’s national emergency, adding that it would “certainly” pass in the House and possibly in the Senate as well.