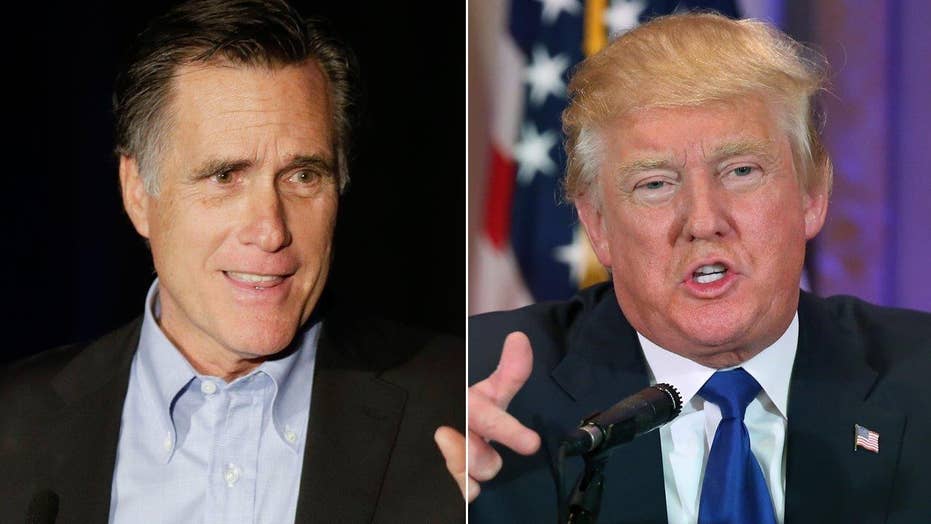 Will Romney speech make any difference?

Strategy Room: Joe Lestingi and Adam Goodman discuss split among Republican Party and whether Trump can look presidential while fighting back against critics

Donald Trump answered Mitt Romney’s public indictment Thursday of his front-running Republican bid by skewering the 2012 GOP presidential nominee as a “failed candidate” who “let us down” with his loss to President Obama.

“Mitt is a choke artist,” Trump told supporters at a pre-debate rally in Portland, Maine.

Trump went on to call Romney disloyal, claiming he begged Trump for his endorsement the last time around.

“You can see how loyal he is. … I could have said Mitt, drop to your knees, he would have dropped to his knees,” Trump said.

Click here for live coverage of the Fox News debate

He spoke after Romney delivered a scathing speech at the University of Utah about the prospect of a Trump presidency, in what amounted to perhaps the most full-throated effort yet by a member of the so-called Republican establishment to thwart Trump’s march to the nomination.

The party’s 2012 presidential nominee issued a stark warning that Trump’s policies would lead to recession and “make America and the world less safe” -- and said the “only serious policy proposals” are coming from the other Republican candidates on the field.

“I understand the anger Americans feel today,” Romney said, but added: “Here's what I know. Donald Trump is a phony, a fraud. His promises are as worthless as a degree from Trump University. He's playing ... the American public for suckers: He gets a free ride to the White House and all we get is a lousy hat.”

The speech comes ahead of the Fox News Republican primary debate Thursday night at 9 p.m. ET in Detroit, the candidates' first showdown since Super Tuesday.

Trump swiftly responded to the ex-GOP nominee, taking to Twitter to claim he’s the “only one who can beat Hillary Clinton” and recalling Romney’s record in the presidential elections so far.

Later at his rally in Maine, despite claiming he wouldn’t spend much time responding to Romney’s “irrelevant” remarks, Trump delivered a point-by-point rebuttal to many of Romney’s charges.

To Romney’s criticism of his business record, Trump said, “I made so much more money than Mitt,” and pointed to his successful ventures across New York City.

He also said Romney begged him for his endorsement in 2012 – but Romney later tweeted that if Trump had said the things he’s saying today, he would not have accepted that endorsement.

The address earlier Thursday amounted to an astonishing full-court press by Romney to stop Trump from winning the party’s nomination. Until now, Romney has mostly criticized Trump via Twitter and media interviews, but this is his most robust effort yet to rally the party and primary voters against the GOP front-runner.

Romney cast his alarm-bell warnings Thursday in dire terms, suggesting nothing less than the character of the nation is at stake, and saying Trump’s “brand of anger” has led “other nations into the abyss.” He said Trump “lacks the temperament to be president,” rebuking him for “bullying” and “greed” and “misogyny.” He borrowed a phrase from Marco Rubio, calling Trump a “con man” to boot.

On the sidelines, the party’s 2008 nominee also seemed to join with Romney in expressing concerns.

“I share the concerns about Donald Trump that my friend and former Republican nominee, Mitt Romney, described in his speech today,” Sen. John McCain, R-Ariz., said in a statement, urging voters to “think long and hard about who they want to be our next Commander-in-Chief and leader of the free world.”

Romney has not yet endorsed a candidate in the race, or moved any closer publicly to reconsidering a run himself. Romney weighed another White House run at the beginning of 2015 before deciding against the move, reportedly after being out-raised by former Florida Gov. Jeb Bush -- who has since suspended his campaign.