President Trump on Friday announced that new Centers for Disease Control guidance will classify houses of worship as “essential,” as he called on governors to allow them to open “right now” after being closed during the coronavirus lockdowns.

Trump announced the policy for churches, synagogues and mosques, during a short briefing at the White House.

"The governors need to do the right thing and allow these very important essential places of faith to open right now--for this weekend," Trump said. "If they don't do it, I will override the governors."

"In America, we need more prayer not less," Trump added.

It's unclear under what authority Trump has to override governors. But Trump took issue with certain businesses being open, while churches are not. Attorney General William Barr already warned last month that coronavirus restrictions by state and local government should be applied evenly and not single out religious organizations.

"Some governors have deemed the liquor stores and abortion clinics as essential," Trump said. "But have left out churches and other houses of worship. It's not right. So I'm correcting this injustice and calling houses of worship essential."

The Centers for Disease Control and Prevention released interim guidelines Friday for communities of faith that acknowledge "millions of Americans embrace worship as an essential part of life" but also warn that "gatherings present a risk for increasing the spread of COVID-19."

The guidelines encourage the use of cloth face coverings during services, limiting the size of gatherings, social distancing during services and suspending or decreasing choirs and singing in church since "singing may contribute to transmission of COVID-19, possibly through emission of aerosols," the CDC says.

Last week the CDC released new guidelines that schools, businesses and other organizations can use as states reopen from coronavirus shutdowns. The document, however, excluded guidance for churches and faith-based groups because the White House raised concerns about the recommended restrictions, the Associated Press reported.

Cities across the country have been taking their cues from their governors on when and how to reopen. New York Gov. Cuomo's executive order still remains in effect in hard-hit New York City, officials said Friday.

"Houses of worship never closed in New York City, but have been under reasonable capacity requirements that prohibit large gatherings," said Olivia Lapeyrolerie, Mayor Bill de Blasio's deputy press secretary. "We will continue to work closely with faith leaders to ensure people can safely worship during these stressful times, but will not take any steps that could jeopardize New Yorkers' health."

The White House's Friday announcement comes after Trump has been hearing an earful from faith leaders who are unable to hold services due to coronavirus restrictions at a time when their parishioners are grappling with the crisis. Families may be grieving the loss of loved ones from the virus or struggling with job losses but unable to seek respite in their places of worship. 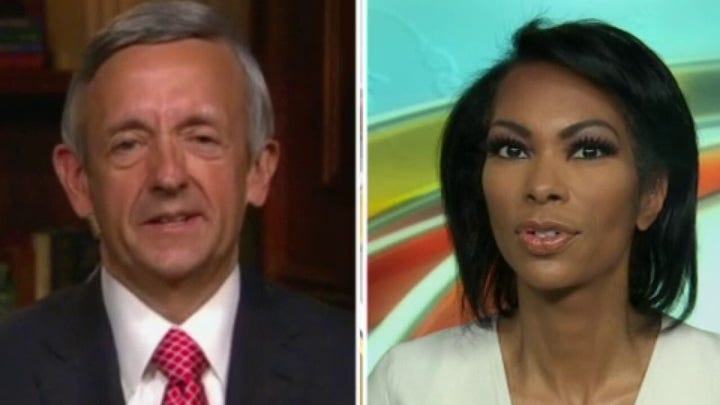 On Thursday, Trump had a conference call with 1,600 pastors and faith leaders from around the country, including Tony Perkins, president of the Family Research Council. He reassured them he wants to get churches reopened. The evangelical Christian community was instrumental in supporting Trump during his 2016 White House bid and he's maintained strong ties with Christian leaders throughout his presidency.

Trump telegraphed the decision a day earlier when he announced he spoke to the CDC on finding ways to reopen houses of worship during the pandemic.

"We've got to get our churches open," Trump said Thursday.

Churches across the country had to close down due to stay-home orders necessary to stop the spread of the contagious virus. Faith leaders set up online services and families tuned in Sunday mornings from their computers at home.

Earlier in the pandemic, Trump expressed optimism that churches would be opened by Easter Sunday, April 12. But April turned out to be an extremely deadly month for the pandemic, and parishioners had to celebrate Easter from home.

Some faith leaders have argued that social distancing rules have violated First Amendment religious freedoms. Others have defied state and local rules and tried to reopen.

But other faith leaders warned that congregating is too dangerous right now.

“The President is wrong, plain and simple," said Rabbi Jack Moline, president of Interfaith Alliance. "...The virus does not discriminate between types of gatherings, and neither should the president ... It is completely irresponsible for the president to command a mass reopening of houses of worship. The illness and death that afflicts religious communities who follow the president's dictates will be his responsibility.”

MORE THAN 1,200 CALIFORNIA PASTORS VOW TO HOLD SERVICES IN DEFIANCE OF STATE ORDER

Earlier this week, the Centers for Disease Control and Prevention released a report that showed just how quickly the virus can spread at church. The study showed that two symptomatic people who later tested positive for COVID-19 attended church events in rural Arkansas back in early March. At least 35 of 92 attendees at the events contracted the virus and three of them died. Twenty-six other people in the community with links to the church have also contracted the virus, with one person dying

"We stayed home so the virus quieted down and stopped spreading widely where it was spreading widely, but it's still out there," former CDC director Tom Frieden told Fox News Wednesday. "So anytime you have a lot of people together in an indoor space and one of them is infectious, you can have a lot of cases."