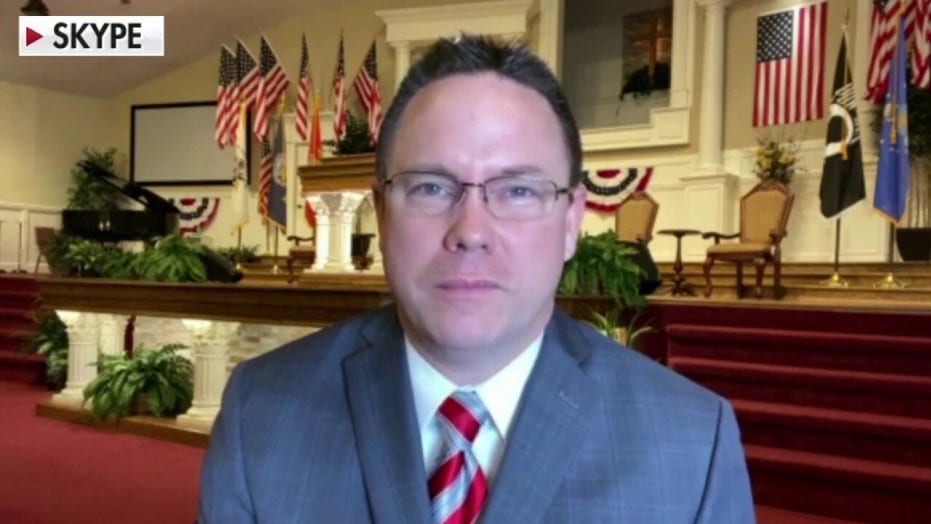 A Baltimore pastor tore up a cease-and-desist letter mid-sermon Wednesday night after local officials threatened a $5,000 fine earlier in the week for holding in-person services.

Maryland Gov. Larry Hogan announced last Friday that houses of worship could reopen at 50 percent capacity, citing declining hospitalizations related to the coronavirus pandemic. He left the timing up to local jurisdictions. The state has had more than 41,000 confirmed coronavirus cases and at least 2,081 deaths.

Stacey Shiflett, pastor of the 400-member Calvary Baptist Church in Dundalk, held a Wednesday night service. With more than 100 congregants in the 600-capacity sanctuary, Calvary was in compliance with Hogan's order but in defiance of the Baltimore County Department of Health and Human Services' order.

"Either we have liberty to worship or we have permission to worship," Shiflett told Fox News about his decision. "It has become abundantly clear that if we settle for permission, we will never have liberty again."

The Baptist pastor posted video of the shredding on Twitter, in which he can be heard preaching: "With this cease-and-desist letter in my hand, the Bible says to the New Testament church 'not forsaking the assembling of yourselves together as the manner of some is, but so much more as you see the day approaching,' and the closer we get to Jesus coming back, the more church we ought to be having, not less church."

"Now that's God's parameters," he added. "So I'm tearing up this cease-and-desist order right here, and I'm telling you right now, we're gonna do it God's way! God tells us how to worship Him, nobody else gets to do that."

Shiflett said a number of other churches in the state plan on reopening this Sunday during Memorial Day weekend and he is attending a ReOpen Maryland freedom rally Friday to offer a prayer after he was invited by organizers.

"We're challenging our local officials to render the church essential so we can get our doors back open," he said as the Baltimore County executive reportedly reopened small businesses and other establishments Thursday.

David Gibbs III of the National Center for Life and Liberty and legal counsel for Calvary Baptist told the local CBS station: “If Walmart's open, it’s time for the churches to be open.”

The pastor doesn't plan on budging: "I don't plan on shutting the church. If they fine us, I'm not paying it. It's unconstitutional. They don't have a leg to stand on."

Baltimore Mayor Jack Young extended the stay-at-home orders limiting public gatherings, including "spiritual" and "religious," to no more than 10 people.

"We got a mayor saying we can only worship in our parking lots, which is ridiculous," Rev. Alvin Gwynn, pastor of Friendship Baptist in Baltimore City, told WJZ-TV.

The pastor said the police car parked outside his church is being used to intimidate him and the Friendship Baptist churchgoers.

"The city has no legal standing," Gwynn told WBAL. "What are they going to do? Have officers come, and take body cameras and record you, and then go back and talk to their attorneys to see what they can do with them or not? That's nothing but intimidation."

The Department of Justice warned California Gov. Gavin Newsom Tuesday that his order could discriminate against churches.

“Simply put, there is no pandemic exception to the U.S. Constitution and its Bill of Rights,” wrote Assistant Attorney General Eric Dreiband.

The battle to reopen houses of worship is being waged across states between state and local officials.