Perdue on protecting farmers from trade fight with China

The Trump administration announced Tuesday that it will grant up to $12 billion in emergency aid to farmers hurt by retaliatory tariffs in the ongoing trade fight with China and other American trading partners.

Secretary of Agriculture Sonny Perdue said that the plan, which will provide direct assistance and other temporary relief for farmers through the USDA’s commodity program, is meant as a stopgap to give Trump time to negotiate a long-term policy with China, the European Union and others.

The plan was announced as Trump spoke at the Veterans of Foreign Wars national convention in Kansas City, where he urged patience in dealing with the tariffs and claimed that “farmers will be the biggest beneficiary” of the trade deals in the end.

“Farmers will be the biggest beneficiaries,” Trump told the crowd gathered inside Kansas City’s Municipal Auditorium. “We’re going to do something that has never been done.” 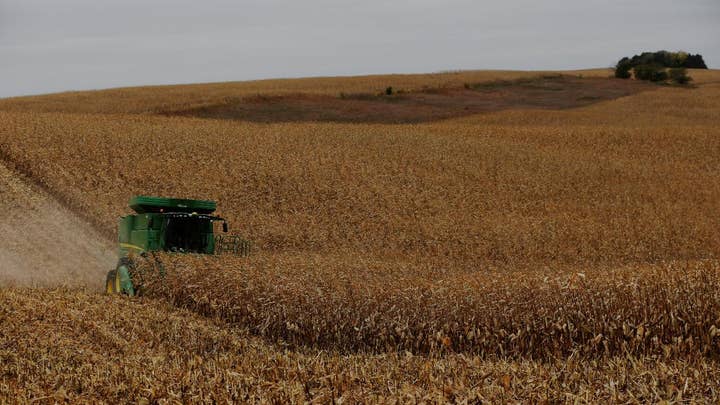 Trump also touted the adminstration's economic success, calling it a "great economic revival," and told farmers to "stick with us" as he continues trying to sort out trade deals.

"Just stick with us," he said. "Don't believe what you hear on the fake news."

The plan, however, has already magnified objections among some Republicans that the tariffs amount to taxes on American consumers. House Speaker Paul Ryan of Wisconsin said lawmakers are making the case to Trump that tariffs are "not the way to go."

"America's farmers don't want to be paid to lose — they want to win by feeding the world," he said. "This administration's tariffs and bailouts aren't going to make America great again, they're just going to make it 1929 again."

Speaking to reporters outside of a GOP lunch on Tuesday, Sen. Ron Johnson, R-Wis., compared the trade assistance to something out of the former Soviet Union.

"This is becoming more and more like a Soviet-type of economy here" with "commissars" passing out benefits, Johnson said, according to The Hill.

The Trump administration has slapped tariffs on $34 billion in Chinese goods in a dispute over Beijing's high-tech industrial policies. China has retaliated with duties on soybeans and pork, affecting Midwest farmers in a region of the country that supported the president in his 2016 campaign.

Trump has threatened to place penalty taxes on up to $500 billion in products imported from China, a move that would dramatically ratchet up the stakes in the trade dispute involving the globe's biggest economies.

The administration has also engaged in hardline trading negotiations with Canada and European nations, seeking to renegotiate agreements he says have undermined the nation's manufacturing base and led to a wave of job losses in recent decades. 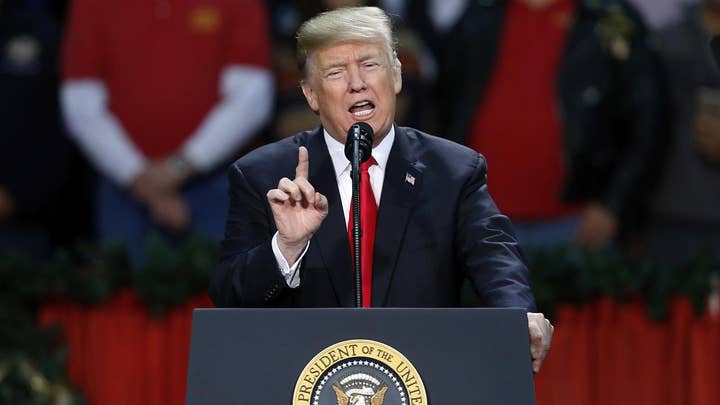 The imposition of punishing tariffs on imported goods has been a favored tactic by Trump, but it has prompted U.S. partners to retaliate, creating risks for the economy.

Trump has placed tariffs on imported steel and aluminum, saying they pose a threat to U.S. national security, an argument that allies such as the European Union and Canada reject. He has also threatened to slap tariffs on imported cars, trucks and auto parts, potentially targeting imports that last year totaled $335 billion.

The president on Wednesday will meet with European Commission President Jean-Claude Juncker at the White House as the EU hopes to convince him to hold off from raising tariffs on imported cars and avoid a trans-Atlantic trade war.

During his speech in Missouri, Trump appeared less than conciliatory in his approach to European allies. He called the EU “terrible” and said the U.S. was losing billions of dollars.

“These countries have been ripping us off for decades,” he said. “What the EU is doing is terrible.”

The stakes are high, as the car industry carries huge heft in terms of trade and jobs in both the EU and U.S.

The European car federation says that the United States is the No. 1 destination for EU-built cars, amounting to almost 30 percent of the total EU export value. It accounts for a quarter of U.S. car imports.

If Trump imposes a 25 percent tariff on imports of cars, trucks and auto parts, it "risks dragging us all down to a game of tit for tat retaliations that ultimately leave consumers in the U.S. as well as in Europe worse off," said Professor Alexander Mattelaer of the Egmont Institute think tank.