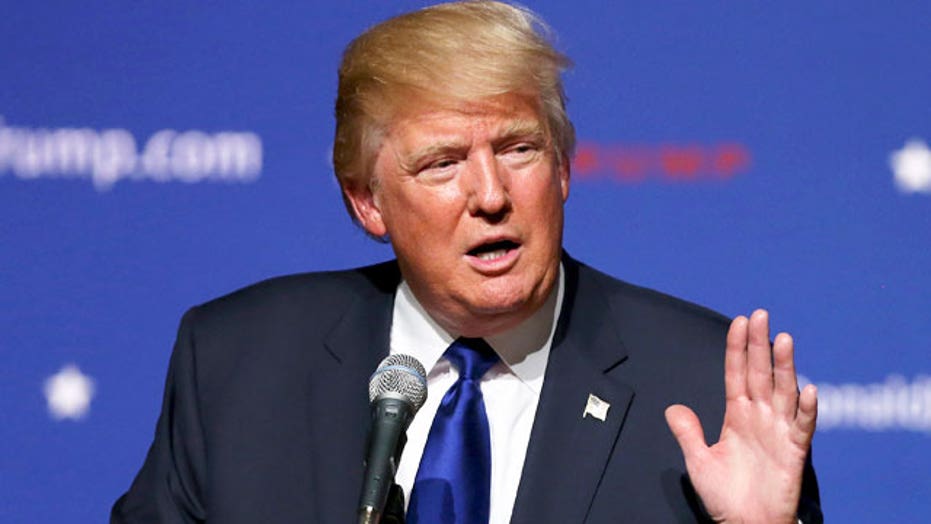 After walking down a stage surrounded by waving American flags and signs reading "Make America Great Again!," Trump announced, "I would like to have the election tomorrow...I don't want to wait."

Trump's speech was similar to the one he made in New Hampshire. The Republican frontrunner attacked Former Florida Governor Jeb Bush on illegal immigration and how he is now using the controversial term "anchor babies" -- a reference to children being born in the US from illegal immigrants.

"Now [Jeb] wants to use it because I use it," Trump explained.

Trump was welcomed by an array of Alabama politicians, including Republican Sen. Jeff Sessions, who praised him for the attention he's drawn to immigration issues. And Trump led off his speech with more criticism of immigrants living in the country illegally, drawing loud cheers when he repeated his promise to build a wall on the U.S.-Mexico border.

He reiterated his intention to end "birthright citizenship" for children of immigrants here illegally.

After one member of the audience held up Trump's best-selling "Art of the Deal" book, he signed it and said President Obama should read it -- adding "the best book in the world" is The Bible.

Trump also attacked the Obama administration's deal with Iran to restrict that country's nuclear program, calling it "so sad."

Aug. 21, 2015: Donald Trump supporters wait in line outside Ladd-Peebles Stadium hours before the start of a rally in Mobile, Ala. (Sharon Steinmann/AL.com via AP)

Hundreds of people lined up hours before Donald Trump's arrival at a football stadium Friday, eager to see and hear the Republican presidential candidate, television star and New Yorker hold a rally in the Deep South.

The fans, some carrying signs, others wearing T-shirts supporting the billionaire businessman, spoke of his outsider status in a crowded field dominated by former and current elected officials as the song "Sweet Home Alabama" blared from loudspeakers.

Interest in the candidate forced organizers to move a planned rally from the Mobile Civic Center, which holds about 2,000 people, to Ladd-Peebles Stadium, a 40,000-seat football stadium.

The Alabama secretary of state's office said more than 30,000 were expected to attend the event Friday night. However, it didn't seem that high.

Earlier this week, Trump said he wanted to end "birthright citizenship" for children of immigrants here illegally, rescind Obama administration executive orders on immigration and expand deportation, allowing only "the good ones" to return through an expedited process.

Native-born children of immigrants - even of those living illegally in the U.S. - have been automatically considered U.S. citizens since the adoption of the Constitution's 14th Amendment in 1868.