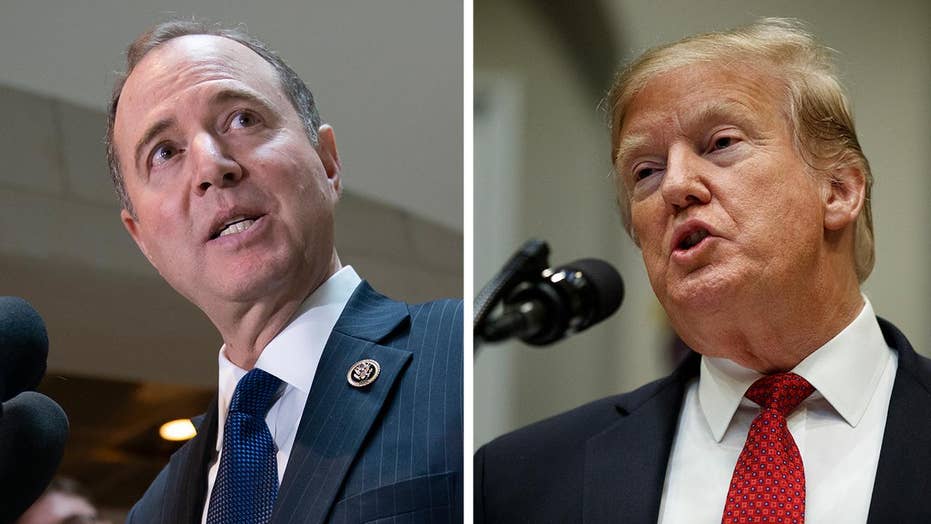 Following Trump's denouncement of the 'ridiculous partisan investigations' lined up against him, the chairman of the House Intelligence Committee announces he will not only be investigating Trump campaign ties to Russia, but the president's personal financial dealings as well; chief White House correspondent John Roberts reports.

“So now Congressman Adam Schiff announces, after having found zero Russian Collusion, that he is going to be looking at every aspect of my life, both financial and personal, even though there is no reason to be doing so. Never happened before!” Trump tweeted early Thursday.

“Unlimited Presidential Harassment,” he continued. “The Dems and their committees are going ‘nuts.’ The Republicans never did this to President Obama, there would be no time left to run government. I hear other committee heads will do the same thing. Even stealing people who work at the White House! A continuation of Witch Hunt!”

He added moments later: "PRESIDENTIAL HARASSMENT! It should never be allowed to happen again!"

The intelligence committee on Wednesday also voted to hand over interview transcripts to Special Counsel Robert Mueller that were generated by the panel’s previous Russia investigation, which was led by former chairman, now-Ranking Member Devin Nunes, R-Calif., who proved to be an ally of the president. The Nunes-led probe ended last March after finding “no evidence” of collusion between the Trump campaign and Russia during the 2016 presidential election.

Republicans had previously voted to release the transcripts of witness interviews publicly, but the intelligence community has since blocked the move to ensure no sensitive or classified materials are disclosed.

Schiff, though, has been after the president since last year, charging in 2018 that Trump’s financial records with Deutsche Bank and Russia may reveal a “form of compromise” that “needs to be exposed.” Schiff has long maintained that there had to be some reason that the German banking giant, which has what he called a “history of laundering Russian money,” was willing to work with the Trump Organization.

In response, Trump blasted Schiff as a “political hack.”

“He has no basis to do that. He’s just a political hack who’s trying to build a name for himself,” Trump said. “It’s just presidential harassment and it’s unfortunate and it really does hurt our country.”

Trump had warned during his State of the Union address on Tuesday night that an “economic miracle is taking place in the United States—and the only thing that can stop it are foolish wars, politics or ridiculous partisan investigations.”

In a separate part of the panel’s investigation, Schiff announced Wednesday that he would postpone an upcoming closed-door interview with Trump’s former personal attorney Michael Cohen. Schiff said Cohen would appear, instead, on Feb. 28. Schiff cited the “interests of the investigation” for the reason why the hearing was rescheduled.

Cohen was also subpoenaed by the Senate Intelligence Committee. Davis has signaled that his client will comply with the subpoena and appear before the committee, but the date for when that will occur remains unclear. Cohen does not have to report to prison until March 6.