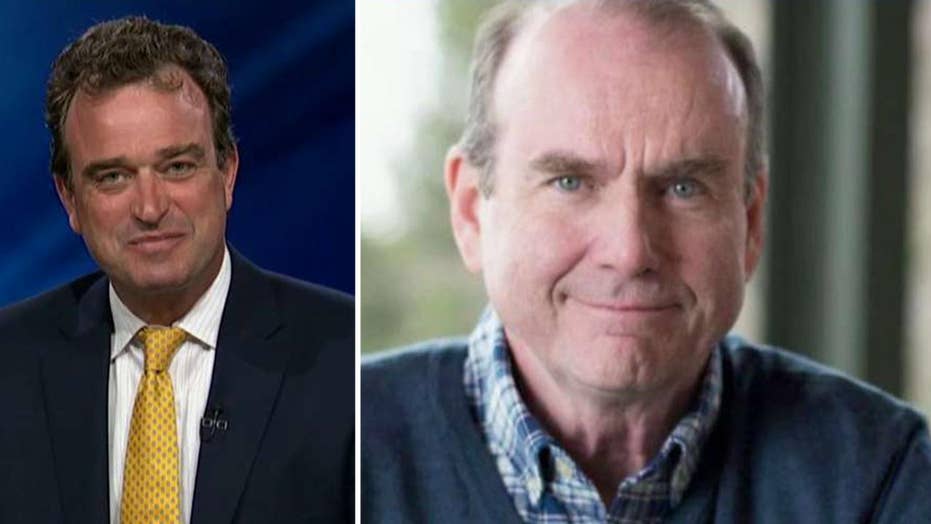 A liberal millionaire now running for Congress in Pennsylvania -- and railing against the influence of money in politics -- has a history of making large donations to former President Barack Obama's campaign and other efforts.

Wallace has made criticism of money in politics a campaign issue, saying money “corrupts” politics and slamming President Trump for giving access to wealthy donors.

As he was donating to various Obama funds, Wallace also began his efforts to become the U.S. ambassador to South Africa, his so-called “second country,” where he lived for several years while overseeing the Wallace Global Fund’s projects in the country, by directly pushing a top Obama official to consider him for the role.

"It has become my second country, and I would be deeply honored to be considered to represent President Obama as ambassador there."

“I know you must have a million things on your plate, but as I mentioned to you, Elizabeth and Smith Bagley were encouraging me to reach out to you sooner rather than later about a possible appointment in an Obama administration,” Wallace wrote to Podesta on Nov 3, 2008, according to an email released by WikiLeaks.

“I am passionate about helping South Africa achieve its full promise, and see its upcoming elections and the next couple of years as critical to the health of its democracy. It has become my second country, and I would be deeply honored to be considered to represent President Obama as ambassador there,” he continued, openly offering his diplomatic services.

“I imagine that my service under Republicans in the Senate, as well as subsequent decades of working with Democratic Judiciary Committee leadership, should be of some help with Senate confirmation,” he added.

"I took the liberty of listing you as a reference in the application forms at change.gov, but then wondered if perhaps those need to be names outside the formal transition process."

The liberal millionaire returned to the issue a few weeks later, sending another email to Podesta, who spearheaded Obama’s transition team, saying he listed Podesta as a reference in an application to work in the administration.

“John, I meant to ask you this at the Democracy Alliance conference, but had to duck out just before the end of your session … I took the liberty of listing you as a reference in the application forms at change.gov, but then wondered if perhaps those need to be names outside the formal transition process,” he wrote.

“John, let me also offer my assistance to the personnel team in a range of areas. From my 13 years as a grantmaker, and about 20 years in the field of criminal justice policy and research, my job is generally to identify and invest in the highest quality leaders of the most effective organizations,” Wallace wrote in a follow up email.

"Money corrupts politics and it corrupts it absolutely."

That history appears to contradict Wallace’s more recent statements about his views on the influence of money in politics.

“Money corrupts politics and it corrupts it absolutely,” Wallace said earlier this year at the Bucks County (Pa.) Democratic Forum.

“But when his buddies in Congress, like Paul Ryan and Brian Fitzpatrick, finally OK’d his massive tax cuts for corporations and billionaires, what did Trump do? Jetted to his Florida country club and bragged to a roomful of people who paid $200,000 to get in the door, that they all ‘just got a lot richer.’ Oooh, that’s rich,” Wallace said in a March news release.

Even in 2011, Wallace decried contributions from “wealthy elites” and suggested the U.S. political system was being ruined by such donors.

“Sacrifice is expected, improving your own lifestyle is not. This is not to say that American politics today is not awash in big money. Our political parties and politicians are massively dependent on contributions from corporations and wealthy elites,” he wrote in an op-ed for South Africa's Cape Times.

The Wallace campaign told Fox News that Wallace “would have been honored to join” the Obama administration and accused Fitzpatrick’s campaign of taking money special interests.

"Scott is proud to have supported Obama throughout the years and like many people would have been honored to join his administration."

“Scott is proud to have supported Obama throughout the years and like many people would have been honored to join his administration,” said Zoe Wilson-Meyer, communications director for Wallace’s campaign.

Fox News reported In June that the Fitzpatrick campaign received an unsolicited $5,400 donation from Kidan, which was shortly re-donated to two local charities, with the Bucks County Opportunity Council and Bucks County Down Syndrome Interest Group receiving $2,700 each.