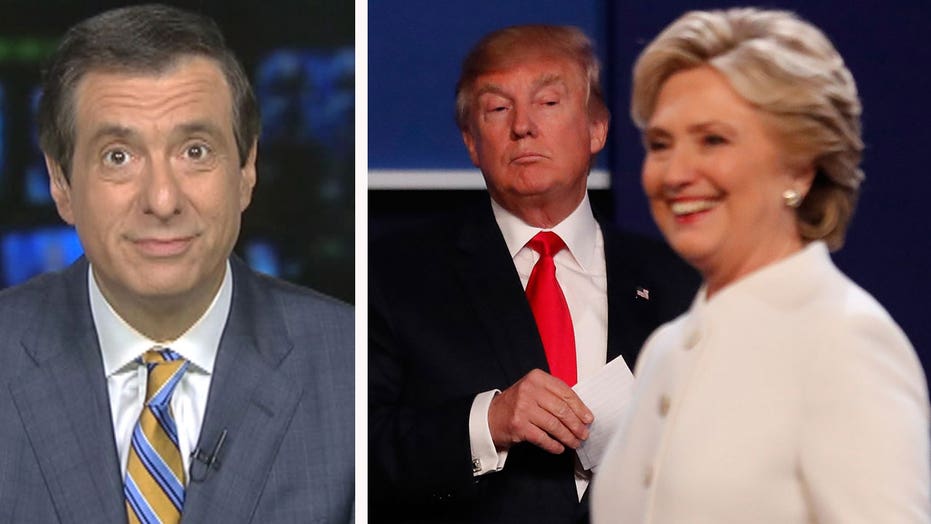 Kurtz: Many pundits declare race over

Is the press declaring the presidential race over?

The tenor of the coverage certainly suggests that Donald Trump has no hope and Hillary Clinton is coasting to victory.

Whether it’s the third debate, the latest polls, the Al Smith dinner or a feeling that they’ve finally slayed the Trump dragon, many pundits are now portraying the billionaire’s plight as Mission Impossible.

I’m always more cautious than that. I’ve seen too many elections where a candidate bounced back after being written off, the polls were off, or some unexpected event moved the needle.

Is Clinton now the favorite to reach 270 electoral votes, or, according to some forecasts, much more? Sure.

But it’s not over.

You don’t have to look very far to see the Trump-is-sinking narrative. It’s as if the media left open the possibility that he could still shake up the race in the third debate, until the Las Vegas faceoff ended with him being attacked by both parties for not promising to accept the election outcome.

This goes beyond the horse race stories. You see it when the Washington Post analyzes how the pro-life movement will fare in a Hillary Clinton administration.

You see it with a New York Times headline, "Clinton Hopes for a Mandate and Coattails."

You see it when Politico runs a big piece on whether Hillary will tap Facebook's Sheryl Sandberg as Treasury secretary and, yes, handicaps who's on the short list to be her Agriculture secretary.

You see it when Fox's Karl Rove says Trump will have a very hard time coming back and it leads the Huffington Post: "ROVE: HE'S TOAST."

“A wave of apprehension and anguish swept the Republican Party on Thursday, with many GOP leaders alarmed by Donald Trump’s refusal to accept the outcome of the election and concluding that it is probably too late to salvage his flailing presidential campaign.”

And there was this Post headline over the weekend: "Donald Trump is in a funk: Bitter, hoarse and pondering, ‘If I lose. . .’"

Then, of course, there are the polling and prognostication stories:

“Even if Trump ran the table in the remaining battleground states — Florida, Iowa, Nevada, North Carolina and Ohio — he would fall short of the White House if he cannot flip another state where Clinton currently leads in the polls,” says Politico.

“The six states where Clinton is currently comfortably ahead show all the hallmarks of swing states that have faded from contention.”

“I’m not sure I need to tell you this, but Hillary Clinton is probably going to be the next president. It’s just a question of what ‘probably’ means.”

“With less than three weeks to go, and all of the debates blessedly in the rearview mirror, Clinton is in a commanding position in the contest to become the 45th president…

“A striking development in recent days has been the smattering of polling showing Trump with weak leads in some reliably Republican states. He’s barely ahead in some polls of Alaska, Indiana, Missouri, South Carolina, and Texas — states that shouldn’t be close in any competitive election…

“We have moved Utah to Toss-up. Seriously, did you ever even for a second think Utah would be a Toss-up in late October?”

These are fair questions in studying the electoral map. Yes, the L.A. Times poll calls the race a tie and an IBD poll gives Trump a 2-point lead, but these seem to be outliers, and in any event the race will be decided in Florida, Ohio, North Carolina, Colorado, Arizona and a handful of other states.

I have the growing sense that journalists want this long and rather ugly election to be over, and that much of the country does as well.

But remember what Yogi Berra said. And we still have two weeks to go.