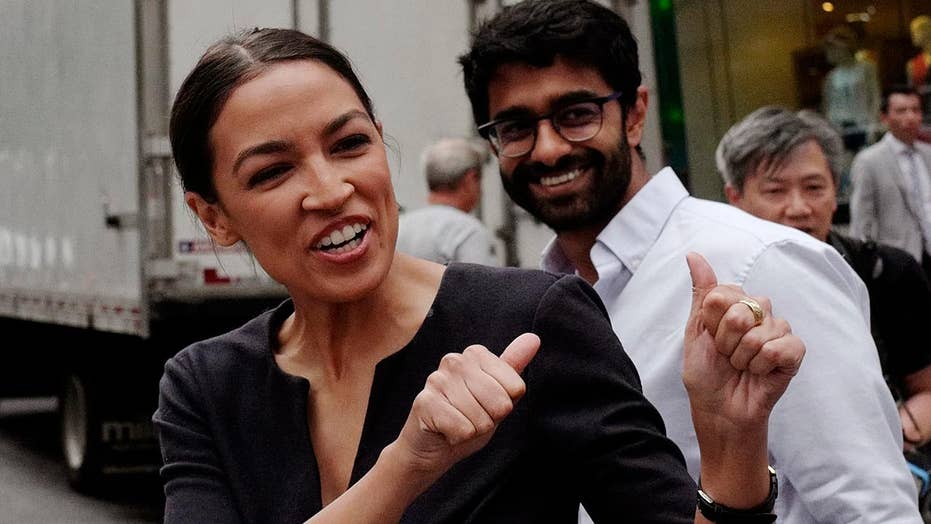 Democrat socialist candidate built up by the press as the new face of the party.

I think we can all agree that for a congresswoman to refer to a 28-year-old candidate as "this girl" is rather belittling. I haven't heard such a condescending term since Bill Clinton denied having sexual relations with "that woman."

But there's no mystery why Ron DeSantis is going after Alexandria Ocasio-Cortez.

Sure, the Republican is running for governor of Florida, while the Democrat just won an upset primary victory in Queens and the Bronx.

But the truth is that every Republican would love to run against Ocacio-Cortez as the face of the Democratic Party. She isn't, but the media coverage is building her up in a way that is making the GOP's approach far easier.

"From New York to the Heartland: Ocasio-Cortez Debuts on National Campaign Stage," a New York Times headline said the other day.

She is, of course, a self-described democratic socialist, but the press treated her recent campaign swing with Bernie Sanders as if she were a presidential front-runner. And while she's undoubtedly an exciting fresh face, that buildup has made her a big target.

But the press has largely given her a pass for making mistakes and inflammatory comments. If a Republican had come out of nowhere and knocked off a House leader, a la Dave Brat against Eric Cantor—and made these kinds of missteps—news outlets would be all over that person.

Instead, while the press has cast Ocasio-Cortez as emblematic of a split in the Democratic Party, it's been left to the Republicans to highlight her errors.

The first came in a "Firing Line" interview when Ocasio-Cortez started complaining about Israel’s "occupation" of "Palestine." When pressed, she said "I am not the expert on geopolitics on this issue." Perhaps she should study up before holding forth on foreign policy.

Calling for family reunifications is good Democratic politics. Calling for waves of protestors to take over airports is not, at least not in swing states and red states.

Thus it was that DeSantis said in a speech: "You look at this girl, Ocasio-Cortez or whatever she is, I mean, she’s in a totally different universe. It's basically socialism wrapped in ignorance. And it’s problematic." He went on to say of her Palestine remarks that Ocasio-Cortez "has no clue what she’s talking about."

The Democratic nominee fired back on Twitter, telling DeSantis "it seems you're confused as to 'whatever I am.' I am a Puerto Rican woman." Ocasio-Cortez added, "It's strange you don't know what that is, given that ~75,000 Puerto Ricans have relocated to Florida in the 10 mos since [Hurricane] María. But I’m sure these new FL voters appreciate your comments!"

Ironically, the national media, and especially the New York media, missed her rise, with the Times not even running a separate story on the primary in which she knocked off veteran congressman Joe Crowley. But since then she has been featured in endless media stories and segments.

In fairness to Ocasio-Cortez, she has become a symbol of a very real divide in the party. All the grass-roots energy is on the progressive left, and reflected in people like Elizabeth Warren, the subject of a glowing New York magazine cover story. But many Democrats are worried that the party can't win the House without offering a more moderate form of anti-Trumpism.

When "The View" is arguing about Ocasio-Cortez, with Joy Behar battling Meghan McCain over democratic socialism, it's clear that the debate is being framed around this girl—and in a way that Republicans are savoring.