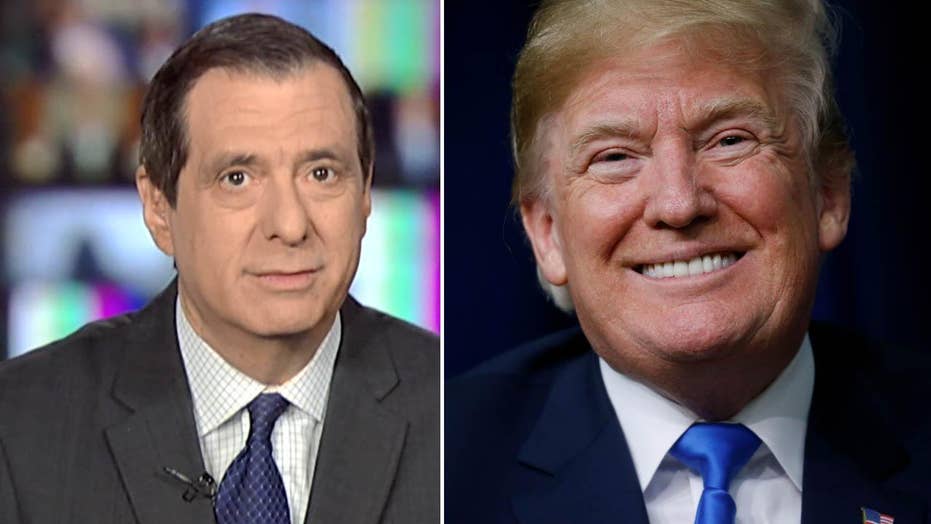 'MediaBuzz' host Howard Kurtz weighs in on argument in the New York Times that Donald Trump won the presidency because of over-exposure on cable news channels.

Ross Douthat, the consistently provocative New York Times columnist, had a personal reason for being put off by Donald Trump's prowess at dominating television.

Douthat, a conservative who is fiercely anti-Trump, was a CNN contributor during the 2016 campaign. He writes that "a network like CNN, which thrives on Team Red vs. Team Blue conflict, felt compelled to turn airtime over to Trump surrogates like Jeffrey Lord and Corey Lewandowski and Kayleigh McEnany because their regular stable of conservative commentators (I was one of them) simply wasn't pro-Trump enough."

He has a point—though those few were greatly outnumbered by never-Trumpers—but harbors some misconceptions when it comes to the president and TV news.

The backdrop for the piece is the scandal at Cambridge Analytica, the data firm that just suspended its CEO (largely over hidden-camera footage showing him and others talking about bribing potential clients with money and hookers.)

Since Cambridge worked for the Trump campaign, the column says that whatever voter data the company improperly mined is much less important than Trump’s "hacking" of television.

Douthat argues that Trump created phony news for years as the host of "The Apprentice," saying many Republican viewers "bought the fake news that his television program and its network sponsors gladly sold them."

No question the show helped cement his image as a celebrity businessman, but come on. People know that what they’re getting with these staged reality shows is hardly the unvarnished truth.

Trump's real sin, says Douthat, "was the use of his celebrity to turn news channels into infomercials for his campaign ... With television news there were actual human beings, charged with exercising news judgment and inclined to posture as civic-minded actors when it suits them, making the decision to hand day after day of free coverage to Donald Trump’s rallies, outrages, feuds and personal attacks."

Here he misses the boat. Trump dominated TV news because he knows how to drive a media agenda, and because he did hundreds and hundreds of interviews.

At a time when it was difficult for shows (including mine) to get many sitdowns with Ted Cruz, Marco Rubio and especially Jeb Bush—and when they were cautious when they did appear—Trump did all the channels even when he knew he was going to get beat up. He did Sunday shows, morning shows, nighttime shows and cable shows (including on CNN and MSNBC).

And he made news, especially by challenging the anchors and reporters, either in the moment or later on Twitter. What's more, an awful lot of his coverage was negative. And he was often at odds with Fox News then, even blowing off the network's Iowa debate.

Sure, cable news covered too many of his rallies because they were good for ratings. But that was a minor factor in his non-stop media blitz.

"The depth and breadth of Trump skepticism among right-wing pundits was a pretty solid indicator of his unfitness for high office."

Sorry, but the consensus of National Review, the Weekly Standard, Charles Krauthammer, George Will, Rich Lowry, Steve Hayes and Ross Douthat didn’t ultimately matter, because Trump was able to forge his own connection with Republican voters and disaffected Democrats. He didn’t run as a doctrinaire conservative, which cost him the backing of many conservative pundits and scrambled the usual left-right argument. But in the end that mattered more to elite opinion-makers than the working-class voters in Michigan, Wisconsin and Pennsylvania.

National Review’s Jim Geraghty, responding to Douthat, takes a much broader view beyond cable news. He notes that Trump had been on "SNL" and the "Tonight" show, in "Home Alone 2" and even popped up in Bobby Brown music videos:

"Trump had enjoyed the pop-culture and big-media seal of approval for decades!

"Television’s coverage of Donald Trump from the 1980s to early 2015 portrayed Trump as a phenomenal business success, endlessly knowledgeable and fascinating, insightful, shrewd, entertaining, and funny — a larger-than-life character. Why are so many baffled that Trump managed to turn that image into a path to the presidency?"

Two days before the election, Douthat warned that voting for Trump would install "a man who stands well outside the norms of American presidential politics, who has displayed a naked contempt for republican institutions and constitutional constraints, who deliberately injects noxious conspiracy theories into political conversation, who has tiptoed closer to the incitement of political violence than any major politician in my lifetime ..."

Perhaps that’s why the notion that television served as Trump’s infomercial service sounds more like an after-the-fact justification for a victory that that virtually all the pundits insisted would never happen.