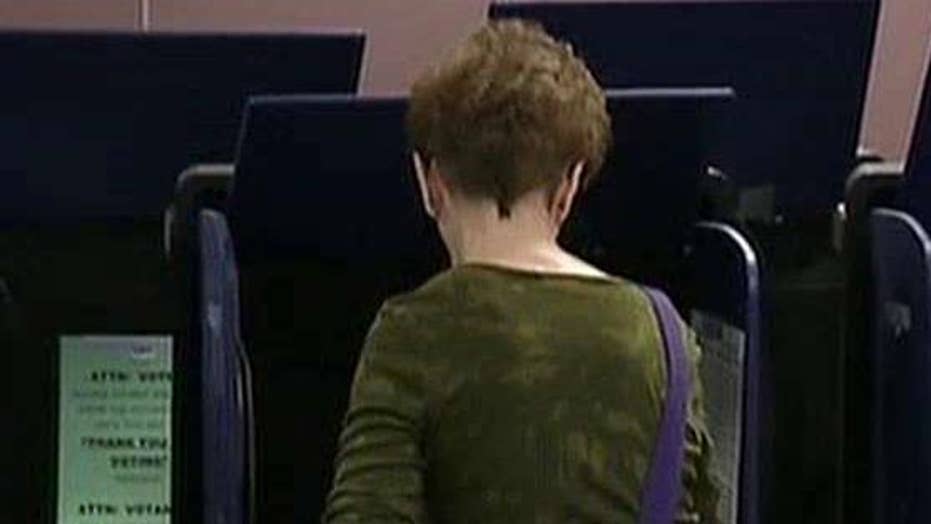 Supreme Court to rule on voter ID laws in some states

The Supreme Court, while holding back on dealing with some of the country’s most controversial issues amid the vacancy on the bench, is still scheduled to tackle some key cases in its new term that starts Monday.

Almost 40 appeals are currently on the docket. About three-dozen more are expected to be added in coming months. The caseload is usually settled by February, with the term effectively ending in late June.

Key cases already on the Supreme Court docket include:

AT ISSUE: Whether the exclusion of churches from a publicly funded aid program violates the Free Exercise and Equal Protection Clauses, if the state cannot establish a sufficiently valid Establishment Clause concern.

THE CASE: A local Christian church -- supported by the Alliance Defending Freedom -- sued after being denied Missouri state funds to improve the surface of a playground used by its preschool. The program gives grants to nonprofits seeking a safer recreational environment for children. Missouri law prohibits direct government aid to educational institutions that have a religious affiliation.

THE ARGUMENTS:  A core tenet of the First Amendment says "Congress shall make no law respecting an establishment of religion, or prohibiting the Free Exercise thereof." The state here says the church may still worship as it pleases without interference, but its constitutional rights do not extend to playgrounds. The school counters that the government has not established a "compelling" interest for selective, discretionary exclusion.

THE IMPACT:  This may be the most-watched social issue addressed in the court's early term. The tension involving church-state intersections has been especially divisive in the current court. Some commentators have equated this religious liberty dispute with same-sex marriage, arguing the court should apply equal protection rights to churches, because the Missouri law actually makes it harder to seek aid from the government for a singled-out group.

AT ISSUE: Separate appeals over what role race plays in creating voting districts.

THE CASES: Civil rights groups oppose the voting-district plan passed by the Virginia GOP-led House of Delegates, saying black voters were illegally packed into majority-black districts in a way that dilutes their voting power, boosting the prospects for GOP candidates in neighboring districts. A federal court sided with the state.

North Carolina's voting districts were also drawn by a GOP-led legislature. Federal courts have found two of the state's congressional districts were the product of an unconstitutional gerrymander based on race, and ordered new maps be drawn. The high court in February refused the state's request to block that lower court order. The revised maps were used in North Carolina's June 7 primary, but now the larger issues are back at the Supreme Court.

THE ARGUMENTS:  Officials in both states say their maps were created to give Republicans an edge, but comply with the federal Voting Rights Act and were not based on illegal racial criteria.

THE IMPACT:  The issues will not be resolved before this election, but what the court does here will dramatically affect future partisan efforts to create electoral districts that would determine the balance of power in Congress and state legislatures.

AT ISSUE:  A pair of appeals from the nation's busiest execution state, testing the use of intellectual disability and race in criminal prosecutions.

THE CASES:  Bobby James Moore's lawyers say the state is not using the current medically accepted definition of mental competency, in violation of the 8th Amendment. Moore, who murdered a grocery store clerk during a robbery, has a 70 IQ, say his lawyers. The Supreme Court initially agreed to decide a far more important companion question: whether Moore's 35-year death row incarceration was in itself "cruel and unusual punishment." But the justices without explanation rescinded that aspect of the case two hours after issuing its order.

In the separate case, Duane Buck's own trial lawyers called a psychologist to the stand, who testified Buck would be likely to be a societal threat in the future, if not put to death, because he is black. Buck, who murdered his girlfriend and another man, now challenges his legal team's effectiveness and the state's standards for allowing challenges to a jury's conclusions of a defendant's "future dangerousness."

THE ARGUMENTS:  The Supreme Court in 2002 outlawed the death penalty for the intellectually disabled, but has struggled to clarify the mix of definitions used by different states, especially whether a clean IQ benchmark standard of competency exists. Separately, the justices in recent years have also thrown out instances of prosecutorial misconduct and ineffective counsel, in a range of criminal cases, but have generally taken a case-by-case approach in determining when such behavior is so egregious that defendants deserve new trials.

THE IMPACT:  Texas has conducted nearly 540 executions since 1976, nearly five times the total of any other state. The cases come as use of capital punishment nationwide continues to shrink.

AT ISSUE:  The scope of a 1998 congressional law designed to limit the use of "acting" appointments to fill agency and board vacancies, specifically the naming of a general counsel to the NLRB.

THE CASE: An Arizona ambulance service sanctioned by the board now challenges the appointment, since the general counsel had already been nominated to the post, but the Senate had not yet acted on it.

THE ARGUMENTS: President Obama has asserted his constitutional authority to keep the government functioning when Congress refuses to do its job in a timely manner. But members of Congress counter the executive cannot do an end-run around the process, whatever the reason.

THE IMPACT:  The high court for the second time in two years will examine the limits of the president's power to fill government positions under his executive authority discretion. The justices in 2014 separately ruled Obama has limited power to make "recess" appointments when the Senate is not in active session.

AT ISSUE:   Does a key section of the federal trademark law banning "offensive" names represent an unconstitutional restraint of speech?

THE CASE:  An Oregon-based "Chinatown dance rock" band,  made up of Asian-Americans, was denied a trademark by an agency tribunal because its name -- the Slants-- was considered racially disparaging.

THE ARGUMENTS:  Section 2a of the Lanham Act excludes "scandalous, immoral, or disparaging marks." A federal court disagreed with the U.S. Patent & Trademark Office's interpretation of the law. The owners of the Washington Redskins have tried to link their parallel case -- Pro-Football, Inc. v. Blackhorse -- to the Tam appeal, but so far the justices will only address the band's claims. The franchise's trademarks were canceled after officials concluded they disparaged Native Americans.

IMPACT:  Beyond the constitutional principles at stake, these cases are also about money, and the financial stakes for well-known brands could be huge if other questionable trademarks are also banned.

THE CASES: In a search and seizure dispute, Elijah Manuel, who is black, was stopped for a traffic violation by white police officers in Illinois. He claims officers were abusive and falsely arrested him, believing a bottle of vitamins in his pocket was illegal Ecstasy.

For the other case, Miguel Angel Pena-Rodriguez was convicted of sexual harassment of two teenaged girls. Afterwards, two jurors told defense lawyers that a fellow juror made a number of racist comments about Mexicans during deliberations.

THE ARGUMENTS:  Manuel claims an individual Fourth Amendment right to be free from unreasonable seizure, which gives him the right to sue for "malicious prosecution." Pena-Rodriguez's lawyers argue jurors can be questioned after a trial is over about one of their colleague's support for a guilty verdict because of the defendant's racial or ethnic identity. The respective governments say the allegations do not rise to the level for new trials.

THE IMPACT: The court in May signaled its concern for the racial makeup of juries, ordering a new trial for a Georgia death-row inmate, concluding prosecutors intentionally kept blacks off the jury.