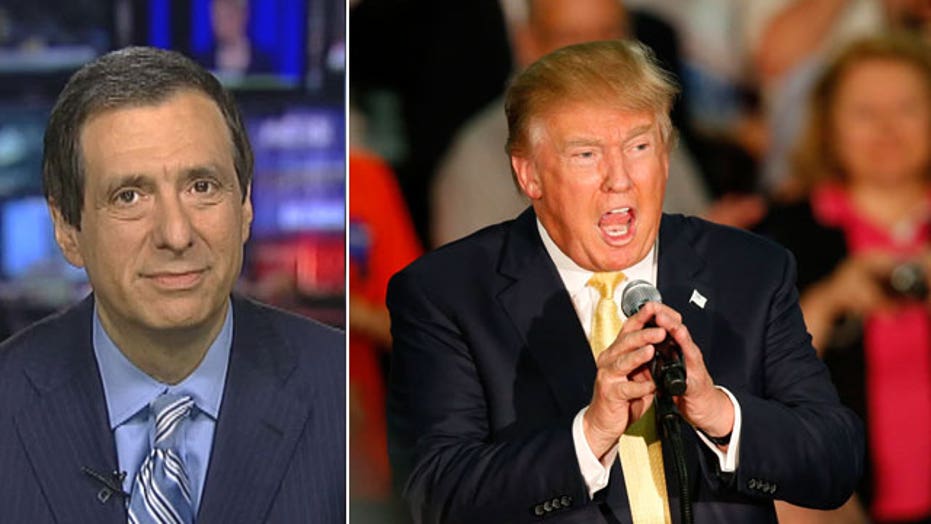 Kurtz: Donald Trump, on the defensive

Donald Trump usually stirs up a media storm by making some bombastic or fiery or insulting comment. But this time it was his silence.

Still, a prominent Democratic strategist told me yesterday that the whole furor could be pinned on the media’s “liberal bias.”

I was watching live—because almost everything Trump does is on cable news in real time—when he took the now-infamous question at a town hall meeting in New Hampshire.

After the Thursday night encounter, the story was on CNN and Fox every hour, and seemingly on MSNBC every 10 minutes. And for the first time since he jumped into the race, Trump seemed to have briefly lost control of his campaign narrative.

This has given the pundits who have never liked Trump a chance to pounce. It’s also cast a harsh spotlight on the birther rhetoric he was pushing four years ago. And it’s a self-inflicted wound.

As everyone with a television knows by now, the first questioner said the problem in this country is Muslims, adding: “We know our current president is one. You know he’s not even an American.”

Then the crazy-sounding dude asked about getting rid of Muslim training camps “where they want to kill us.”

Trump replied that “we’re going to be looking at a lot of different things. You know, a lot of people are saying that bad things are happening out there.”

In making no attempt to correct the man by saying Obama is a Christian, Trump looked like he had no problem with the falsehood.

Maybe Trump just wanted to move on by ignoring the first part of the question and answering the second. But this is the problem when your every utterance is live on the air.

Maybe it’s evidence of Trump not being a practiced politician and instinctively knowing how to handle troublemakers and hecklers.

But The Donald soon went on offense. He tweeted:

“Am I morally obligated to defend the president every time somebody says something bad or controversial about him? I don't think so!”

And: “If I would have challenged the man, the media would have accused me of interfering with that man's right of free speech. A no win situation!”

Trump read the tweets at a speech on Saturday night, and blamed the press with a last-minute blitz consisting of phone calls to “Meet the Press,” “This Week” and “State of the Union.”

On yesterday’s “Media Buzz,” Fox News contributor Joe Trippi, who managed Howard Dean’s campaign, said the media are whipping this up because they look at the GOP primaries through a liberal lens. Trump was actually helping himself, Trippi said, because polls show nearly half of Republicans believe the president is a Muslim.

I asked whether journalists have a responsibility to challenge untrue statements, but Trippi stuck to his belief that Trump was being politically astute.

The flap certainly created a belated viral moment for John McCain, whose 2008 scolding of a woman who called Obama an Arab was practically paired with the Trump video hour after hour.

At first, Trump limited himself to a brief statement: “The media wants to make this issue about Obama. The bigger issue is that Obama waging war against Christians in this country.”

Ripping the unpopular press usually works wonders for Trump. I thought it might fall flat in this case, because people could see for themselves how Trump handled the anti-Muslim guy.

I’ve since gotten an avalanche of emails and tweets saying Trump handled the incident just fine, or just ripping Obama and challenging the fact that he was born in Hawaii in 1961.

The reason this isolated incident has resonance, at least in the media’s eyes, is Trump’s 2011 flirtation with birtherism, repeatedly challenging the president to release his birth certificate (which Obama eventually did).  Trump has never renounced his actions, but he has deflected questions about it during this campaign.

When CNN’s Anderson Cooper recently asked if he believed Obama was born in the United States, Trump said: “I really don’t know…But honestly, I don’t want to get into it.”

Trump’s opponents had a field day with the Muslim moment, from Hillary Clinton to the Obama White House. Republican rivals Chris Christie, Lindsey Graham and Marco Rubio were critical as well.

Obama rightfully took heat for the ravings of the odious Rev. Jeremiah Wright, but he did attend that Christian church for two decades.

This may amount to a speed bump for Trump. But with a CNN poll, mainly reflecting the debate, showing his support softening to 24 percent and Carly Fiorina surging to 15 percent, the media will be all too happy to declare that Trump has peaked.