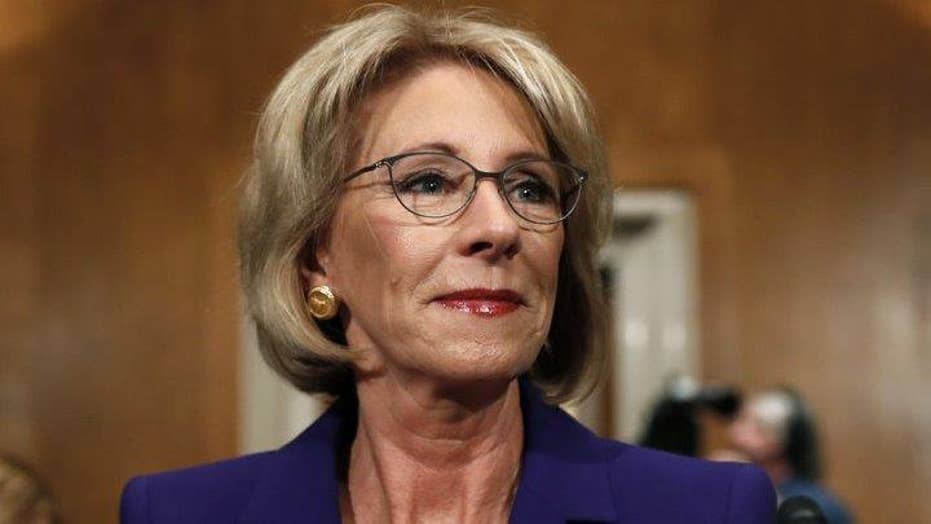 The new people in charge want to look more closely at the rights of the accused under Title IX; Kristen Fisher has more for 'Special Report'

A Texas professor and lawyer reportedly has resigned from his firm after tweeting that he’d be “ok” with Education Secretary Betsy DeVos being sexually assaulted.

Robert Ranco had posted a tweet late last week saying, “I’m not wishing for it… but I’d be ok if #BetsyDevos was sexually assaulted.”

The tweet was one of several criticizing DeVos for moving to overhaul how Title IX rules are applied to campus sex assault cases. DeVos claims those rules have led to improper investigations, though Ranco alleged she was making the world more dangerous for girls.

As reported by Campus Reform, Ranco is an adjunct professor of paralegal studies at Austin Community College and part of the Carlson Law Firm.

But according to Fox 7 in Austin, the firm’s founder Craig Carlson has announced Ranco’s resignation – after a Twitter backlash.

“I wasn’t going to make a rash decision about a member of this family just to appease people on social media. That said, I considered the health of everyone in our organization, promised my partners and my employees that we would act according to the values of our firm, and sat down to speak with Mr. Ranco,” he said in a statement, according to Fox 7.

Carlson said they concluded that “even expressing apathy towards sexual assault is [an] affront to all victims and a line that simply cannot be uncrossed.”

He said Ranco “is taking full responsibility and choosing to resign.”

In a statement to KVUE, Ranco called the tweet a “mistake.” He apologized and said he takes “full responsibility.”