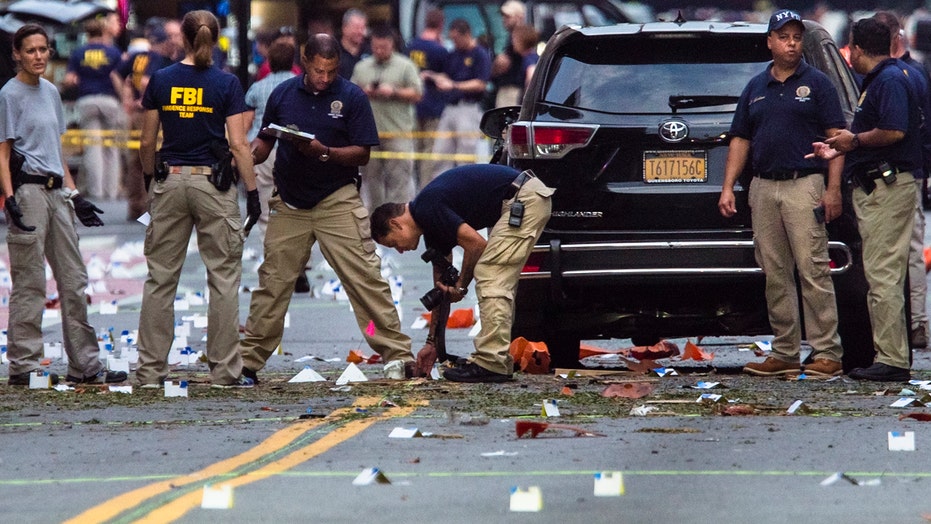 NYPD: Not actively seeking anyone else in bombings

Donald Trump and Hillary Clinton clashed sharply Monday in the wake of weekend attacks across three states that rocketed national security back to the forefront of the campaign, with the Democratic nominee accusing her opponent of giving “aid and comfort” to the enemy – and Trump saying terrorists are “praying” Clinton gets elected.

The Republican nominee, at a rally Monday afternoon in Florida, went on to say the attacks in New York City, New Jersey and Minnesota “were made possible because of our extremely open immigration system” – and accused Clinton of pushing “the most open-borders policy” of any presidential candidate in history.

The rally followed a full day of political crossfire -- as the candidates balanced statements of gratitude for the hard and effective work of law enforcement responding to the incidents with hard-edged attacks on each other’s national security credentials.

Clinton, speaking earlier in New York, said she’s the only candidate in the race who was part of the “hard decisions” to take terrorists off the battlefield.

She repeated her call for an intelligence surge, and at a separate speech in Philadelphia said the “fast-moving situation” is a “sobering reminder that we need steady leadership in a dangerous world.”

But she drew a fierce response from the Trump campaign after saying in New York that her opponent's rhetoric has been “seized on by terrorists,” and used to cast the West’s fight as a war against Islam. She cited past statements from other intelligence and counterterror officials in claiming Trump’s comments are used for recruitment -- and “the kinds of rhetoric and language that Mr. Trump has used is giving aid and comfort to our adversaries.”

Trump’s running mate, Indiana Gov. Mike Pence, responded during an interview with Rush Limbaugh, saying, “the only thing that gives comfort to our adversaries is weakness.”

He questioned whether Clinton and President Obama “know we’re at war.”

“Hillary Clinton's weakness while she was Secretary of State, has emboldened terrorists all over the world to attack the U.S., even on our own soil. They are hoping and praying that Hillary Clinton becomes President - so that they can continue their savagery and murder.”

The attacks continued Monday afternoon between the candidates’ aides, with statements and counter-statements being blasted out at a steady clip that underscored how close Election Day – seven weeks off – really is.

Trump spokesman Jason Miller called the attacks a “wakeup call,” and said: “Our enemies neither fear nor respect Hillary Clinton, and as a nation, that is dangerous, and it is disgraceful.”

He also described Clinton's earlier comments as tantamount to an accusation of “treason,” saying her remarks were “beyond the pale” and an effort to “distract from her horrible record on ISIS.”

Clinton spokesman Brian Fallon said: “For most of his campaign, Donald Trump has made dangerous and irresponsible statements that experts say play directly into the hands of ISIS and its perverse ideology.”

Amid the political war of words, authorities on Monday were able to capture suspect Ahmad Khan Rahami, who was wanted in connection with the Saturday bombing in New York's Chelsea neighborhood, as well as an explosion the same day in New Jersey’s Seaside Park and a foiled attack Sunday night near a train station in Elizabeth, N.J.

Separately, a young Somali man went on a stabbing spree in St. Cloud, Minn., over the weekend, injuring eight. The Islamic State claimed responsibility via ISIS-related media, though President Obama said that at this stage, officials see “no connection” between that attack and what happened in New York and New Jersey.

Trump, meanwhile, pointed to the incidents to renew his call for “extreme vetting” of immigrants from turbulent regions. He told Fox News’ “Fox & Friends” the threat is a “cancer from within.”