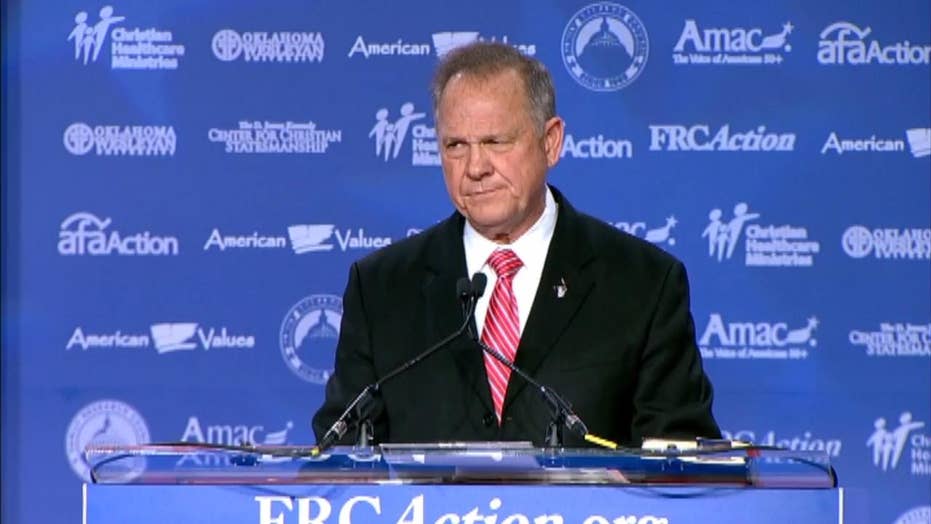 Judge Roy Moore: God has given us a window of opportunity

Alabama Republican Senate nominee Roy Moore is famous for refusing to remove a statue of the Ten Commandments from a government building but told reporters Tuesday he doesn’t support a “religious test” for officeholders.

"There should be no religious test, no. That's against the Constitution," Moore said as he met with Republican senators at the Capitol on Tuesday, according to The Hill.

Moore, the former chief justice of Alabama’s Supreme Court who is popular with Christian conservatives in the state for his fights over cultural issues, was responding to questions about his 2006 statement that Minnesota Rep. Keith Ellison, a Muslim, shouldn't be allowed to serve in Congress.

He also accused reporters of portraying him unfairly.

"Well I'm a lot different than what the Washington Post has been printing," Moore said. "I don't hate people."

Moore was removed twice from his position on Alabama's Supreme Court; first for refusing to remove the Ten Commandments monument and then again when he ordered probate judges in the state not to grant same sex marriage licenses.

On Monday, Moore waded into another divisive social issue by calling for the impeachment of the federal judge who issued an order blocking the implementation of President Trump’s ban on transgender people serving in the military.

In a statement, he said U.S. District Judge Colleen Kollar-Kotelly “should be impeached by the House of Representatives for unlawful usurpation of power” and “lack of good behavior” and should be “referred to the Senate for a vote on removal.”

Moore stated that as “recently as 2013, the American Psychiatric Association considered transgenderism to be a mental disorder.”

“The decision of a federal judge in the District of Columbia enjoining President Trump’s executive order on transgenderism in the military is absolutely ridiculous and is a perfect example of the outlandish doctrine of judicial supremacy whereby judges exalt themselves over the Constitution they are sworn to uphold,” he said.