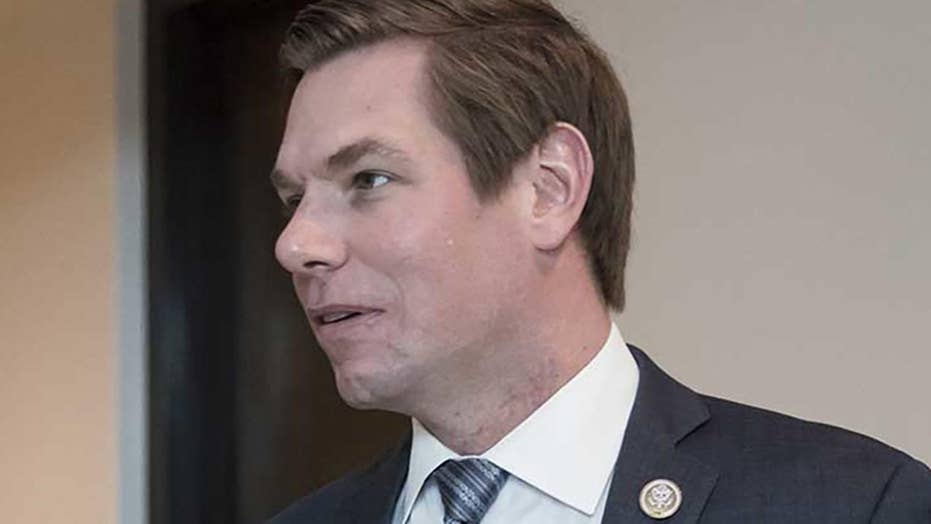 MANCHESTER, N.H. – Democratic Rep. Eric Swalwell acknowledges that if “you dish it out” on Twitter, “you better bet able to take it.”

Speaking to Fox News during a visit here Monday, the likely Democratic presidential candidate admitted he was "rightfully" schooled on social media last week after complaining about having to go to somewhere other than Trump Tower for coffee. His post quickly garnered an avalanche of reaction, including from Trump supporters who mocked Swalwell and pointed out that there were plenty of alternatives for coffee in midtown Manhattan.

SWALWELL BYPASSES COFFEE INSIDE TRUMP TOWER, TWEETS ABOUT IT

“So I was rightfully skilled about that on Twitter and that’s why I love Twitter," said Swalwell, D-Calif. "Sometimes it’s just a cathartic place to go, where you can dish it out and you better be able to take it and just move on to the next tweet.”

Last Wednesday, as he was making his way through New York City, Swalwell posted a selfie and wrote “it’s snowing in #NewYork. I need coffee. The closest cafe is inside Trump Tower. This is me walking to an alternative.”

Critics included Fox News host Laura Ingraham, who took to Twitter to mock Swalwell, saying “since you’ve been operating in “alternative” universe for years, this should be easy for you. (Try the Russian Tea Room—maybe you’ll finally find your collusion.)”

Swalwell – a former prosecutor who’s a member of the House Intelligence and Judiciary committees – has been a vocal critic of President Trump over the relationship between Trump’s 2016 presidential campaign and Russia.

Asked about the reaction he received over his coffee tweet, an amused Swalwell told Fox News on Monday, “I was in snow storm in Manhattan and was bewildered and the only coffee store around was Trump Tower.”

“Wasn’t going to go there. Didn’t know Manhattan very well," he added. "Apparently there’s like 100 other coffee shops within reach."

Swalwell’s on a two-day campaign style swing through New Hampshire – the state that holds the first primary in the race for the White House. His visit came as speculation over when special counsel Robert Mueller’s report on his investigation into Russian tampering with the 2016 election will be delivered to the attorney general was reaching fever pitch, with some reports that the findings come be handed over as early as this week.

Swalwell on Monday predicted a bombshell in the report.

“I expect you’re going to see that there has been criminal conduct by the administration to obstruct and keep the investigators from finding out what happened,” the told reporters.

“When it comes to collusion, I don’t know.”

Swalwell said once Mueller’s investigation is over, the House Intelligence Committee will “go back to work to fill in the gaps where they may exist because again, the Mueller team can only tell us what they can prove beyond a reasonable doubt. If there’s information that we need to secure for future elections or to make sure the rule of law is standing when it comes to abuses of power or obstruction of justice, we’ll work on that.”

Donald Trump Jr. dismissed any notion that he, the President or his family have any fears relating to the Mueller investigation or a probe by the Southern District of New York.

“‘This is going to be it, we finally got him.’ I’ve been hearing this for two years,’” Trump Jr. told “Fox & Friends" on Monday morning.

COHEN TO TESTIFY IN FRONT OF CONGRESS

The president’s former longtime attorney and fixer Michael Cohen testifies publicly on Wednesday before the House Oversight Committee. Later in the week Cohen – who pleaded guilty to lying to Congress last year about Trump's knowledge of a proposed Trump Tower project in Moscow during the campaign – testifies behind closed doors in front of the House and Senate Intelligence Committees.

“I look forward to seeing Michael Cohen. He lied to us last time he came in and plead guilty to that so I’m excited to hear that he wasn’t to come clean but there’s going to be tough questions about what he saw, what he did, and what his boss as businessman, as a candidate, and as a president, did,” Swalwell said.

SWALWELL SAYS RICH 'GETTING OFF THE HOOK'

Swalwell took questions from reporters after headlining "Politics and Eggs," a must stop for White House hopefuls.

The 38-year old four-term congressman – who was making his fourth trip to New Hampshire since early November - told Fox News he’ll make his decision on a presidential bid soon.

“In between his busy schedule of cable TV interviews, Eric Swalwell is back in New Hampshire as he mulls his all-but-certain Presidential bid. But instead of offering up policies that would benefit Granite Staters, Swalwell is focused solely on obstructing President Trump's pursuit of progress.  Resistance is not a winning platform in New Hampshire or for 2020." RNC spokeswoman Mandi Merritt said.

And he’s sounding more and more like a candidate, saying, “I feel very connected every day Americans, being someone who was the first in my family to go to college, having student loan debt myself, and having two kids under two and seeing what that means for just working hard and wanting it to mean something. I think that’s a candidacy that’s unique and I’m close to making a decision.”

But Swalwell –who would be a very long shot to win the Democratic nomination – pushed back against suggestions he would use a 2020 campaign to try and line up a spot as running mate.

“I’m doing this because I think I can win. Not to sell a book, not for any other job,” he answered.