Sen. Susan Collins is speaking out on the threats she received during the Brett Kavanaugh confirmation process, sharing with Fox News some of the vulgar, vitriolic and sexist voicemails her office received from callers during that period.

The Maine Republican senator, who provided a critical “yea” vote in favor of the now-Supreme Court justice, discussed the experience in an exclusive interview with Fox News’ Martha MacCallum.

While Collins was under tremendous political pressure from both sides during the confirmation process, her office also was receiving disturbing threats.

In one voicemail, the caller warned that if she voted for Kavanaugh – who faced multiple sexual assault and misconduct allegations which he denied – she would be a “feckless woman” letting President Trump and his appointees “steal health care from millions.”

The caller then unleashed on Collins: “You are so f---ing naïve. You will go down in history as the most naïve person ever to be in Congress. You f---ing, f---ing feckless naïve woman. Trying to make Americans more equal. F--- you.” 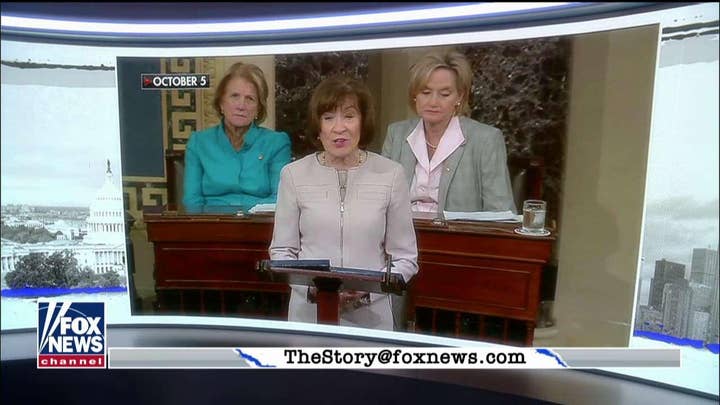 Collins, throughout it all, kept her decision close to the vest, until a dramatic floor speech in October announcing her intention to vote for Kavanaugh. Along with the support of Democratic Sen. Joe Manchin and others, it was enough to confirm the nominee.

In her speech, Collins said the confirmation had resembled a "caricature of a gutter-level political campaign" and criticized Democrats for announcing their opposition to Kavanaugh before his name was even announced. She also criticized outside groups for distorting Kavanaugh's record and "over-the-top rhetoric."

Afterward, the senator's family had a scare when a hazardous materials team was called to her Bangor, Maine home in response to a threatening letter containing what its author said was ricin. An FBI spokeswoman later told The Associated Press preliminary tests indicated no threat to the public.

Collins has since become a top political target for Democrats looking to unseat her in 2020.

Leah Greenberg, with Indivisible, told The Hill that Collins “gravely damaged her reputation in Maine,” calling her speech that day a “slap in the face.”

Her Republican colleagues, though, applauded her. “I think [Collins] saved the Senate and the judiciary from sliding into the abyss,” Sen. Lindsey Graham, R-S.C., said in an interview with Fox News at the time.