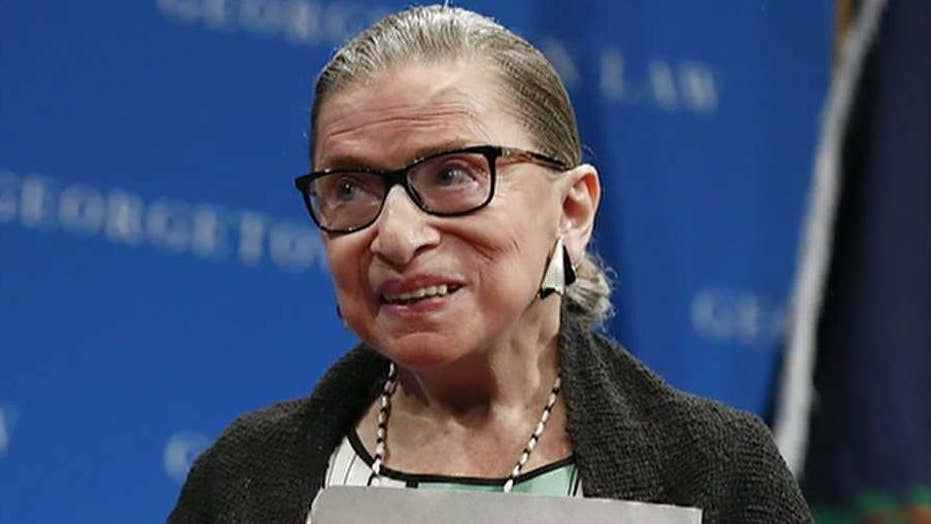 "The tumor was treated definitively and there is no evidence of disease elsewhere in the body," a Court spokesperson said in a statement. "Justice Ginsburg will continue to have periodic blood tests and scans. No further treatment is needed at this time."

An abnormality was detected in early July during a routine blood test, and a subsequent biopsy revealed the tumor.

RUTH BADER GINSBURG SAYS SHE IS 'VERY MUCH ALIVE,' UNLIKE SENATOR WHO SAID SHE'D BE 'DEAD WITHIN SIX MONTHS'

Ginsburg, 86, began radiation on Aug. 5 at Memorial Sloan Kettering Cancer Center in New York and received treatment as an outpatient, the statement said. As part of her treatment, a bile duct stent was placed on her pancreas.

"The Justice tolerated treatment well," the statement said. "She canceled her annual summer visit to Santa Fe, but has otherwise maintained an active schedule."

Earlier this month, Ginsburg attended a showing of Fiddler on the Roof in New York City, where she received a standing ovation.

Sources tell Fox News that Ginsburg has no desire to step down from the bench and plans to hold her seat for as long as her health permits.

The new Supreme Court term is scheduled to begin on Oct. 7 and justices usually return to work in September. So far, Ginsburg has 11 public events planned for September and has not canceled any of them to date, according to NPR.

Ginsburg underwent lung cancer surgery in December and has had two previous bouts with cancer. She had colorectal cancer in 1999 and pancreatic cancer in 2009. While recovering from surgery she missed arguments at the court in January, her first illness-related absence in more than 25 years as a justice.

Fox News' Bill Mears and Shannon Bream and The Associated Press contributed to this report.