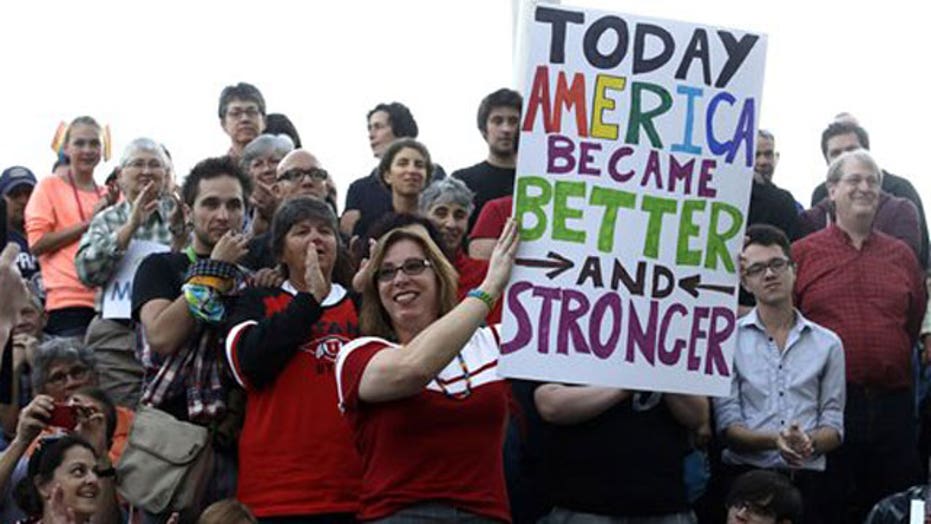 The Supreme Court on Monday turned away appeals from five states looking to prohibit gay marriage, effectively legalizing same-sex marriage in those states and likely others -- but also leaving the issue unresolved nationally.

The justices rejected appeals from Indiana, Oklahoma, Utah, Virginia and Wisconsin. The court's order immediately ends delays on gay marriage in those states.

Couples in six other states -- Colorado, Kansas, North Carolina, South Carolina, West Virginia and Wyoming -- also should be able to get married in short order. Those states would be bound by the same appellate rulings that were put on hold pending the Supreme Court's review. That would make same-sex marriage legal in 30 states and the District of Columbia.

In Utah, Gov. Gary Herbert said he was "surprised" and "disappointed" by Monday's development. But the Republican governor said that "while I continue to believe that the states do have the right to define marriage and create laws regarding marriage, ultimately we are a nation of laws, and we here in Utah will uphold the law."

With no other state cases currently pending before the court, the decision to reject the appeals means the justices -- for now -- will not be considering the question of same-sex marriage nationwide.

Experts and advocates on both sides of the issue believed the justices would step in and decide gay marriage cases this term. The justices have an obligation to settle an issue of such national importance, not abdicate that responsibility to lower court judges, the advocates said. Opting out of hearing the cases leaves those lower court rulings in place.

Evan Wolfson, president of Freedom to Marry, called on the high court to "finish the job." Wolfson said the court's "delay in affirming the freedom to marry nationwide prolongs the patchwork of state-to-state discrimination and the harms and indignity that the denial of marriage still inflicts on too many couples in too many places."

Ed Whelan of the Ethics and Public Policy Center, an opponent of same-sex marriage, also chastised the court for its "irresponsible denial of review in the cases."

However, several other lower-court cases still are percolating and eventually could make their way to the Supreme Court.

Two other appeals courts, in Cincinnati and San Francisco, could issue decisions any time in same-sex marriage cases. Judges in the Cincinnati-based 6th Circuit who are weighing pro-gay marriage rulings in Kentucky, Michigan, Ohio and Tennessee, appeared more likely to rule in favor of state bans than did the 9th Circuit judges in San Francisco, who are considering Idaho and Nevada restrictions on marriage.

The situation, meanwhile, was changing rapidly Monday in the states affected by the court's latest announcement:

-- Wisconsin Gov. Scott Walker, a Republican, said the fight against same-sex marriage "is over" in Wisconsin. "With the Supreme Court's announcement today, it is clear that the position of the court of appeals at the federal level is the law of the land and we're going to go forward enacting it."

-- Virginia Attorney General Mark Herring, a Democrat, said marriage licenses could start to be issued to same-sex couples as early as Monday afternoon.

-- In North Carolina, lawyers for same-sex couples said they planned to ask a judge Monday to overturn the state's gay marriage ban.

-- In Oklahoma, the clerk in the largest county said he would await a formal order from the Denver-based 10th U.S. Circuit Court of Appeals before he begins issuing marriage licenses to same-sex couples. That court had placed its ruling striking down the state ban on hold.

It takes just four of the nine justices to vote to hear a case, but it takes a majority of at least five for an eventual ruling. Monday's opaque order did not indicate how the justices voted on whether to hear the appeals.