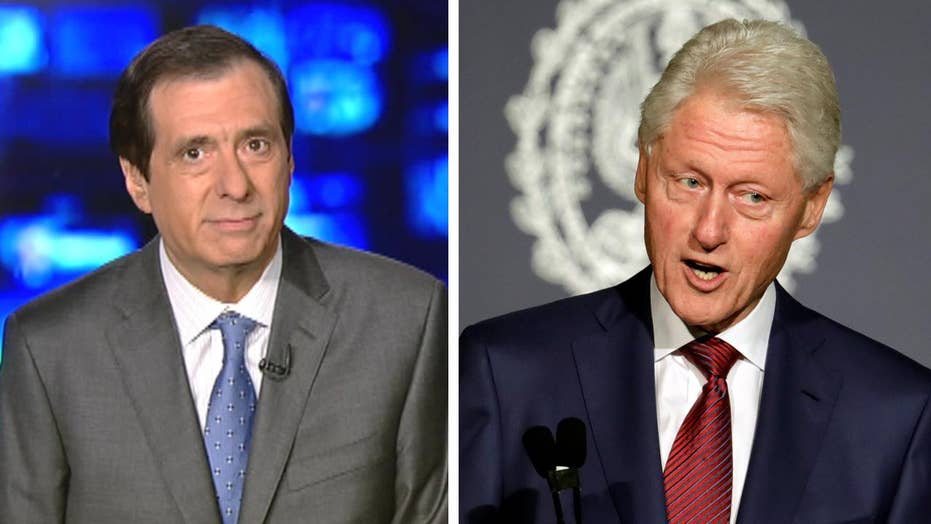 Kurtz: Did liberals cover for Clinton in the 90's?

'MediaBuzz' host Howard Kurtz weighs in on the renewed interest by liberal commentators in looking back on Bill Clinton's sex controversies of the 1990s.

When Jeff Sessions testified on the Hill yesterday, he was grilled about the Justice Department's disclosure that it may seek a special counsel to investigate Hillary Clinton.

Was it political retribution? Perhaps there should be a probe of whether donations to the Clinton Foundation were tied to a 2010 Obama administration decision, in which Clinton participated, to allow a Russian agency to buy a company that had uranium rights in America.

But after President Trump repeatedly urged such an investigation, critics say that naming a prosecutor would undermine DOJ’s independence. The attorney general said the decision would not be made on political grounds.

There is, at the moment, another drive under way to look back at Clinton — in this case, Bill Clinton.

In light of the intense focus on sexual assault and harassment allegations involving Roy Moore, Harvey Weinstein, Kevin Spacey, Louis C.K., business leaders and prominent journalists, the question arises: What about Bubba? And that question is being posed by liberal commentators.

Having covered all the Clinton sex controversies, it's generally not true that the mainstream media gave the 42nd president a pass. The Washington Post investigated the Paula Jones story and broke the news about the Monica Lewinsky probe. Kathleen Willey appeared on "60 Minutes." The Post and Wall Street Journal reported on Juanita Broaddrick, although NBC held an interview with her until after Clinton was acquitted at his Senate impeachment trial.

But a number of liberals defended Clinton during the 1990s against the allegations, blaming them on what Hillary famously called a "vast right-wing conspiracy."

Chris Hayes, the liberal prime-time host on MSNBC, tweeted the other day: "As gross and cynical and hypocritical as the right’s 'what about Bill Clinton' stuff is, it’s also true that Democrats and the center left are overdue for a real reckoning with the allegations against him."

In a piece called "The Reckoning," Atlantic contributing editor Caitlin Flanagan wrote Monday that we should "not forget the sex crimes" of which "Bill Clinton was very credibly accused in the 1990s. Juanita Broaddrick reported that when she was a volunteer on one of his gubernatorial campaigns, she had arranged to meet him in a hotel coffee shop. At the last minute, he had changed the location to her room in the hotel, where she says he very violently raped her. She said she fought against Clinton throughout a rape that left her bloodied.

At a different Arkansas hotel, he caught sight of a minor state employee named Paula Jones, and, Jones says, he sent a couple of state troopers to invite her to his suite, where he exposed his penis to her and told her to kiss it. Kathleen Willey said that she met him in the Oval Office for personal and professional advice and that he groped her, rubbed his erect penis on her, and pushed her hand to his crotch.

"It was a pattern of behavior; it included an alleged violent assault; the women involved had far more credible evidence than many of the most notorious accusations that have come to light in the past five weeks. But Clinton was not left to the swift and pitiless justice that today’s accused men have experienced. Rather, he was rescued by a surprising force: machine feminism."

As Exhibit A, Flanagan points to this 1998 New York Times op-ed by feminist leader Gloria Steinem.

If the allegations were true, Steinem wrote, "President Clinton may be a candidate for sex addiction therapy. But feminists will still have been right to resist pressure by the right wing and the media to call for his resignation or impeachment."

On Kathleen Willey’s tale of Oval Office groping, Steinem said: "Even if the allegations are true, the president is not guilty of sexual harassment. He is accused of having made a gross, dumb, and reckless pass at a supporter during a low point in her life. She pushed him away, she said, and it never happened again. In other words, President Clinton took 'no' for an answer."

In the case of Paula Jones, "Mr. Clinton seems to have made a clumsy sexual pass, then accepted rejection." His relationship with Lewinsky, despite the "power imbalance," was not coerced.

And he should stay in office, writes Steinem, because he was "vital" to "reproductive freedom."

New York Times liberal columnist Michelle Goldberg now writes that she believes Juanita Broaddrick, that revisiting the Clinton scandals is "painful," and that "Democrats are guilty of apologizing for Clinton when they shouldn’t have."

With a lament that Hillary had to pay the price for Bill’s misdeeds, Goldberg says:

"It's fair to conclude that because of Broaddrick's allegations, Bill Clinton no longer has a place in decent society."

In the cauldron of impeachment politics, some liberals were as wedded to defending Clinton despite the mounting evidence as some conservatives today are to defending Roy Moore.

But there is a defend-our-guy-at-all-costs mentality in such cases that at least some liberals are belatedly attempting to confront.

Footnote: Sessions, whose old Senate seat is at stake in the Roy Moore race, made no attempt to defend his fellow Alabamian at yesterday’s hearing. "I have no reason to doubt these women," he said.