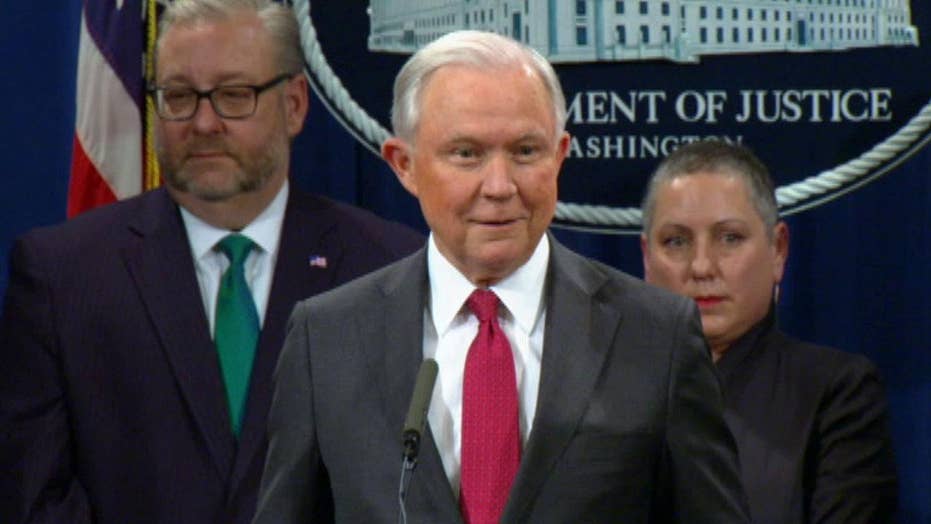 Jeff Sessions 'pleased and honored' to be attorney general

Attorney General Jeff Sessions backed the Chicago Police Department Friday in the face of a proposed plan to overhaul it, saying that “police are not the problem, criminals are the problem.”

Sessions addressed the Chicago Crime Commission, and criticized a plan negotiated between Chicago and the state of Illinois to overhaul the city's 12,000-member police force under court supervision. The plan came after Officer Jason Van Dyke was convicted of second-degree murder for shooting teenager Laquan McDonald.

But Sessions told the audience that his conviction showed that the system worked and that rogue officers will be prosecuted and jailed. Instead, he said, Chicago police are the solution to the city’s gun violence problem.

He called the consent decree plan “seductive” but said it was vague and would direct valuable resources away from areas that could use the money to hire or train more officers. He also said it would rob the people of Chicago of their say in the police system since it would not be accountable to the people. He also pointed to initiatives taken by his Justice Department, including the formation of a gun crime prosecutions team that would focus on gun violence.

Sessions, who has come under frequent fire from President Trump for his decision last year to recuse himself from the Russia probe, has long been an advocate for tougher immigration laws and a stronger stance on law and order -- two issues that resonate with Trump’s base. Trump had announced earlier this month that he would send Sessions to Chicago to deal with the problem of gun violence in the city.

In his speech, he said that Chicago’s rise in crime in 2016 was the result of a 2015 agreement with the American Civil Liberties Union (ACLU) that required officers to conduct additional procedures and documentation for street stops. Sessions called it  “an error of monumental proportions” and said it led to fewer arrests and more crime.

"As a result of the agreement, that same year, 2016, Chicago saw the biggest single-year increase in murders since we’ve had reliable statistics --which is over 60 years," he said.

Sessions also said that Chicago's crime problem  "was exacerbated by extreme 'sanctuary city' policies that protect illegal alien criminals from deportation." He urged Chicago not to "capitulate" to criminals and told them to back their police in order to reverse the trend of violence.

"Again, the police are not the problem," he added. "The criminals are the problem."