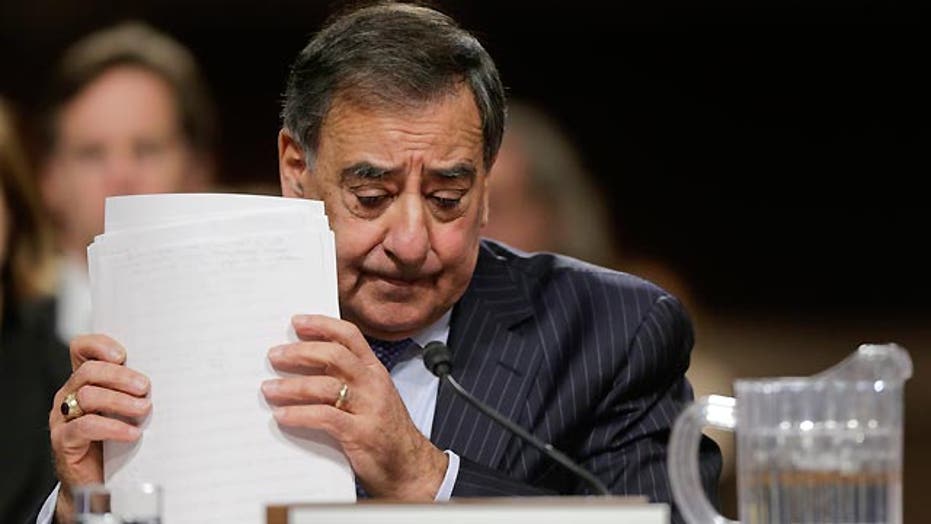 What did outgoing Defense secretary tell Senate panel about attack?

The top two Defense Department officials were sharply challenged by lawmakers Thursday on their insistent claims that nothing more could have been done to save the four Americans who were killed in the Sept. 11 terror attack in Benghazi.

Secretary Leon Panetta and Joint Chiefs Chairman Gen. Martin Dempsey were peppered with questions from Republican senators during a hearing before the Senate Armed Services Committee. The officials claimed military aircraft and other assets were too far away to get to the scene in time, and suggested armed aircraft like F16s could have done more harm than good in a chaotic situation. The senators, though, pressed the officials for a fuller explanation on why military assets were not deployed to rescue Americans under attack that night -- in what will likely be their last chance to question the outgoing Defense secretary.

Sen. John McCain, R-Ariz., disputed testimony that the difficulty in dispatching assets to the scene was "a problem of distance and time." He suggested the "light footprint" in the region and a failure to respond to threats left the military ill-prepared.

"For you to testify that our posture would not allow a rapid response -- our posture was not there because we didn't take into account the threats to that consulate, and that's why four Americans died," he said. "We could have placed forces there. We could have had aircraft and other capacity a short distance away."

He continued: "No forces arrived there until well after these murders took place."

Dempsey acknowledged having gotten word of a warning from the U.S. consulate about being unable to withstand a sustained attack, but said the military never got a request for support from the State Department.

"So it's the State Department's fault?" McCain asked, curtly.

McCain responded: "Who would you blame?"

Dempsey went on to claim that several U.S. posts were facing significant threats, though McCain said none so much as Benghazi.

Shortly afterward, Sen. Lindsey Graham, R-S.C., pressed Panetta again on why no forces were deployed until after the attack was over. Dempsey and Panetta said they talked to President Obama one time that night, but Graham questioned why there weren't subsequent follow-up conversations.

"It lasted almost eight hours ... did the president show any curiosity?" Graham asked.

Panetta said there was "no question" Obama "was concerned about American lives."

"With all due respect," Graham responded, "I don't believe that's a credible statement if he never called and asked you, 'are we helping these people?'"

The secretary's testimony on Benghazi was long-sought by Republican lawmakers. After then-Secretary of State Hillary Clinton testified last month, Graham had demanded that Panetta be brought before the Senate -- threatening to hold up the nomination of his prospective replacement Chuck Hagel over the issue.

Responding to long-running questions about whether more military assets could have been dispatched to protect those under fire in Libya on Sept. 11, Panetta in his opening statement claimed there simply wasn't enough time to do more.

"There was not enough time given the speed of the attack for armed military assets to respond," he said before the Senate Armed Services Committee. "We were not dealing with a prolonged or continuous assault which could have been brought to an end by a U.S. military response. ... Time, distance, the lack of an adequate warning, events that moved very quickly on the ground prevented a more immediate response."

Still, he said the Pentagon "spared no effort ... to save American lives."

Panetta was testifying in what may be his final public appearance on Capitol Hill as he prepares to leave the department.

Panetta, in his testimony, detailed the military response on the day and night of the attack.

As Fox News has previously reported, he said an unarmed, unmanned drone was positioned overhead the Benghazi compound.

But he said armed aircraft like AC-130 gunships would have taken too long to get there -- "at least nine to 12 hours if not more to deploy."

"This was, pure and simple ... a problem of distance and time," he said.

As for what was happening in Libya, he claimed the "quickest response" was the Tripoli-based team of six people which was sent to Benghazi.

"Members of this team, along with others at the annex facility, provided emergency medical assistance and supported the evacuation of all personnel. Only 12 hours after the attacks had begun, all remaining U.S. government personnel had been safely evacuated from Benghazi," he said.

Since the September assault, some have questioned whether enough was done to protect those at the consulate and CIA annex in Benghazi. Four Americans, including U.S. Ambassador Chris Stevens, were killed that night.

There have been questions about the perceived delays CIA officials -- stationed in Benghazi -- encountered that night and their frustration that air support was not sent from nearby Sigonella air base. In recent weeks, Fox News has learned that the rescue unit that left Tripoli was told that air support would be above when they landed in Benghazi, but it wasn't.