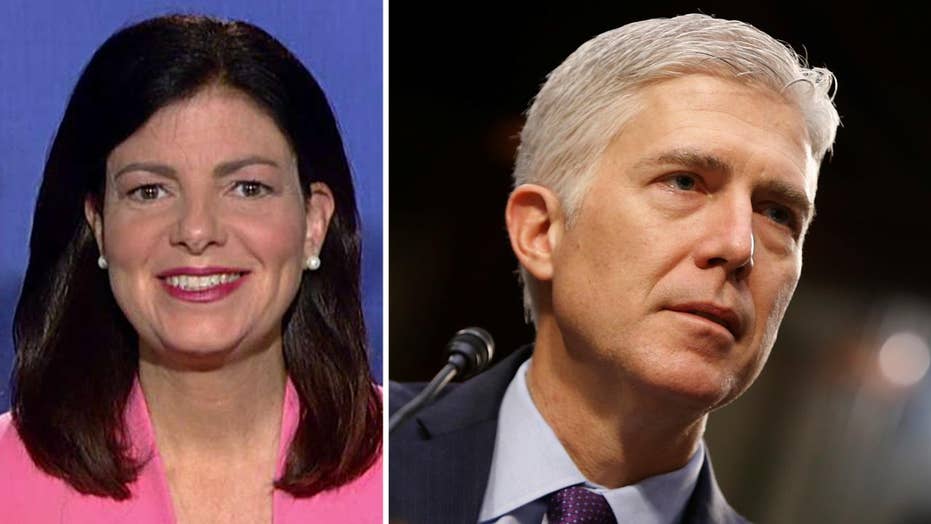 Ayotte on going nuclear on Gorsuch: Dems left us no choice

Senate Republicans vowed President Trump’s Supreme Court nominee Neil Gorsuch would be confirmed by Friday at midnight no matter what. But the road to get there – a Democratic filibuster, followed by Republicans taking the “nuclear” route – has lawmakers on both sides of the aisle agreeing it could hurt the chamber.

With 52 Republicans and 48 Democrats in the chamber, the majority party needed eight Democrats to join them to break a filibuster, which takes 60 votes, but they have only managed to scrounge up four Democratic senators to cross party lines. This means their only option is going “nuclear” – to change current Senate procedure by lowering the threshold to push Gorsuch through to confirmation on a simple majority.

“Gorsuch is going to be on the Supreme Court by midnight Friday night—I can assure you that,” Sen. Chuck Grassley, R-Iowa told Fox News’ “The First 100 Days” Monday. “One way or the other, he’s going to get the necessary votes to get there.”

But there is bipartisan consensus that the drama playing out Thursday is not ideal. Here's what senators have to say:

Schumer also warned that if Majority Leader Mitch McConnell changes Senate rules, he would be “erasing the last shred of bipartisanship in the Senate confirmation process.”

“It was heartbreaking because it seemed to me that the uniqueness of the Senate had been irreparably damaged, and along with it, any hope of restoring meaningful bipartisanship,” McCain said on the Senate floor Wednesday, expressing his doubts on voting to, yet again, change the precedent. “I will do so with great reluctance—not because I have any doubts that Judge Gorsuch will be an excellent Justice, but because of the further damage, perhaps irreparable, it will do to the Senate.”

McCain added, “Now that we are entering into an era where a simple majority decides all judicial nominations –we will see more and more nominees from the extremes of both the left and the right. I do not see how that will ensure a fair and impartial judiciary.”

I’ll vote to change rules w/ great reluctance – not b/c I doubt Judge Gorsuch, but b/c of irreparable damage it will do to Senate. pic.twitter.com/sHOhLqDJc3

Merkley, who spoke on the floor for almost 16 hours this week, said on MSNBC:

“There’s a number of ideas that have been put forward that could be considered,” Merkley said. “Let’s find a way not to both destroy the integrity of the Senate and fracture the court.”

Some much-needed fuel from @maziehirono after returning from the Senate floor for nearly 16 hours to #StopGorsuch. Thank you!!! pic.twitter.com/geiCQr4llg

Sen. Murkowski said on the Senate floor that she believed in the “traditions of the Senate,” but said “it’s not the tradition of the Senate to filibuster a Supreme Court nominee.”

In a Senate Democrats' press availability on Tuesday, Blumenthal said the nuclear option is “avoidable.”

“There’s a reason they call it the nuclear option, and that is that there’s fallout—and this fallout will be dangerously and perhaps disastrously radioactive for the Senate in years to come,” Blumenthal said, adding that to eliminate the 60-vote threshold would be a disaster for “not only the United States Senate, but for the court itself because it will drag it into the muck and mire of partisanship that has been so repugnant to the majority of American people.”

Collins said this week that the rules change was “clearly” going to happen.

“If it’s necessary in order to get him confirmed, I may have to vote that way,” Collins said. “But I certainly don’t want to.”

“One of my concerns is it makes it more likely that presidents will submit more ideological choices. And I don’t think that’s good for the court,” Collins said this week.

In a statement this week, Leahy announced that he would not vote to advance Gorsuch’s nomination.

“I fear the Senate I would be defending no longer exists,” Leahy said. “I have often said that the Senate, at its best, can be the conscience of the Nation—I must now vote my conscience,” he said, adding that “my conscience will not allow me to ratify the Majority Leader’s actions.”