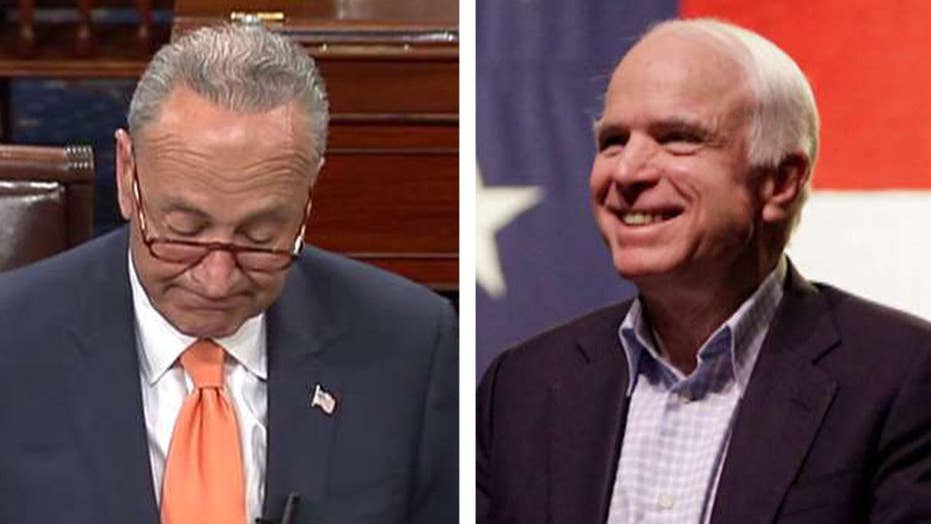 Schumer: I propose we rename Russell Building after McCain

In a rare show of bipartisanship, John McCain’s colleagues paid tribute to the late lawmaker and his legacy Monday on the Senate floor as leaders from both parties fondly recalled the Arizona Republican’s fighting spirit and unwavering dedication to the United States.

In his speech before the Senate, Majority Leader Mitch McConnell, R-Ky., recalled how a “scrappy pilot” who barely graduated from the U.S. Naval Academy became a decorated war hero and one of Washington’s most respected leaders.

“America will miss her dedicated son, her stalwart champion, her elder statesman,” McConnell said as McCain’s desk on the Senate floor sat draped in black cloth and adorned with vase of white flowers.

Sen. Jeff Flake, R-Ariz., who called himself "the other senator from Arizona," said during his time on the floor that it would serve the country well if people acted more like McCain.

"We owe it to his memory to be more like him," Flake said. "We would do well to honor him by emulating his example."

Senate Minority Leader Chuck Schumer, D-N.Y., joked that he and McCain did not get along when Schumer first entered the Senate, but that the two formed a lasting friendship working to pass immigration reform.

Schumer also cited McCain’s bravery and dedication to the armed forces, before calling on lawmakers to rename the Russell Senate Office Building in Washington after the late lawmaker. The Russell Building currently houses the Senate Armed Services Committee offices.

“John’s dedication to the country and to the men and women who served it was unwavering,” Schumer said. “His life is a story of American heroism personified.”

Senate Rules Committee Chairman Roy Blunt, R-Mo., said he was open to a proposal to rename the building, saying lawmakers should discuss it. Such a proposal would go through his panel for consideration.

Public viewings will be held at the Arizona Capitol on Wednesday and the U.S. Capitol on Friday, where he will lay in state before being buried at the Naval Academy Cemetery in Annapolis, Md., on Sunday.

“John McCain has fought his last battle and cast his last vote,” McConnell said. “But the nation that he loved is not done with him yet.” 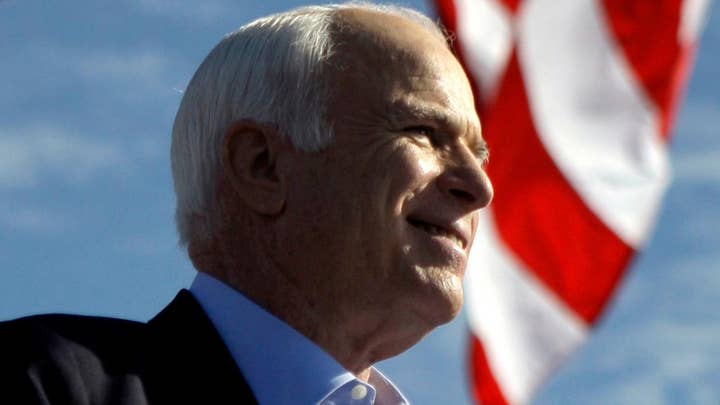 Former Vice President Joe Biden will pay tribute at a Thursday service at North Phoenix Baptist Church. The service is set to include choir performances and a bagpiper as well.

Former Presidents George W. Bush and Barack Obama will speak at a Saturday memorial service at Washington National Cathedral. The program also includes a tribute from McCain's daughter Meghan, plus a performance of "Danny Boy" by opera star Renée Fleming.

President Trump on Monday issued a statement acknowledging that he and McCain had vast differences but adding that he respected the senator's "service to our country" and signed a proclamation to fly the U.S. flag at half-staff until his burial.

The flag atop the White House flew at half-staff over the weekend but was raised Monday and then lowered again amid criticism.

Trump and McCain have feuded for years. Trump tweeted about McCain after his death Saturday but has passed up several chances to speak publicly on the Arizona senator.

Trump added in his statement that he asked Vice President Mike Pence to speak at a ceremony honoring McCain at the Capitol on Friday and agreed to the McCain family's request for military transportation of McCain's remains from Arizona to Washington.