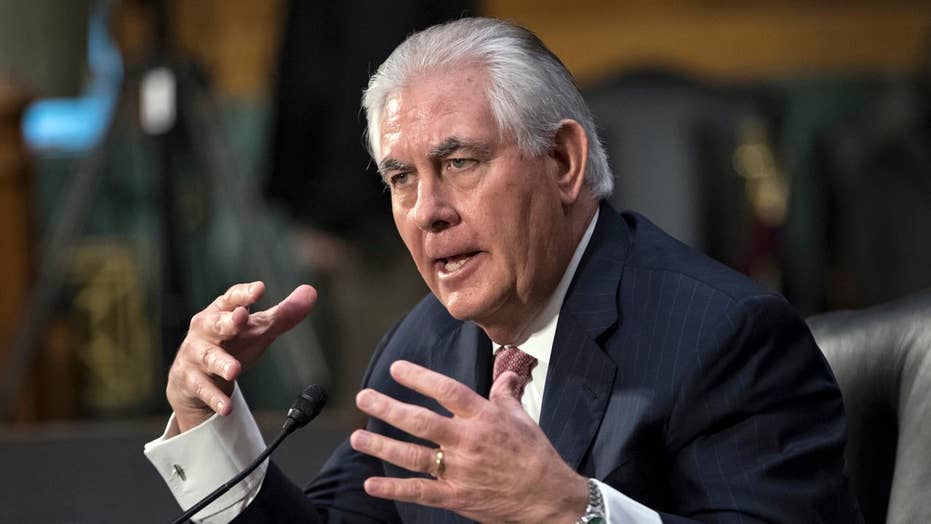 Rex Tillerson confirmed as next secretary of state

The Senate on Wednesday confirmed Rex Tillerson as secretary of State, as part of a fast-paced day for majority Republicans who also pushed past Democratic resistance to advance three other President Trump Cabinet picks to a final vote.

The vote to confirm the former ExxonMobil executive as the country's top diplomat was 56-43.

Trump, during Tillerson's swearing in in the Oval Office, said that it is "time to bring a clear-eyed focus to foreign affairs." He also praised Tillerson's background, telling him, "Your whole life has prepared you for this moment."

Earlier in the day, Senate Republicans, frustrated by Democrats’ attempts to delay other Cabinet confirmations, moved swiftly to advance three nominees to a final vote.

On the most contentious nomination, the Senate Judiciary Committee voted along party lines, 11-to-9, to approve Sen. Jeff Sessions, R-Ala., for U.S. attorney general.

The move came after Democrats dragged out proceedings a day earlier. The committee advanced Sessions to the floor on an 11-9 vote.

“No doubt we have the votes” to confirm Sessions, said Sen. Mike Lee, R-Utah, a committee member. “It’s going to get done.”

Senate Democrats have attempted to hold up several of Trump’s Cabinet picks over concerns about their records, as well as Trump's new policies and recent executive orders on immigration.

Also on Wednesday, the Republican-led Senate Finance Committee sidestepped Senate Democrats' efforts to slow Trump’s picks for secretaries of Treasury and Health and Human Services by boycotting the votes.

Committee Chairman Orrin Hatch, R-Utah, suspended committee rules on the number of members required to vote, to allow Republican members to vote in favor of Steve Mnuchin as Treasury secretary and Rep. Tom Price, R-Ga., to serve as Health and Human Services secretary.

“What you had was a rump group that met in violation of Democratic values to confirm two ethically-challenged nominees,” he told Fox News. “There’s no question about that.”

Mnuchin, Price and Sessions will almost certainly get the required simple majority needed for confirmation because Republicans have 52 senators and Democrats have 48.

Senate Environment and Public Works Committee rules require at least two members of the minority party be present for a vote to be held.

Committee Chairman John Barrasso, R-Wyo., called the move “political theatre” and vowed to "do what is necessary" to advance Pruitt's nomination, raising the possibility the GOP majority may seek a rules change like the one Hatch got to push a vote before the full Senate.

Republicans created their own challenges Wednesday toward confirming Besty DeVos as Education secretary.

That would create a 50-to-50 tied. But Republicans remain optimistic, considering GOP Vice President Mike Pence would cast the deciding vote in favor of DeVos.

On Tuesday, Democrats had refused to attend the meeting to consider Mnuchin and Price, demanding more information about the nominees.

Hatch called the Democrats’ decision to boycott the vote “the most pathetic thing.”

The rule requires at least one Democrat be present for a vote. With the rules lifted, the committee advanced the nominations to the floor.

“They should be ashamed,” he said. “The only thing missing was a member from the minority side,” Hatch continued.  But, as I noted, they, on their own accord, refused to participate in this exercise.

Hatch said he made the move after getting an OK from the Senate Parliamentarian Office and that every Republican member of the committee was present and voting, exceeding the one-third requirement for a so-called “quorum.”